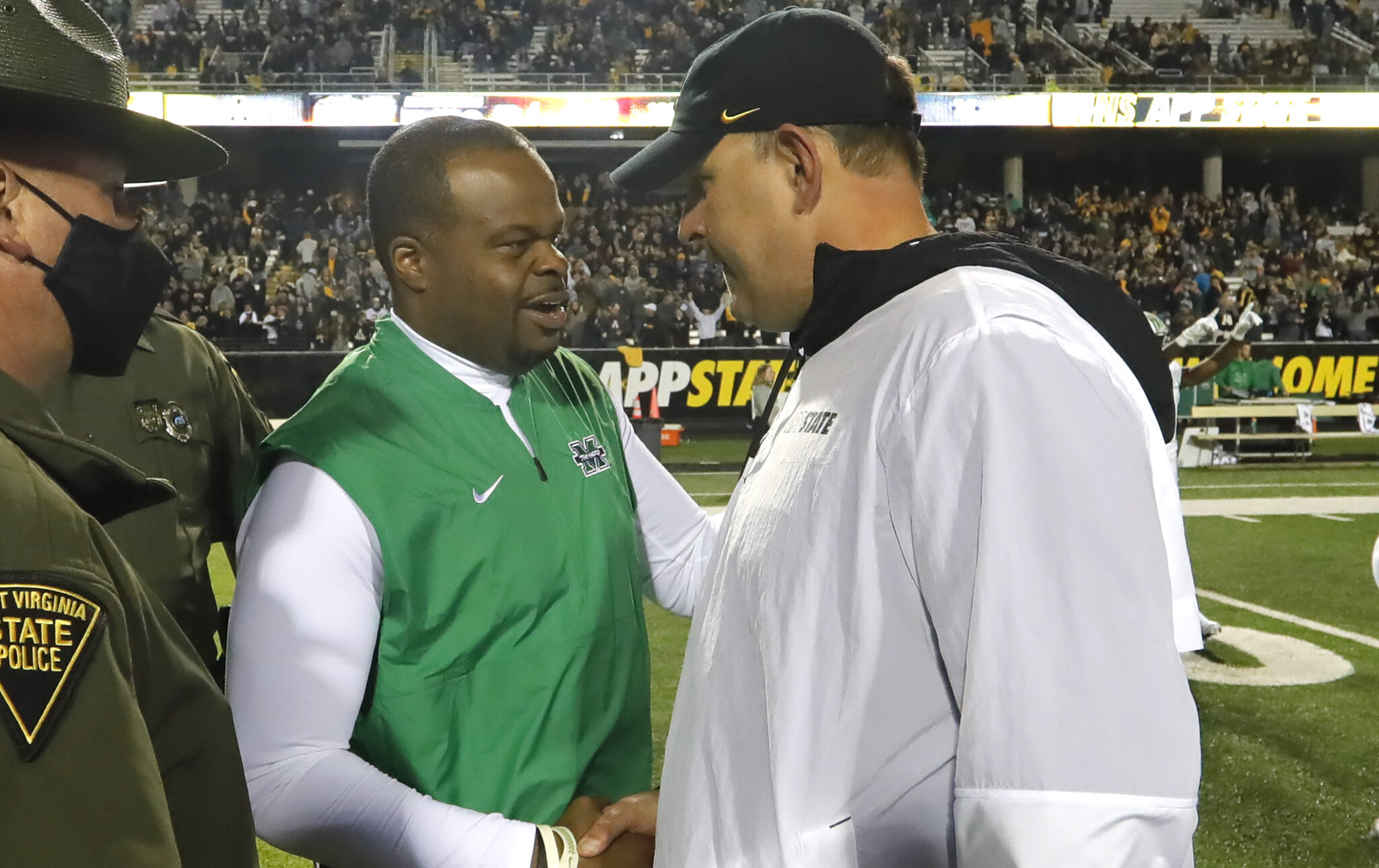 Marshall, which put a fast-paced, explosive offense on display in wins over Navy and North Carolina Central, watched East Carolina and Appalachian State work comeback magic in the fourth period in a span of six days.

The second painful experience happened Thursday night with a national television audience watching on ESPN. Appalachian State trailed 30-21 entering the fourth period, then scored 10 straight points to pull out a 31-30 thriller in front of 28,377 fired-up fans at Kidd Brewer Stadium.

Still, Huff sounded anything but down after the two narrow setbacks.

The Herd has extra time to now get ready for Conference USA play where it was voted preseason favorite to win the East Division. That league opener is October 2 at Middle Tennessee.

Appalachian State took the lead for good with 5:45 left when Chandler Staton drilled a 45-yard field goal. The Mountaineers then made a key stop, forced a punt and ran out the final 4 minutes behind Nate Noel to secure the win for coach Shawn Clark, who experienced the flip side of emotion a year ago when the Herd won 17-7 in Huntington.

“Those were two great football programs, two great universities, that battled to the very end,” Clark said in postgame remarks. “It was a 15-round heavyweight fight, and we were the last team standing.”

The biggest crowd for a midweek game at Kidd Brewer Stadium gave the Mountaineers (3-1) a lift as they climbed out of that nine-point hole and erased a fourth-quarter deficit in a win for the first time since midway through the 2017 season at Idaho.

Following Staton’s go-ahead field goal, the Herd moved into Appalachian State territory. The defense then threw Marshall’s Rasheen Ali for a 6-yard loss on first down. Quarterback Grant Wells got pressure on second down and threw the ball away. A third-down incompletion led to a punt, where the Mountaineers got the ball at their 8.

Noel had gains of 11, 14, 41 and 22 yards on the final drive, smartly going down short of the end zone in the final 2 minutes to prevent Marshall from possibly regaining possession with an eight-point deficit. He finished with a career-high 187 yards on 20 carries.

“I remembered the situation and knew to fall,” Noel said. “I was thinking about the Todd Gurley situation that happened when he fell and scored accidentally and they came back and won.”

Sutton said he was confident his TD catch at the left edge of the end zone would count. Officials reviewed the play and confirmed that Sutton dragged his back foot on the black end-zone turf just before his lead foot hit the turf out of bounds.

“I definitely practice it and feel like I have a good understanding of where my foot is when it’s still in bounds a little bit,” said Sutton, who used similar footwork on a highlight-reel catch against Troy in 2018. “This was a little closer and I wasn’t sure I was in until the replay.”

Camerun Peoples scored three first-half touchdowns, including one on a 2-yard run four seconds before halftime, to help App State take a 21-20 lead into the locker room.

Marshall’s defense had an interception and fumble recovery in the third quarter and turned the miscues into 10 points for a 30-21 lead with 4:16 left. Shane Ciucci, who made his first start as placekicker, nailed a career-best 46-yarder and Ali added an 8-yard TD run for the 10 points.

Just like East Carolina, the Mountaineers dominated the fourth period. The Mountaineers totaled 111 yards rushing, including 104 by Noel on nine attempts. Brice went 5-for-5 for 86 yards and Marshall was held 71 yards.

Ali carried 17 times for 83 yards and returned a kickoff 97 yards for a TD on a fake reverse in the second period. The freshman now has 10 touchdowns — eight rushing, one receiving and the kickoff return. That’s two more than any other non-quarterback in major college football.

Tight end Xavier Gaines had five catches for 104 yards and a 56-yard TD in the second quarter. Wideout Shadeed Ahmed had a career-best four catches for 81 yards.

“We all have to be better,” Huff said. “We have to finish the game out better in all three phases.”