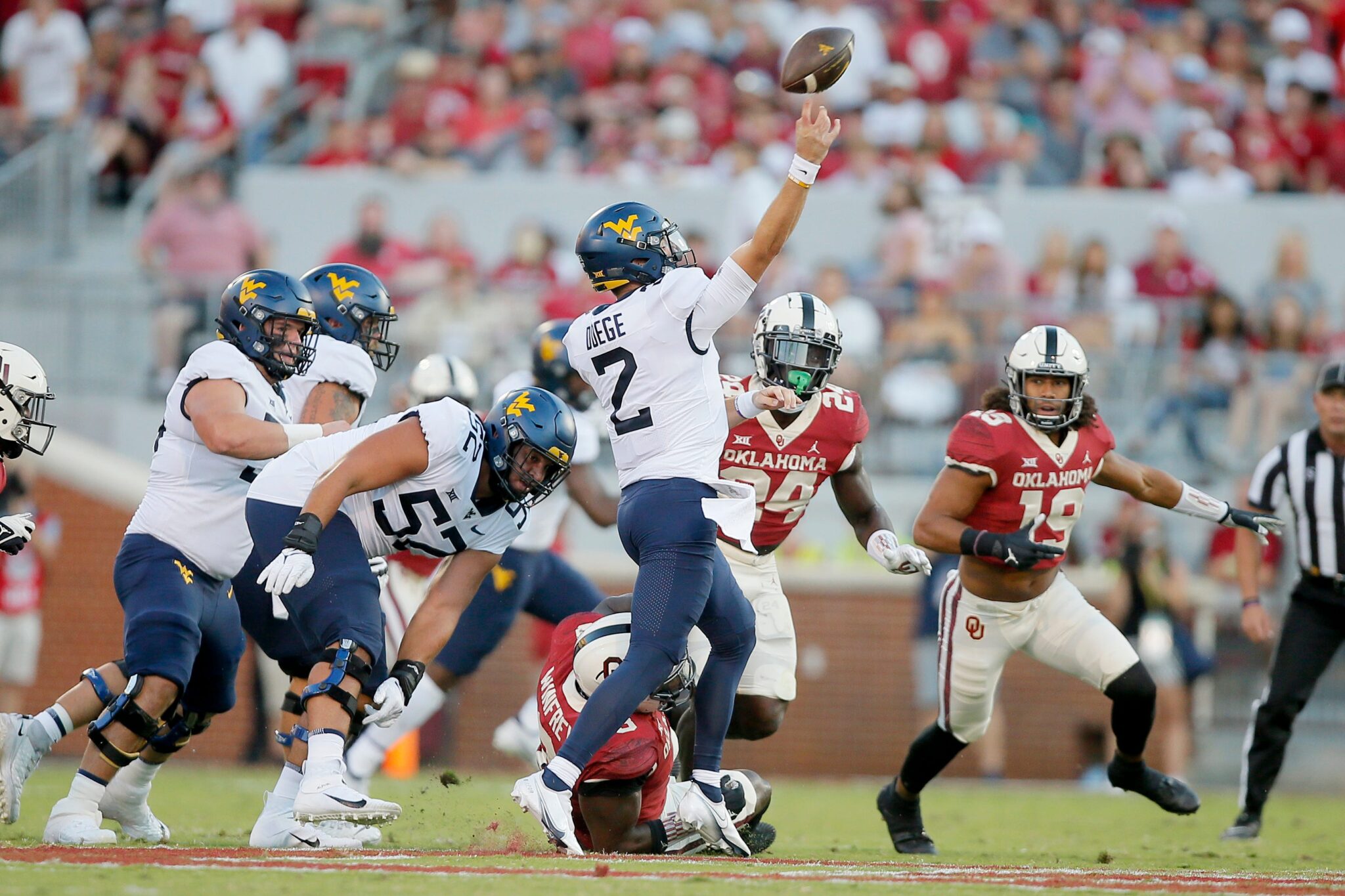 MORGANTOWN, W.Va. — While there were plenty of positives to build off of for West Virginia’s offensive line in last Saturday’s matchup with Oklahoma, the unit will ultimately be remembered for costly mistakes in a 16-13 loss to the Sooners.

On the Mountaineers’ opening series of the second half, Parker Moorer was whistled for a false start on the OU 1-yard line, and WVU ultimately had to settle for a field goal.

On West Virginia’s final possession, sophomore center Zach Frazier was plagued by an errant early snap that quarterback Jarret Doege wasn’t expecting, resulting in a 21-yard loss on what proved to be the Mountaineers’ second to final offensive play.

“Zach Frazier played his ass off,” third-year head coach Neal Brown said. “He played well. Zach Frazier is, if not our hardest worker, he’s in the conversation — not to hurt anybody else’s feelings. He’s the most prepared. He’s one of our best practice players. He does everything that gives you an opportunity to perform well on Saturday night.

“We had 63 countable snaps, 59 of those were pretty good. He’s playing against some really good players in there. He did a great job. He just had two bad plays. There’s not a whole lot of correcting to it. It was a bad play.”

The Oklahoma defense finished with one sack against WVU. The Mountaineer offensive line has allowed two sacks in the last two games, and the coaching staff has been impressed with the weekly improvement from this year’s group.

“Our guys played physical,” said WVU offensive coordinator Gerad Parker. “Did we have moments? Of course, and you are going to in big-time games like that. Our guys got some surge, especially in the first half. We handled movement well. We believe we took a step, and we think they have taken a step the last two weeks.”

Frazier is joined up front by guards James Gmiter and Doug Nester, while Brandon Yates is at left tackle and Moorer and Wyatt Milum split time at right tackle.

As a true freshman in 2020, Frazier played center, while Nester is in his first year at WVU after transferring from Virginia Tech.

Milum is a true freshman and Yates and Moorer are both sophomores.

“In the Virginia Tech and Oklahoma games, the communication got better, we trusted each other more, and we played harder for each other,” Yates said.

The Mountaineers’ three-point loss was their closest margin of defeat against the Sooners since joining the Big 12.

Still, late mistakes led to a quiet locker room, but Yates remains optimistic about what’s ahead.

“The feeling we had afterward was that we lost, but we can learn from the situation,” Yates said. “It is early in the season, but we have a lot to grow from through the season.”

While a lack of depth could prove problematic as the season progresses, WVU will look to continue its improvement and development up front in Saturday’s Big 12 home opener against Texas Tech.

Doege remains the starting quarterback, but Garrett Greene will continue to spell him at times and get snaps behind center.

Thus, the Mountaineers’ offensive line will continue be asked to protect for two different signal callers with opposing styles.

“We have a small margin for error,” Yates said. “It is hard playing my position. Not a lot of people can play do it. When you do mess up and get into situations where you do get beat, you have to remember to keep playing.”