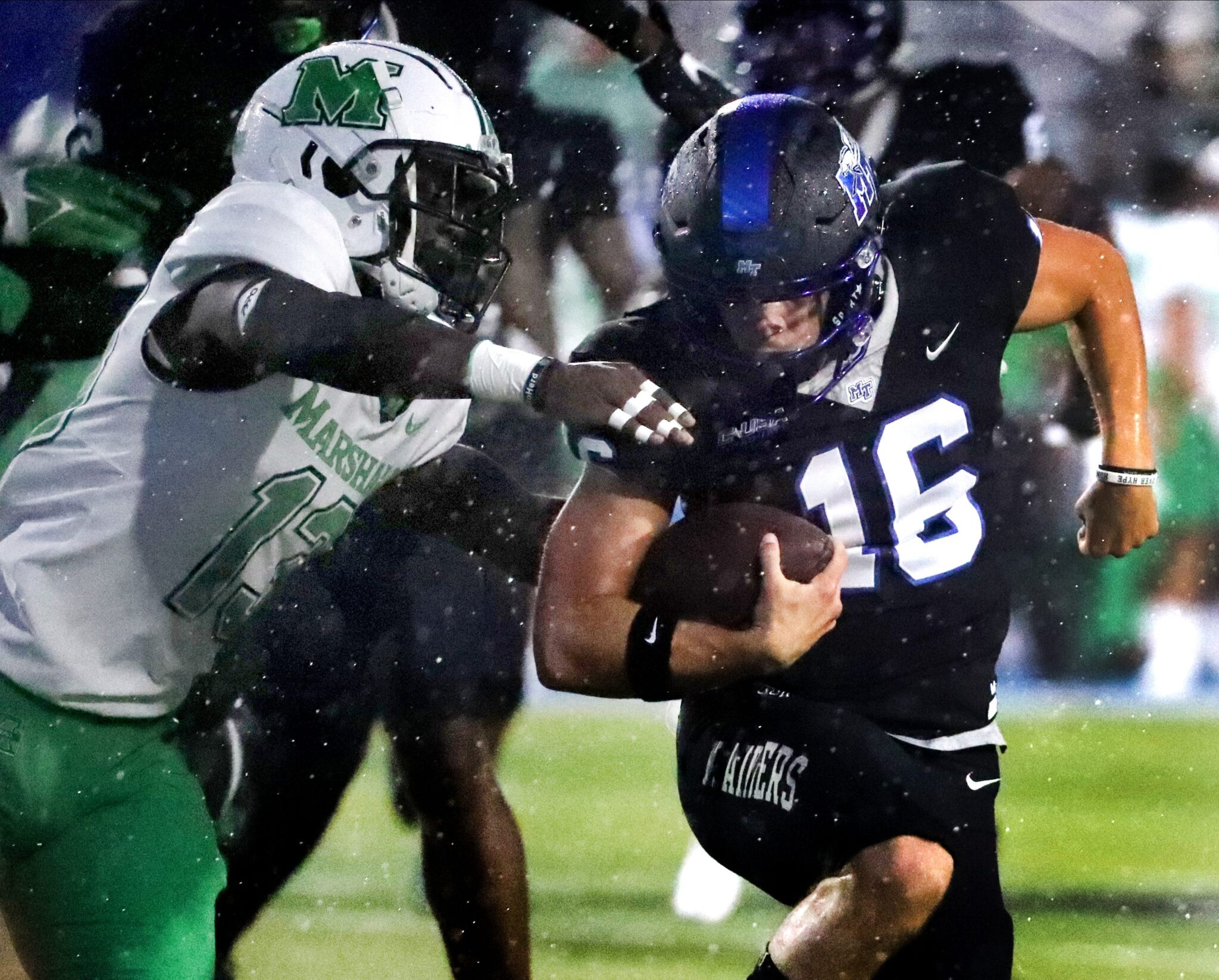 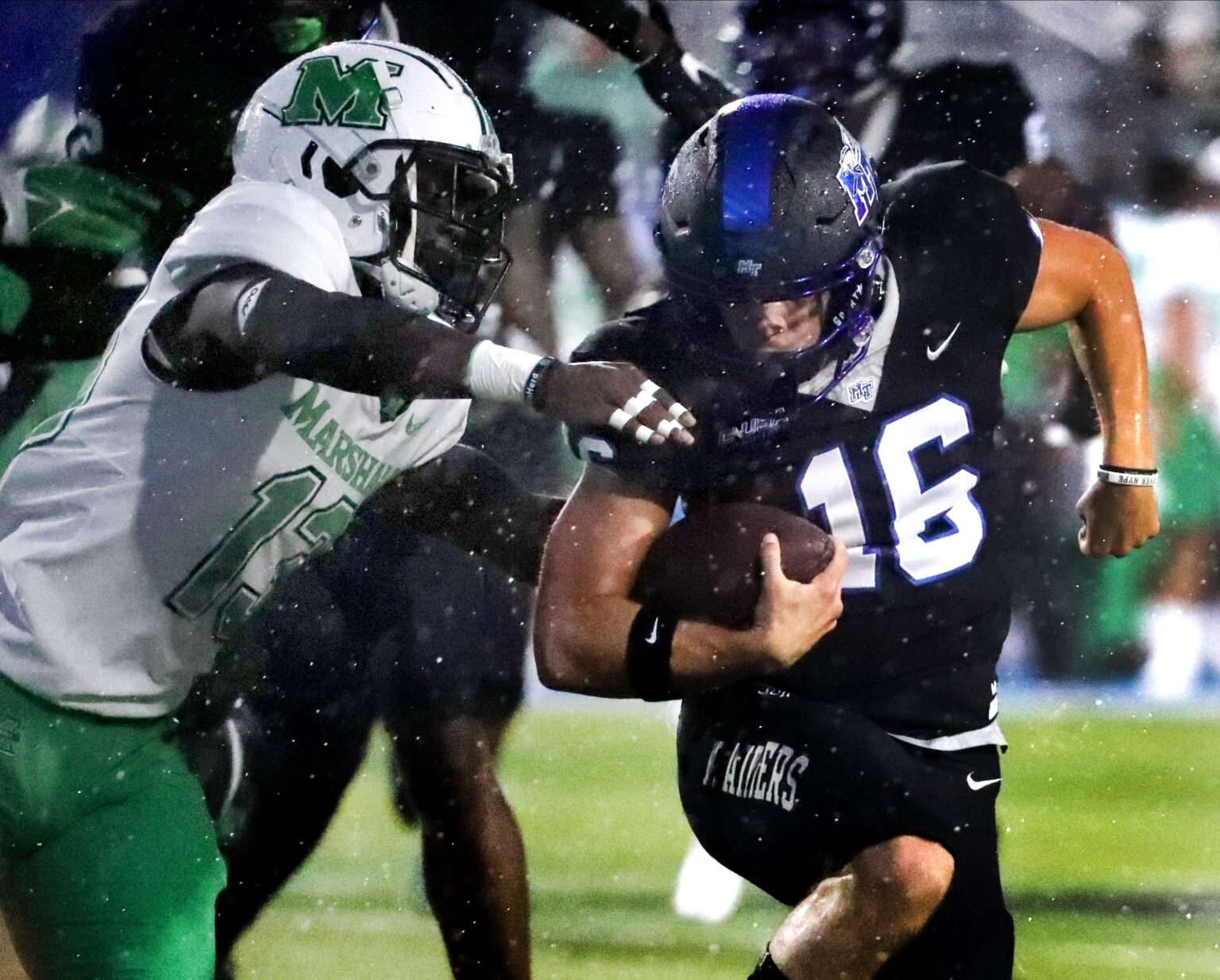 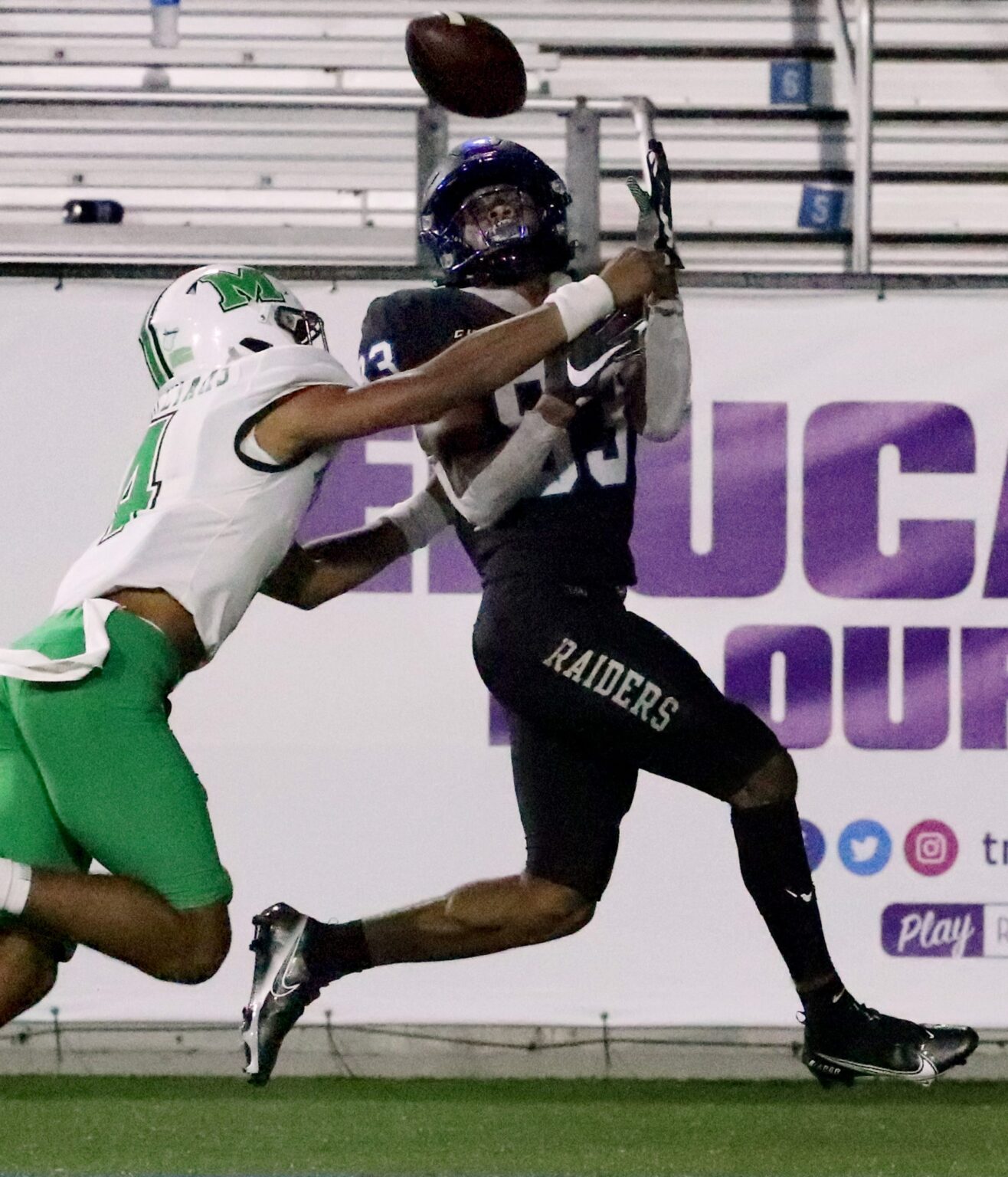 MTSU wide receiver Jaylin Lane (83) catches a pass and runs the ball in for a touchdown as Marshall defensive back LeAnthony Williams (4) covers him on Saturday, Oct. 2, 2021. Syndication: The Daily News Journal 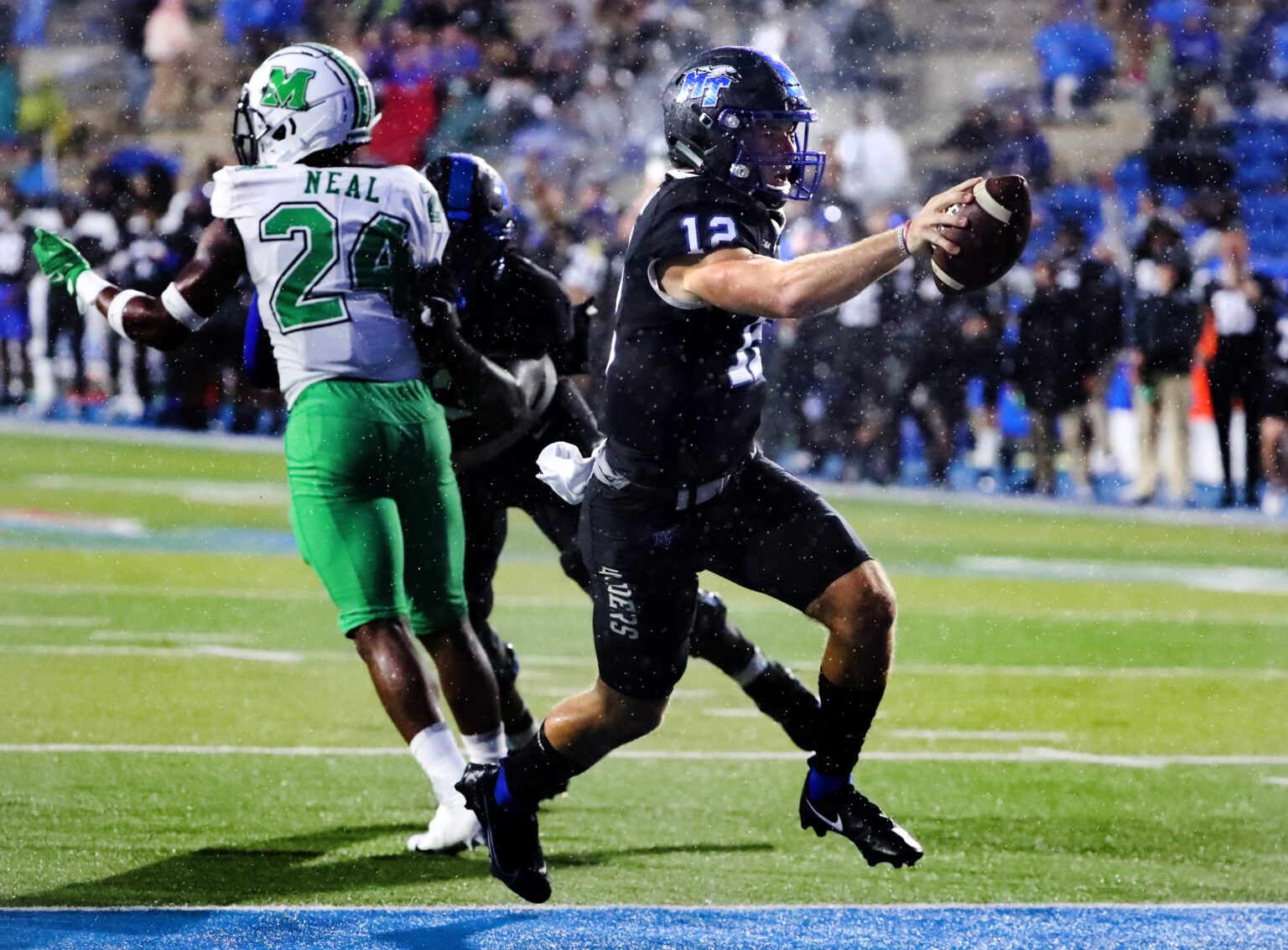 MTSU Mike DiLiello (12) holds the ball out as he crosses into the end zone to score a touchdown against Marshall on Saturday, Oct. 2, 2021. Syndication: The Daily News Journal 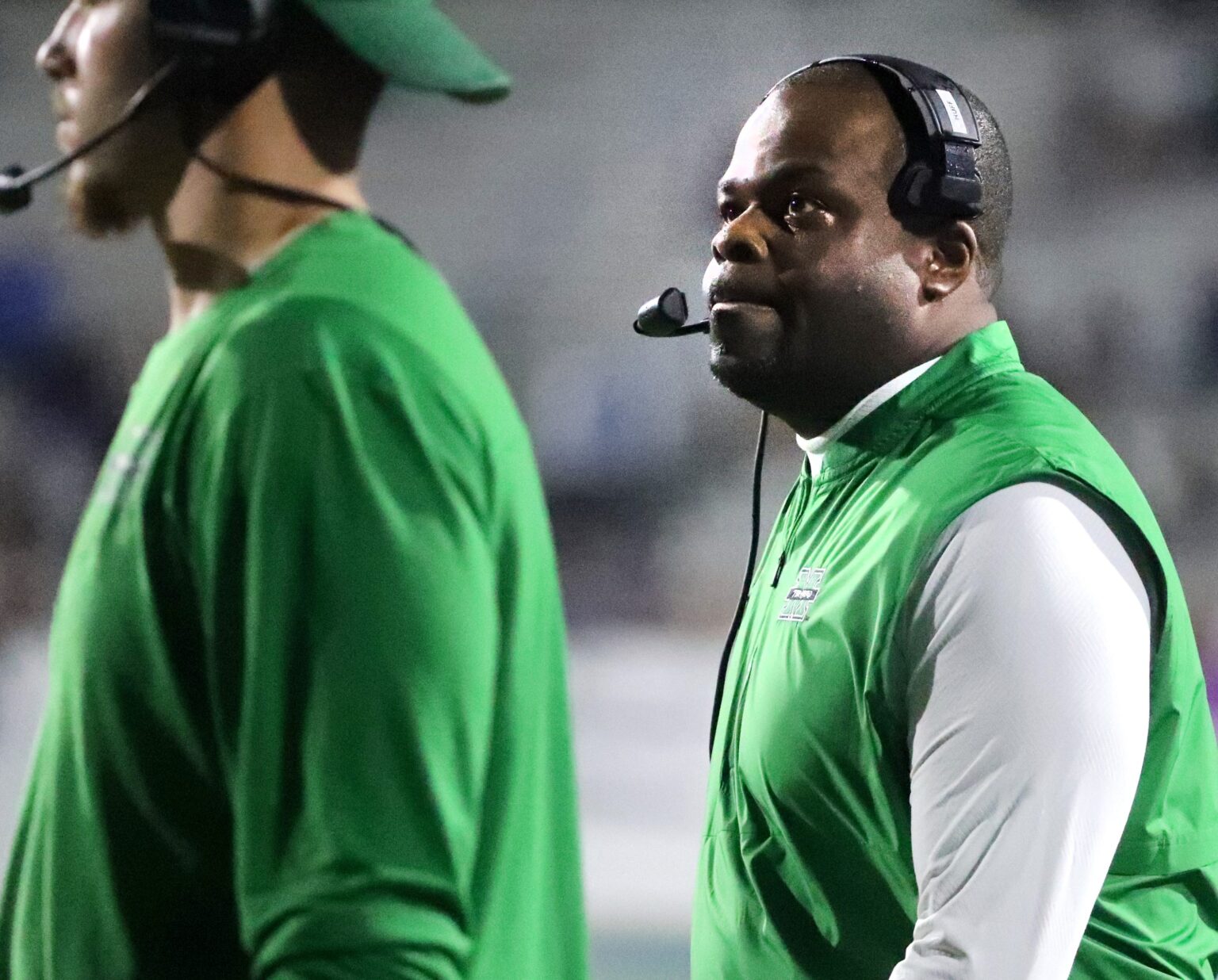 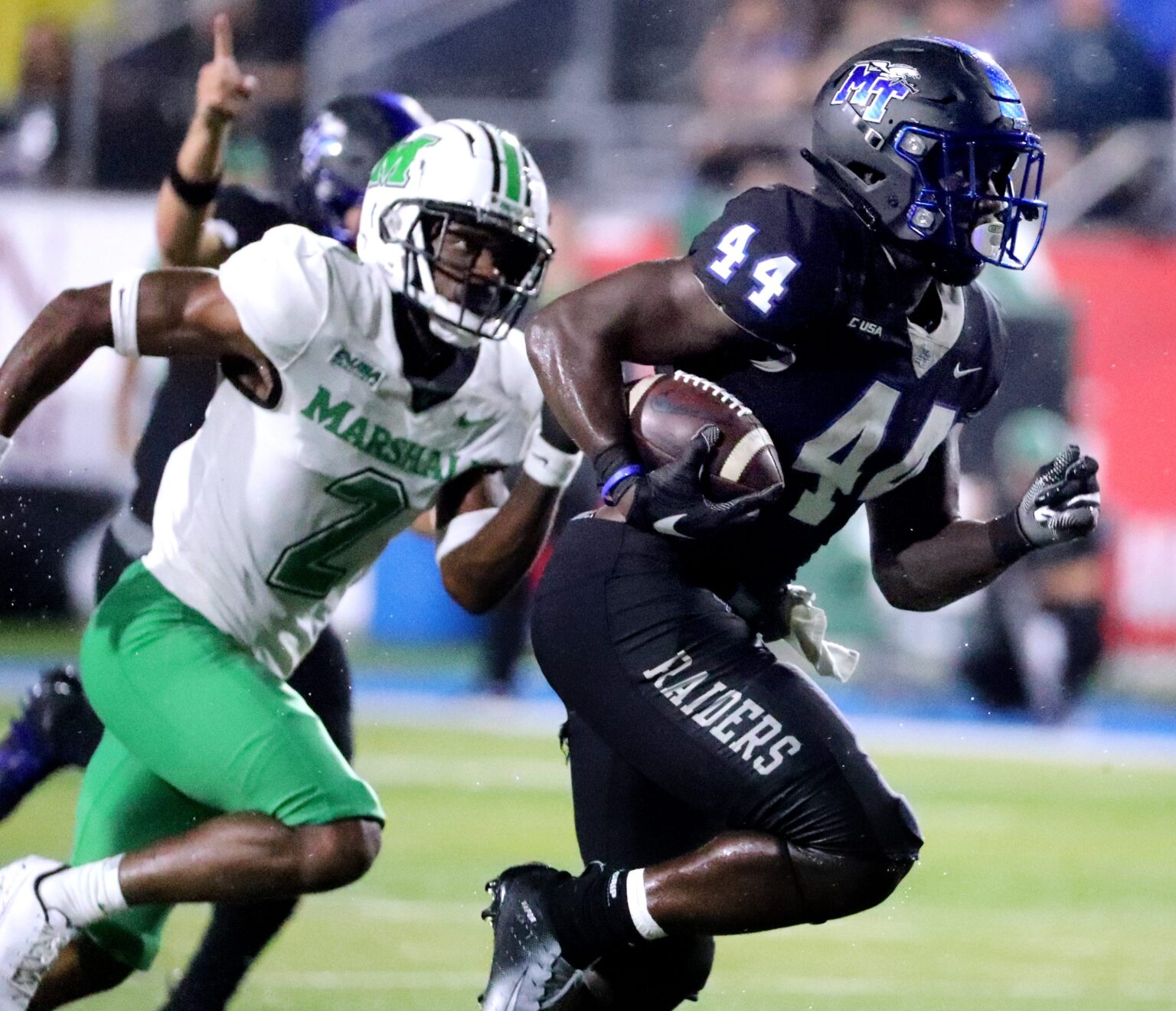 MTSU running back Chaton Mobley (44) runs the ball in for a touchdown as Marshall safety Cory McCoy (2) tries to catch up on Saturday, Oct. 2, 2021. Syndication: The Daily News Journal 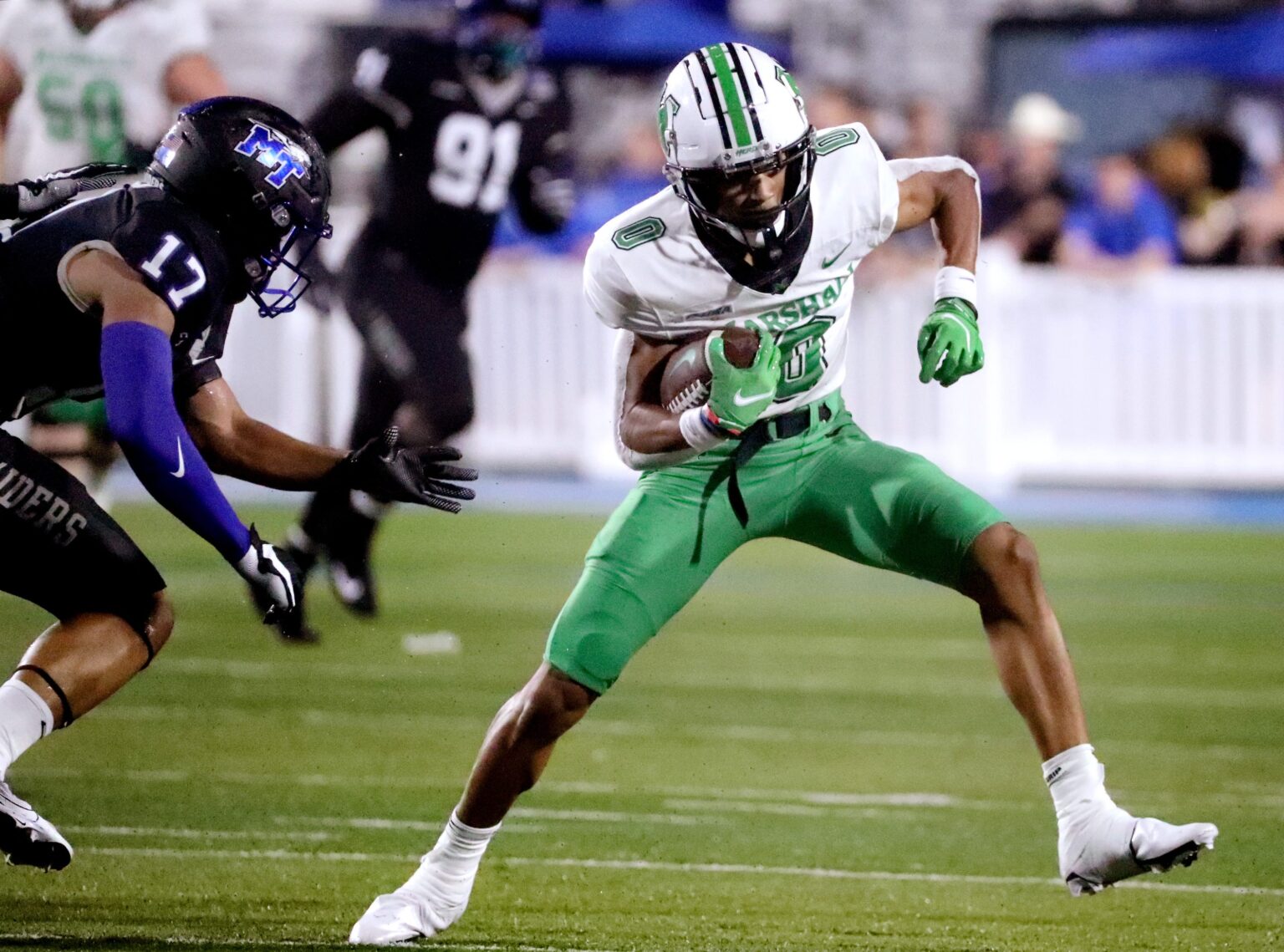 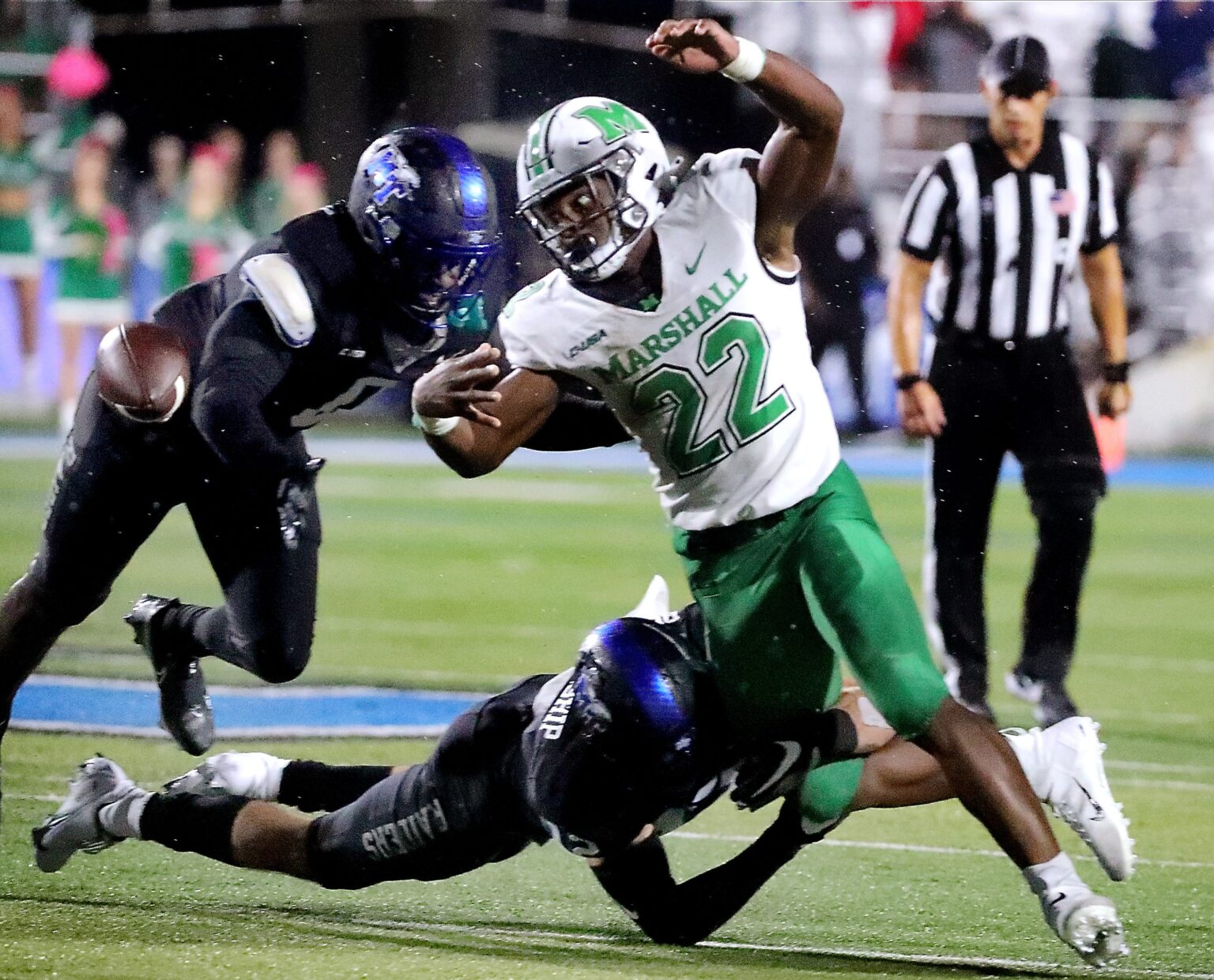 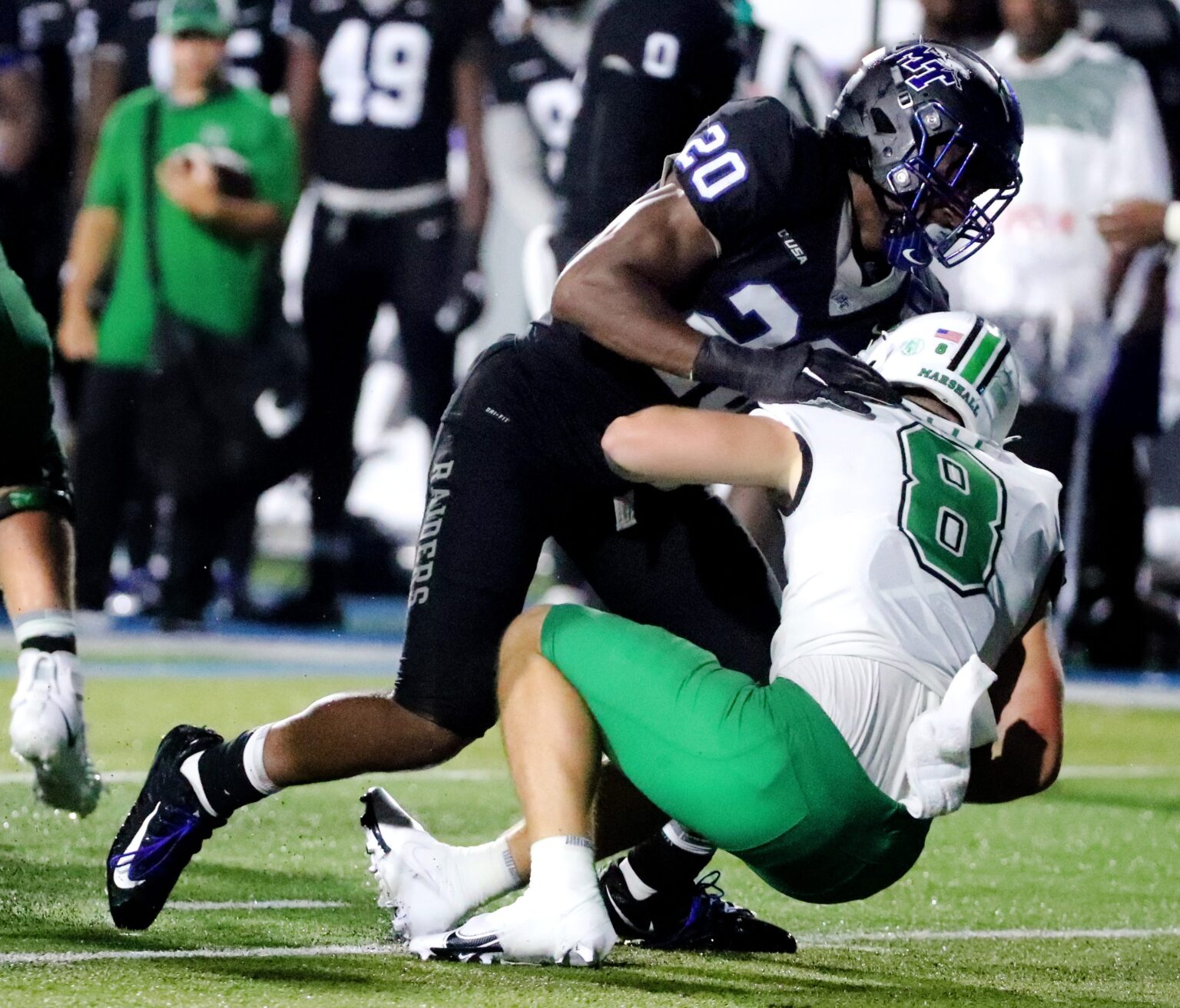 Marshall turned the ball over six times, yet found a way to make things interesting down the stretch before an illegal touch on an onside kick with 1:12 left allowed Middle Tennessee State to wrap up its 34-28 win.

The Blue Raiders, meanwhile, managed to make the annual “Blackout” game and Hall of Fame weekend a success, while ending a three-game losing streak.

“It’s going to be hard to beat anybody with that amount of turnovers and sloppiness we played with,” first-year MU head coach Charles Huff said. “I appreciate the fight. We put ourselves behind the eight ball. We’ve got to be cleaner. We’ve got to fix things — coaches and players.”

When linebacker Reed Blankenship scooped up a fumbled and sprint untouched 91 yards for a score, Blue Raiders fans at Johnny “Red Floyd” Stadium in Murfreesboro, Tenn., had plenty to celebrate with a 34-14 lead late in the third period in the Conference USA opener for both teams which featured steady, heavy rain.

The Thundering Herd (2-3, 0-1) and its play-fast offense generated scoring drives of 89 and 97 yards to cut the lead to 34-28. Herd quarterback Grant Wells connected with Shadeed Ahmed for a big first down on a fourth down needing 11 yards for a first — they got 16. The 17-play drive ended with a 2-yard TD run by freshman Rasheen Ali, who now has 11 rushing TDs and 13 total.

The Herd defense got a stop after Wells suffered his second interception on the next drive, and forced a punt which the Blue Raiders got to the 3-yard line. Wells kept the fast-paced attack motoring and moved the visitors on a 97-yard drive with the TD coming on a 17-yard pass to Ahmed, his first score of the season.

Marshall set up for an onside kick with 1:12 to play, Ali got the ball and a miracle finish appeared possible. Instead, officials ruled the ball didn’t go the necessary 10 yards first and a review confirmed the call. The Blue Raiders then ran out the clock as Marshall suffered yet more disappointment at Middle Tennessee State where it’s 1-4 now.

“When we didn’t turn the ball over, we moved it efficiently,” Huff said. “We’d get some momentum and then have a turnover. Defense got off to a slow start, but rallied at the end. I never felt we were out of it. We had to get out of our own way. If you can’t play clean, you can’t be successful.”

The Blue Raiders scored on their first drive going 62 yards in 10 plays. Backup quarterback Mike DiLiello came in to cap the march with a 3-yard TD run. The black-clad squad never relinquished the lead.

The Blue Raiders took a 14-0 lead when quarterback Chase Cunningham tossed a 13-yard TD pass to Jarrin Pierce. He was ruled out of bounds, but after a review, the call was reversed with 12:41 left in the second period.

Marshall’s offense came to life and after a 39-yard strike from Wells to Willie Johnson for a first down at the 12-yard line, Ali went over on the next snap.

Middle Tennessee appeared to gamble when it went for it on fourth-and-2 at the Herd 41. The gamble paid off as Chaton Mobley raced up the middle untouched for a 41-yard TD and 21-7 lead. That run was the longest from scrimmage for the Blue Raiders this season. He finished with 132 yards on 15 carries. They rushed for a season-high 209 yards.

The lead reached 28-7 when the Blue Raiders recovered a fumble at their 31 and went 69 yards for the TD. Cunningham found Jaylin Lane down the left sideline for a 34-yard TD as he beat 1-on-1 coverage.

Marshall fumbled again on its next possession, but the defense forced a punt only to see Kyle Ulbrich boom a 76-yarder for touchback. The Herd reeled off an 80-yard drive capped by Ali’s 1-yard TD run. It appeared Wells had connected with Jayden Harrsion for a 12-yard score, but a review showed he went out a the one.

Ali rushed for 121 yards and the three scores, but also fumbled twice in Middle Tennessee territory. Announced attendance was 15,806. Final statistics were not available due to computer issues at the game site.