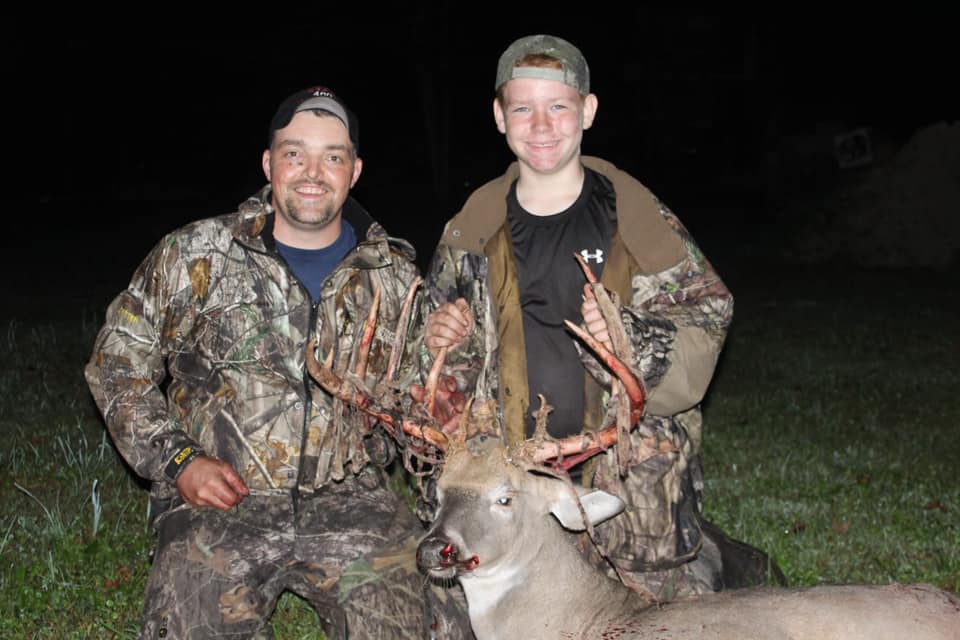 SETH, W.Va. — When Joe McCormick and his 12 year old son Jaxson made their way to their hunting lease in Boone County back on October 2nd, the understanding was clear, it was Jaxson’s hunt.

“I give God the credit and I’m really fortunate I’m able o take my son hunting. So he knows when he’s with me, whatever comes in is his. I didn’t even have a bow, I was just sitting there coaching him and mentoring him through it,” said Joe.

Joe was aware of several bucks in the area, and figured one of the two or three decent eighth pointers he had seen on his cameras in the area would present Jaxson a good shot. However, as darkness approached, the father-son duo caught a glimpse of something to their right.  It was something much, much bigger than a run of the mill eight pointer.

“It was not quite dark, you could still see. We looked to the right and we saw him coming and I waited so I could get a better shot at it,” said Jaxson.

What they saw was a buck Joe knew well.

“We knew about th

is particular deer for four years now. He was a nice 10 pointer in 2018. I actually shot the deer and tracked him two or three miles but I was never able to recover him,” Joe explained.

Figuring the deer was lost, a neighboring property owner produced a picture of the buck in December 2018 which revealed he had survived the shot and was still haunting the dark hills and hollows.

“He wasn’t nearly as big then as he is now,” laughed Joe.

Jaxson eyed up the massive buck with his crossbow.

“From the time we first saw him to the time Jaxson shot him was about two minutes,” Joe said.

Jaxson indicated he didn’t even have time to get nervous.

“I had the nerves for him. I couldn’t even talk after he shot.,” Joe said.

Neither was able to determine where the bolt struck the deer. Joe surmised it “sounded” like a good hit. They called for backup and with the help of friends located the massive buck about 75 yards from where he had been shot. Jaxson had put a double lung shot on the animal, but since it was a little higher than usual, the blood was minimal.

It was quite a beast.

The unofficial green score was 170 2/8ths by Joe’s brother who he said is usually very close. Joe believed the buck’s rack would net in the 160’s for an official score.

The buck still carried nearly half of its velvet with bloody pieces still draped over each of the points. During the butchering process it was determined a wound on the deer had healed over, but may have been the cause of late loss of velvet.

It’s a buck of a lifetime for father and son, and Jaxson confirmed his buddies at Sherman Middle School were buzzing.

Outdoors
Youth hunting season this weekend in W.Va.
Kids ages 8 to 17 can hunt for deer this weekend in 51 of the state's 55 counties.
By MetroNews Staff
Outdoors
Fall trout stocking is a much anticipated event in W.Va.
Two seek fall trout stockings run from October 18-29
By Chris Lawrence
Outdoors
Volunteers continue to pull vast numbers of tires from the Tug Fork
Organizers of tire removal call it cleaning up for the "sins of our fathers"
By Chris Lawrence
Outdoors
Hunter finally catches up with his 'ghost deer' in Clay County
Jesse Truman of Big Chimney had a long history with the buck he wanted and knew if he didn't get him early, he might not get him at all.
By Chris Lawrence
View AllHoppy's Commentary