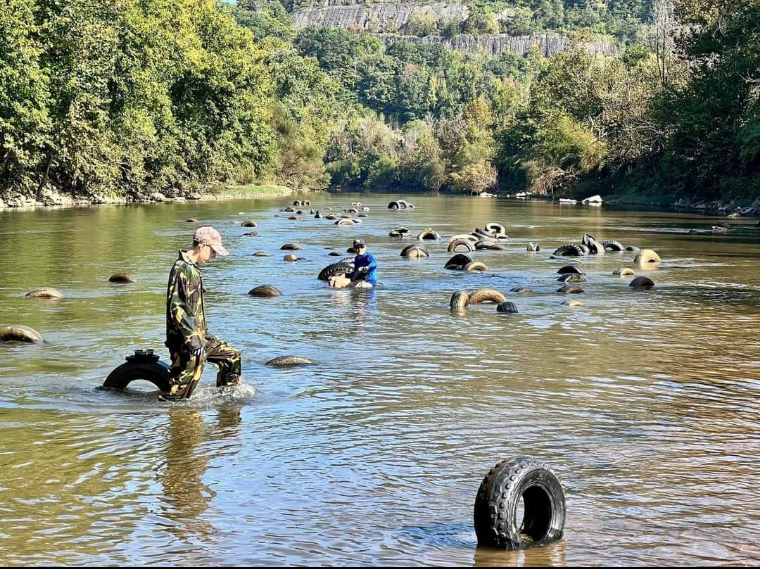 Volunteers recently waded the Tug Fork River and engaged in the cumbersome process of removing thousands of old tires from the waterway. PHOTO: Friends of Tug Fork River

WILLIAMSON, W.Va. — Volunteers recently fished more than 2,500 tires out of the Tug Fork River near Williamson. It’s the third year of an effort to remove the tires which have been in the water for decades.

“It’s shocking how many tires are in there and it’s really a shame,” said John Burchett with the Friends of the Tug Fork River during a conversation on West Virginia Outdoors.

Burchett called it cleaning up the “sins of our fathers” referring to a time when tossing old tires into the river was considered the most effective way to get rid of them. The practice went on for years before people started to realize there was a better way.

“Most of these tires have been in the river for decades. We’ve pulled out some of them that are white walls and some of them with six inch white walls,” he explained, referring to tire styles from the 1940’s and 50’s.

According to Burchett, who formerly worked for the West Virginia Division of Environmental Protection, the tires aren’t necessarily posing a risk of chemical contamination to the water, but they are unsightly in the river. Volunteers and local organizers have been trying to change the image oft he Tug Fork in recent years and clean up the river’s image as they clean up the water.

“We have a really bad two-state problem and now working with West Virginia and Kentucky we have a two state solution,” he said.

West Virginia’s DEP REAP program became involved in the effort in 2018 and volunteers worked to remove close to 2500 tires that year. During 2020, Covid significantly scaled back the effort and volunteers locally only removed about 150 to 200 tires. During the 2021 event, the state of Kentucky joined the effort as well and another 2,000 or so were taken out.

The tires in West Virginia are shredded and put into a mono-fil landfill in Nicholas County. The theory is to keep them stored there until a better use for old tires is found and they can be mined years from now. The state of Kentucky’s environmental regulators are engaged in a pilot project to test using the old tires as an additive to asphalt. The experiment, according to Burchett, has shown promise.

He said the most significant development of 2021 was been getting the Kentucky agency involved. The effort will continue with more tire removal projects in the years to come. The Friends of Tug Fork organization has focused on cleaning up the river and Burchett said the work is starting to pay off. Smallmouth bass are becoming abundant, bald eagles frequent the waterway and otters and beavers are are often observed.

“We’ve got a tremendous fishery, it’s a beautiful river. The history of this river is not the best, it was a trash dump, but it is no longer. We still get a few bottles washing down during high water, but nothing like it used to be. It’s a beautiful river.” said Burchett.

Outdoors
Youth hunting season this weekend in W.Va.
Kids ages 8 to 17 can hunt for deer this weekend in 51 of the state's 55 counties.
By MetroNews Staff
Outdoors
Fall trout stocking is a much anticipated event in W.Va.
Two seek fall trout stockings run from October 18-29
By Chris Lawrence
Outdoors
Twelve-year old hunter downs a massive Boone County buck
A Saturday evening hunt becomes a story a father and son will never forget.
By Chris Lawrence
Outdoors
Hunter finally catches up with his 'ghost deer' in Clay County
Jesse Truman of Big Chimney had a long history with the buck he wanted and knew if he didn't get him early, he might not get him at all.
By Chris Lawrence
View AllHoppy's Commentary