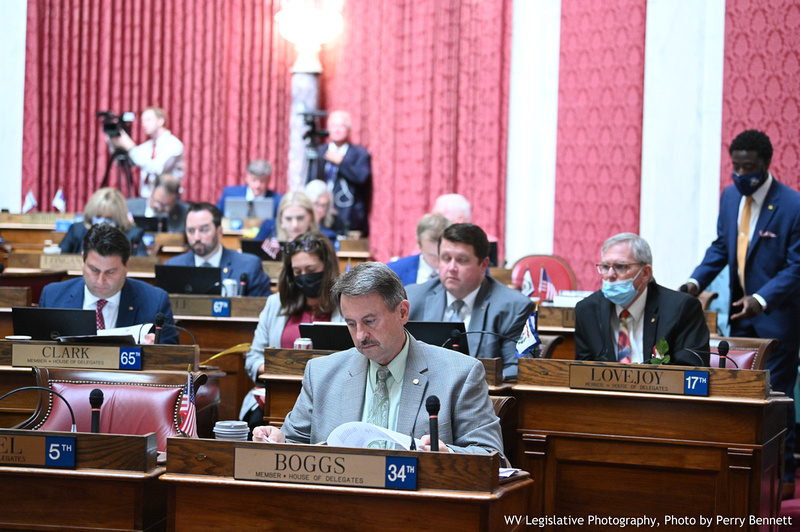 The House Redistricting Committee approved a map of 100 single-member districts, although the map would still need to be passed by the full chamber and then the Senate.

The map that was adopted had some border changes from a version floated earlier, adjustments generally described as trying to even out boundaries.

But one change stood out from others.

Delegate Shawn Fluharty, D-Ohio, asked about the reasons for an updated boundary for the proposed 48th District, which would include part of Pocahontas, Nicholas, Greenbrier and other counties.

The change was made from the original proposal, where the area had been numbered as District 20, when Delegate Brandon Steele brought up the presence of the headquarters for the National Alliance, a white supremacist group, in Pocahontas County.

On the map originally rolled out for redistricting, that would have put the National Alliance in an area represented by incumbent Caleb Hanna, one of the House’s three Black members. Hanna is a 21-year-old Republican from Nicholas County.

Steele, in a telephone interview this afternoon, said he proposed a change to redistricting committee leaders to keep Hanna out of having to campaign in a community with a white nationalist headquarters. That change was reflected in the map that was approved by the committee today.

“I immediately thought of what position that put our delegate who is African-American in. What kind of position does that put him in to go and campaign in that place?” said Steele, R-Raleigh.

“This is not a thought about him winning and losing. This is a thought about his personal safety and what kind of message does that send to the rest of the world. I think it would be irresponsible and incomprehensible for us to take the only elected African-American Republican in the House of Delegates and district him in that manner.”

Steele said he would have favored making that call regardless of the party of the delegate in that situation.

“What it really was, was us trying to do the right thing — which we would do for Democrat, Republican, independent, doesn’t matter,” he said.

One of the Legislature’s Black delegates, Danielle Walker, D-Monongalia, tweeted that the same consideration should be given to any minority candidate.

Please tune in to the WV Redistricting meeting. The change of proposed District 48 is because the National Headquarters for the Aryan Nation would be an area where the current incumbent is a person of color could serve. Protect all minorities and candidates.

Changes were made from the original map proposal to boundaries around several counties, including Marion, Monongalia, Putnam, Cabell, Kanawha, Logan and Randolph.

“It’s just pure coincidence? Is that what your position is?” Fluharty asked about the number of Democrat versus Democrat matchups that could result from the current map.

Democrats proposed amendments that would have affected boundaries around Marshall and Mingo counties, but those proposals were voted down by the committee.

The consideration of the maps is part of the constitutionally-required process that occurs every decade with a new Census. Gov. Jim Justice called a special session starting today for lawmakers to work through the process.

The House has not yet made any decisions on congressional maps. A public hearing about redistricting is scheduled for 8 a.m. Wednesday in the House of Delegates chamber.

The state Senate’s redistricting committee was meeting at 3 p.m. today.