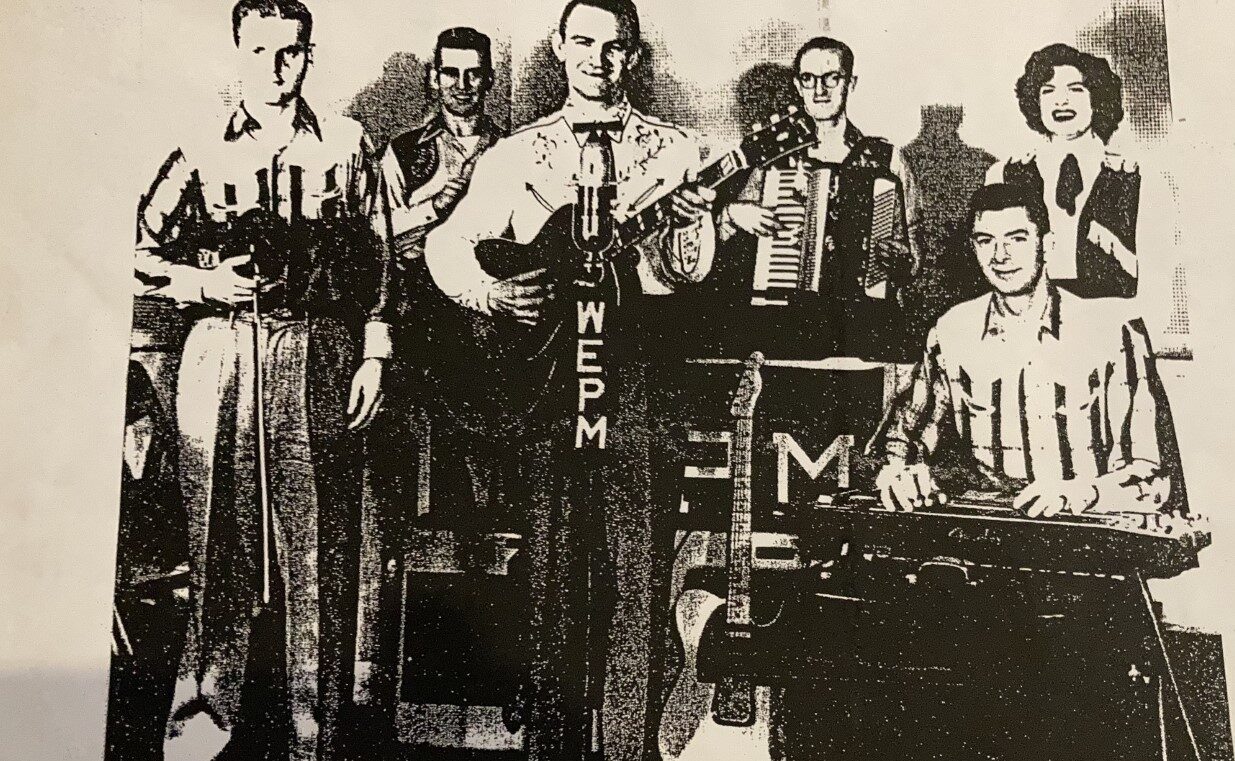 Patsy Cline performed live with Bill Peer and the Melody Boys at WEPM in its early years.

MARTINSBURG, W.Va. — WEPM in Martinsburg went on the air for the first time 75 years ago Wednesday.

It was Oct. 13, 1946. The nation had marked the end of the second World War the year before. Martinsburg businessman C. Leslie Golliday and his father-in-law C.M. Zinn purchased used military equipment to convert to use on their radio station.

It was the first radio station in the Eastern Panhandle.

In the beginning, it served up a mix of musical formats with a large dose of news and local programming.

During its 75-year-history, a lot of live sports went out over the airways, from local teams to national and in between.

Guy Chicchirichi of Guy’s Buick-GMC Inc. in Ranson remembers moving the radio around his room at night to catch WEPM’s signal and hear WVU football games growing up.

WEPM was the soundtrack to a lot of the Panhandle’s history. Some of the notables who passed through the WEPM studios were Patsy Cline, who performed with Bill Peer and the Melody Boys live. There’s a picture of the group performing with the WEPM banner, an artifact that still hangs in the on-air news studio where Panhandle Live is broadcast every weekday morning from 9 a.m. to 10 a.m.

Some other famous faces made their way through the WEPM studios, as well, including then presidential candidate John F. Kennedy and his brothers Robert and Edward, President Jimmy Carter, US Senators Robert C. Byrd and John D. Rockefeller IV. Entertainers like Judy Carne of Laugh-in fame and fitness guru Richard Simmons also made appearances in the studio.

In addition to telling the stories and happenings in the Panhandle community, WEPM and its sister studios were a launching pad for a number of local radio personalities, many of whom still work in broadcasting.

The station’s dedication in 1946 featured an opening prayer and live entertainment from local singing groups and a promise from Les Golliday that the station “would be available for use by government and civic groups.”

An early WEPM announcement pledged “News on the Hour – Every Hour – and Music That You Will Enjoy.”

One bit of lore is that WEPM was the first American AM radio station to play the Beatles.

In 75 years, the station had a number of formats, but continued offering local programming that included church services, live coverage of local sports, as well as talk shows that ran the gamut of political discourse, community events, parks and recreation, and horse racing.

One popular show the station still gets comments about was Trading Post, which under Program Director Jay Young served as an on-air classifieds program where listeners could buy or sell or just enjoy participating in the community that gathered around their radios each day.

Some of those working behind the microphones went on to make names for themselves in other industries, serving as mayor of Martinsburg for example, or like John McVey, who wrote a 65th anniversary piece about WEPM for The Journal, a successful career in other media. McVey had been an early program director for the station.

In 75 years, WEPM has broadcast out of four different buildings and hundreds of remote locations, but its focus has always come back home.

Marsha Chwalik began working part time in the news department in 2000 and in 2020 took the helm as news director. “I feel an immense responsibility to honor the talent and determination of those who shepherded WEPM and built that reputation of being a dependable place to hear the news stories that matter and to tell the Panhandle’s Story.”

Jared Parsons is the tenth person to helm the stations in the Martinsburg cluster, which now number five. Of the one that started it all, Parsons says, “Working for a company like West Virginia Radio Corporation, and especially with a legacy station like WEPM, is what people dream of in this business. WEPM has such a rich history in Martinsburg and throughout the Panhandle, and although a lot of faces have walked into that studio and popped on the mic, the same thing has come back out for 75 years -local, timely, and quality content for our listeners. We would not have made it this far if it weren’t for our loyal listeners – who we try to serve every single day. I feel blessed to be a part of WEPM and the Panhandle News Network’s continued growth as we work toward year 100!”

In 1978, Golliday sold WEPM and its sister station WESM (which in later years was known as WKMZ and now Today’s 97-5-WLTF) to Electra Broadcasting Corporation of West Virginia for $875,000. With Chuck Thornton as the general manager, WEPM switched to an all-country format.

In 1987, the stations were sold to Prettyman Broadcasting and by the mid 90s had switched formats to News/TalkSports.

In 2014, Prettyman Broadcasting announced the sale of WEPM to West Virginia Radio Corporation along with its sister stations WICL and WLTF.

Together, WEPM and WCST became branded as the Panhandle News Network, broadcasting local l news, talk and sports around the clock.

The station broadcasts out of the Hoppy Kercheval Building in Martinsburg on 1340 AM and 93.7 FM out of Martinsburg and 1010 AM and 93.5 FM out of Berkeley Springs as well as on www.panhandlenewsnetwork.com