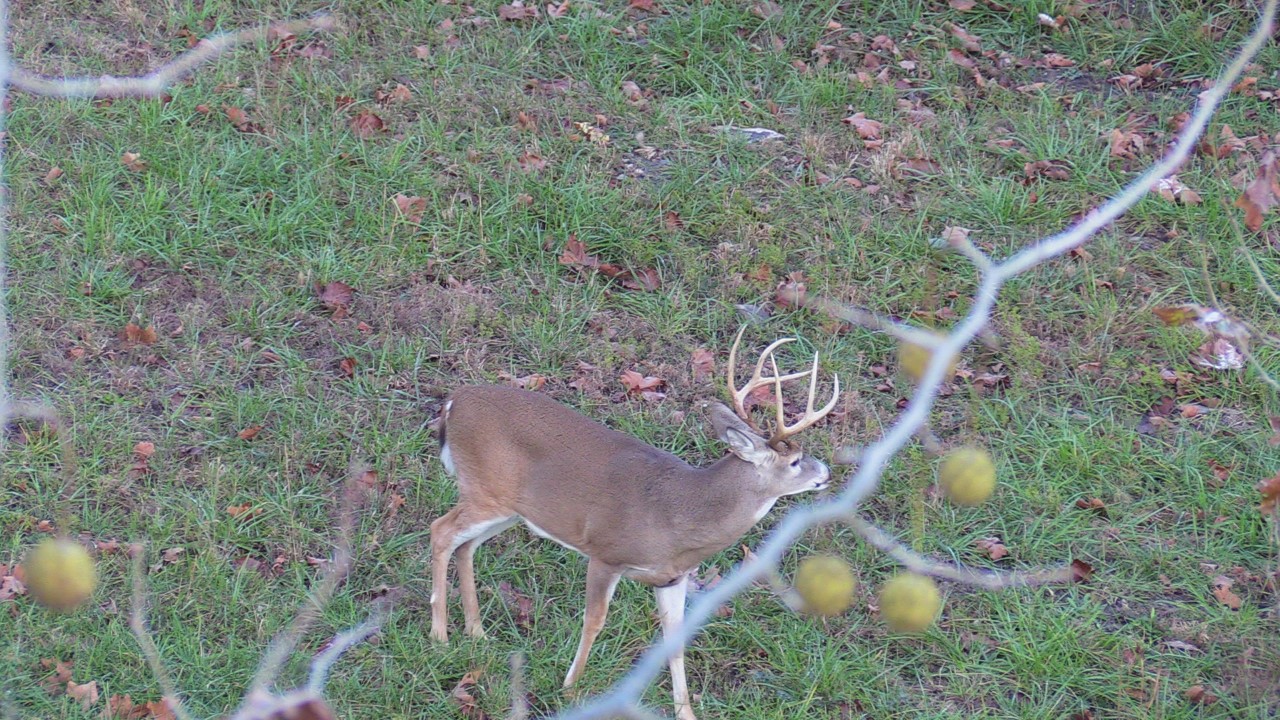 The hot button issue over lowering the buck limit in W.Va. is back before Natural Resources Commission

LOGAN, W.Va. — Although Division of Natural Resources Director Steve McDaniel repeatedly told lawmakers and the press there was no plan to revisit the hot button issue of lowering the buck limit in West Virginia, the matter was resurrected at Sunday’s Natural Resources Commission meeting at Chief Logan State Park in Logan County.

“I’m going to address the 800 pound elephant in the room. The buck limit and the buck issue isn’t going away,” said Commissioner Greg Burnette.

The Commission last year voted against lowering the buck limit from 3 to 2 in what has become one of the most divisive issues in recent memory among West Virginia sportsmen. Burnette asked for the matter to be placed on the agenda for the first meeting of 2022 and potentially voted upon.

“One Senator has called and asked what are we going to do about it? People are interested. We now have children interested,” Burnette said, referencing a video production played for Commissioners in which students from Buffalo High School enacted a skit scripted around the buck limit debate.

Soon after the commission rejected the proposal to lower the limit, Senate Bill 514 was introduced and ultimately passed. The new law retooled the entire Natural Resources Commission, the process of appointments, and the term limit of each commissioner. Although many in the Legislature raised questions about whether the changes were over the negative vote on the buck limit, McDaniel repeatedly maintained it was not. Supporters of lowering the number of bucks West Virginia hunters can kill in a year hailed the change to the Commission believing it improved chances of getting the measure approved.

McDaniel responded to Burnette’s request offering the two new commissioners, Jerod Harman and Janet Hamric-Hodge needed to be provided with all of the information which led up to the previous vote before the matter is revisited.

“We voted on that over a year ago. Two commissioners haven’t received the information on this. I would like to get that information into their hands and if there is support by other commissioners we can put it on the agenda for discussion in February, and possibly on the April agenda for a vote,” said McDaniel.

Commissioner Jeff Bowers suggested the data used for the previous vote probably needed to be updated before the matter was discussed again.

“It’s an issue that’s not going away. Hunters want it and every survey and questionnaire says hunters want it. They are the ones paying for the DNR. Whether we want to look at it this way or not, they are the customers,” said Burnette.

Commissioner Tom Dotson revisited another hot button topic in recent months and announced he believed they had found a compromise on a change to the catch and release restriction in the upper reaches of the Cranberry River. Commissioner B.K Chambers asked for the Director to look for a way to compromise on the matter after he said he’d been approached by many who wanted to have the restriction lifted to allow for the keeping of a few trout from the Cranberry for consumption while camping in the back country.

Previously a proposal to remove the catch and release restriction was put to a vote and passed, but after a firestorm of controversy it was determined the vote was not legal since the matter had not been on the agenda nor had it been put out for public comment.

Dotson reported he and McDaniel had visited with a number of user groups on all sides of the issue and believed they had found a solution.

“There’s an 18 mile stretch of river and everybody should have a seat at the table. Director McDaniel and I took a trip through the river and came to the conclusion you can’t please everybody, but I think we have a plan that would satisfy most,” said Dotson.

Assistant Chief for Fisheries Mark Scott was asked to address the biological implications of the change. He suggested while stocked trout wouldn’t necessarily be “dying in the stream,” the current location was the best biologically to hold trout year round.

“They looked at temperatures in the area and it’s in the best place now. If you move catch and release downstream you’re going to lose some of the carryover.” Scott said.

McDaniel acknowledged meeting with local outfitters and interest groups and agreed the area from Tumbling Rock Run to Cold Run was the best option for a compromise and asked for it be put on the DNR’s questionnaire for sportsmen next year.

“That’s what I asked for was a compromise…and that sounds like what we have,” said Commissioner Chambers.

“There are currently 22 states that stock birds for hunters to chase. Including in our area, Ohio, Pennsylvania, Kentucky, and now Maryland actually stock ring neck pheasants for hunters to hunt. What I would like to add to the March questionnaire—see what kind of interest there would be to establish three WMA’s where we could introduce ring neck pheasant for a winter hunting season,” McDaniel said.

He suggested the entire program and cost of the birds could be covered by application fees and stamps for the hunt. He compared the idea to the put and take trout stocking program.

“We put over a Million pounds of trout in streams—and that puts a lot of people on the creek fishing who wouldn’t otherwise be there. We’ve seen our fishing license numbers increase substantially in the last two years,” he added.

Bird hunting in West Virginia has been almost non existent for many years. Most of it is due to habitat issues and some of it due to disease and predation. McDaniel said they are working on those issues, but they aren’t easy fixes and time is passing quickly.

“We used to have a lot more habitat for birds like grouse. Creating habitat is hard and it’s expensive. What I fear is we are going to lose an entire generation of people who like to bird hunt,” he said.

The Division of Natural Resources often gets criticized for the complexity of its regulations. Those regulations are currently a nearly 50 page magazine. McDaniel said he wanted to examine ways to reduce those and see if some of the material can be condensed. He announced formation of a committee which included Commissioners Dave Milne and Jerod Harman along with a representative of DNR Law Enforcement and Wildlife sections and members of the sportsman’s organizations to go through the regs to see if those can be downsized.

McDaniel also wanted to add a question to the sportsman’s survey about the extra buck stamp. Previously the stamp could be used after buck season if it had not been filled as a rollover to muzzleloader or antlerless season. McDaniel wanted to pursue possibly reinstating the stamp’s rollover power or a modification for the unused stamp after buck season had ended.

Governor Jim Justice has reached out to Kentucky Governor Andy Beshear about setting up opportunities to obtain elk from Kentucky to bolster West Virginia’s elk herd.

“They’ve put together a group and we haven’t heard back from them,” McDaniel told the meeting.

On two previous occasions West Virginia obtained elk from the U.S. Forest Service herd at Land Between the Lakes near Cadiz, Kentucky. According to McDaniel the opportunity to get more elk from there has evaporated with the discovery of Chronic Wasting Disease eight miles away across the Tennessee border. McDaniel added national wildlife officials are discouraging the transport of live cervids for fear of disease spread. The situation leaves Kentucky’s eastern herd as the most viable option to obtain any new animals for West Virginia.

“Other than Kentucky or LBL, they’re really trying to prohibit the transport of cervids across state lines due to CWD. We’ll continue to try, but our best shot now is to work something out with Kentucky,” he explained.

Plans for an equipment building on the Tomblin WMA to support the elk project were way over budget. McDaniel said DNR personnel are giving the plans a second look to see where changes can be made to reduce the cost. The second phase of building on the Tomblin WMA is an elk viewing tower, which is currently in design and should be out to bid by the end of the year. He cited the increased cost for building materials as one of the chief obstacles on the projects.

Last week Governor Justice made a big splash about stocking a section of the Guyandotte River in Wyoming County. McDaniel said they receive many questions about expanding the stocking program and adding new waters, especially in southern West Virginia. While the Guyandotte River is one often suggested, there are obstacles.

He asked the wildlife section to prepare a recommendation for the February meeting. McDaniel noted the stocking would ONLY be rainbow trout due to endangered crayfish in several of the local waters.

For a second straight meeting, McDaniel tamped down rumors of the idea of opening up a limited rifle hunting season for deer in the four bow hunting counties of southern West Virginia.

“I live in Wyoming County I was totally against opening that lottery system for the does in the park. We are seeing less and less deer every year. There are now rumors they want to do a gun lottery buck kill—and we are totally against that,” said Jack Lambert of Saulsville during the public portion of Sunday’s meeting.

The first concern of such a program to enable hunting the trophy bucks of southern West Virginia with firearms came from another Wyoming County resident, Brad Toler, during the last Commission meeting. Toler on Sunday reiterated there would be no tolerance among locals for any kind of firearms season for deer in those counties.

“We don’t want a lottery gun season, a lottery doe season, and we don’t want extra does killed. You’re going to have a bunch of p-o’d hunters if you try a gun buck lottery in Wyoming County,” Toler said.

A similar idea pushed ironically by the NRA more than a decade ago stirred up considerable animosity among southern West Virginia hunters and the bow hunting community. Toler warned it would happen again if such an idea turned out to be a legitimate proposal.

McDaniel reassured Toler, Lambert, and everybody else on hand no such ideas were being considered.

“There is absolutely no truth to any rumor of gun hunting in the four archery only counties. Nobody in my organization is bringing it up or talking about it. We just had the 25th largest whitetail deer in North America killed there. We’d be foolish to change it,” McDaniel said.