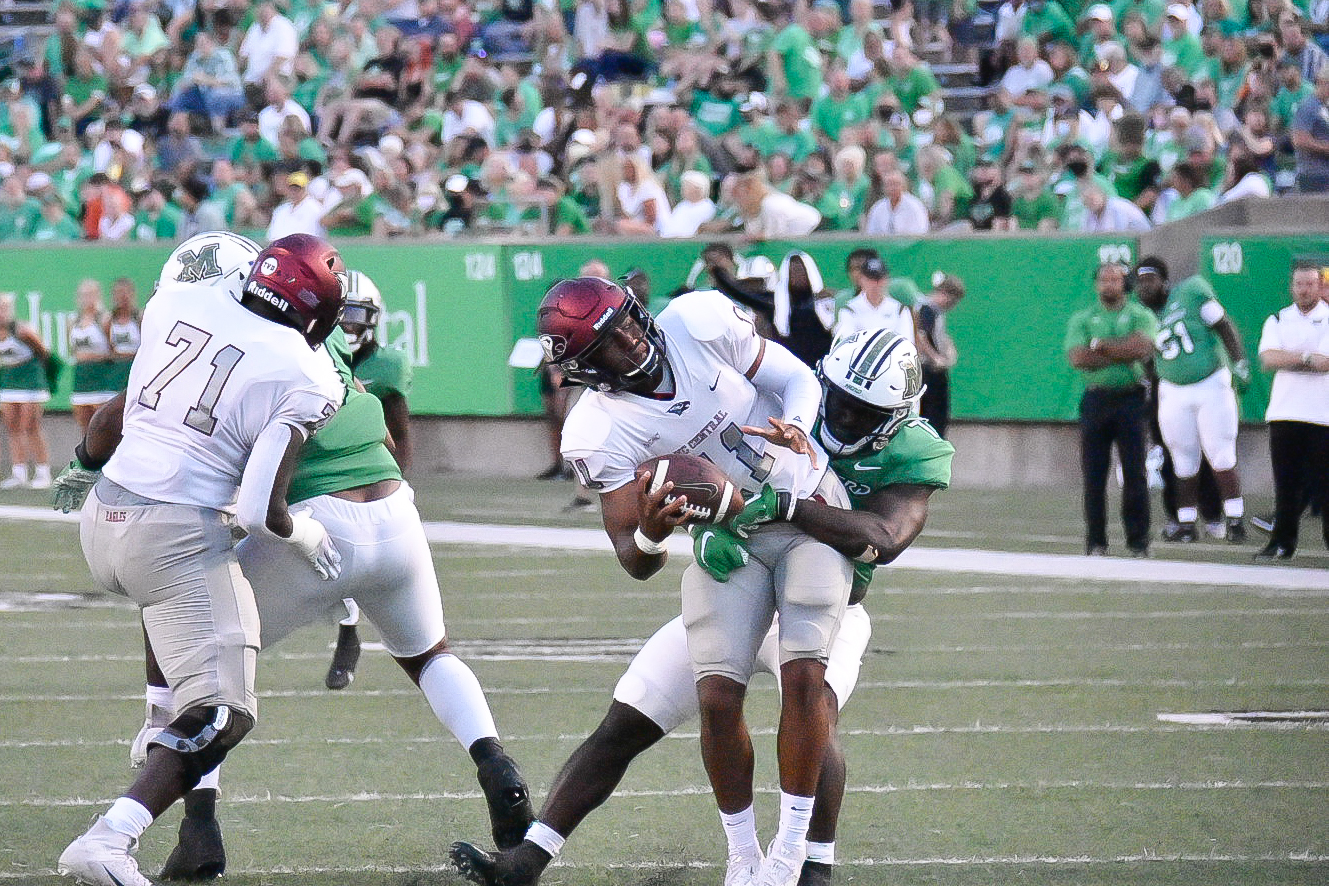 Marshall records a sack in its victory over North Carolina Central. Photo by Angie Shockley

HUNTINGTON, W.Va. — With Marshall and Florida Atlantic tied atop Conference USA’s East Division with Western Kentucky, league supremacy will be at stake when the Thundering Herd and Owls clash at 6 p.m. Saturday.

The contest at FAU Stadium in Boca Raton, Florida can be seen live on Facebook live.

Marshall topped FAU 20-9 last season, a game in which the Owls were limited to 234 total yards.

Willie Taggart is in his second season as head coach at Florida Atlantic, which beat UTEP at home last Saturday 28-25. Taggart has a 6-4 record at FAU and a 57-62 career record, which includes stops at Western Kentucky, South Florida and Florida State.

Battle in the backfield

The running back matchup in Saturday’s game should be entertaining, pitting the nation’s touchdown leader, Marshall’s Rasheen Ali, against FAU’s Johnny Ford, a South Florida transfer.

Ali has been productive all year, leading the nation in touchdowns scored at 17 (15 rushing, 2 receiving) along with the college football’s top average of 12.8 points per game. Ali has four 100-yard-plus games this season, including last week’s 133-yard performance in a 38-0 victory against Florida International.

Ford has only a single 100-yard game this year (against FIU), but he had 93 yards and a score last week and rushed for 92 yards and a TD on only eight attempts a week earlier in a win over Charlotte. For doesn’t have Ali’s numbers, but FAU Taggart thinks the sophomore from Miami is only getting better.

“He’s becoming more focused in practice and on his assignments and things he needs to do. He’s showing up on the football field,” Taggart said. “You get out there and put the ball in his hands and he’s making some plays. There’s some things he can get better at as well. I still don’t think he’s reached his peak yet. But I just like where his head is, his mindset in practice and with teammates and about getting better with the entire offense.”

QBs with plenty of tools in the tool shed

In baseball, we often hear of five tool players in reference to those who have have a wealth of skill required in many aspects to be a great player.

The same could be said about this week’s quarterback matchup between Marshall’s Grant Wells and FAU’s N’Kosi Perry.

Wells enters off his cleanest performance of the year in last week’s win when he completed 20-of-25 passes for 184 yards with no interceptions. He also ran for a score.

The freshman from Charleston has completed 67 percent of his passes for 2,507 yards, though he has thrown multiple interceptions in four games en route to being picked off 10 times to this point.

Perry’s best passing days came in a loss to Florida (261 yards) and wins over Georgia Southern (332 yards) and FIU (329 yards). HIs worst game was against UAB when he was intercepted three times.

Like Wells, Perry can make plays with his feet, and has 124 rushing yards and four touchdowns.

“We did a really good job offensively, our first game that we’ve played all year that we did not turn the ball over, and we had zero penalties on offense, which you guys have heard me preach about the importance of discipline, about the importance of taking care of the football and it’s starting to show,” Huff said. “Now we have to go back to the basics and do the things we did all week during practice to get those same results.”

No shortage of familiarity

The two coaching staffs have plenty of history.

Guidry coached safeties last season for the Owls, while Trickett was the offensive coordinator and quarterbacks coach.

Huff acknowledges that his staff’s knowledge of the Owls’ personnel and tendencies could help, but believes this one boils comes down to blocking, tackling, holding onto the ball and a solid kicking game.

Huff hopes to see his team make the most of its opportunity and notch a fourth straight win.

“This is the only time that this team will be assembled, regardless of who comes back or who moves on — everybody will be a year older and everybody will have more experience,” Huff said. “This team’s opportunities are getting more and more narrow, so we have to do everything we can to make sure we maximize it as a program, coaches, players, individuals all collectively together.”

Marshall is 16-4 against teams from Florida since 2013 … Marshall enters No. 8 in total offense (503.4 yards per game), No. 8 in passing offense (334.9 yards per game) and No. 21 in scoring offense (37 ppg). The Herd is 24th in scoring defense (19.8 ppg), sixth in sacks per game (3.5) and ninth in pass defense giving up 171.2 yards per contest. Marshall leads Conference USA in red zone defense and team passing efficiency defense …The shutout of FIU last week was Marshall’s first against an FBS opponent since November 17, 2018 against UTSA … Marshall’s defense has yet to allow a point in the third quarter this season. In its victory over the Herd, Middle Tennessee scored a defensive touchdown during the third quarter.