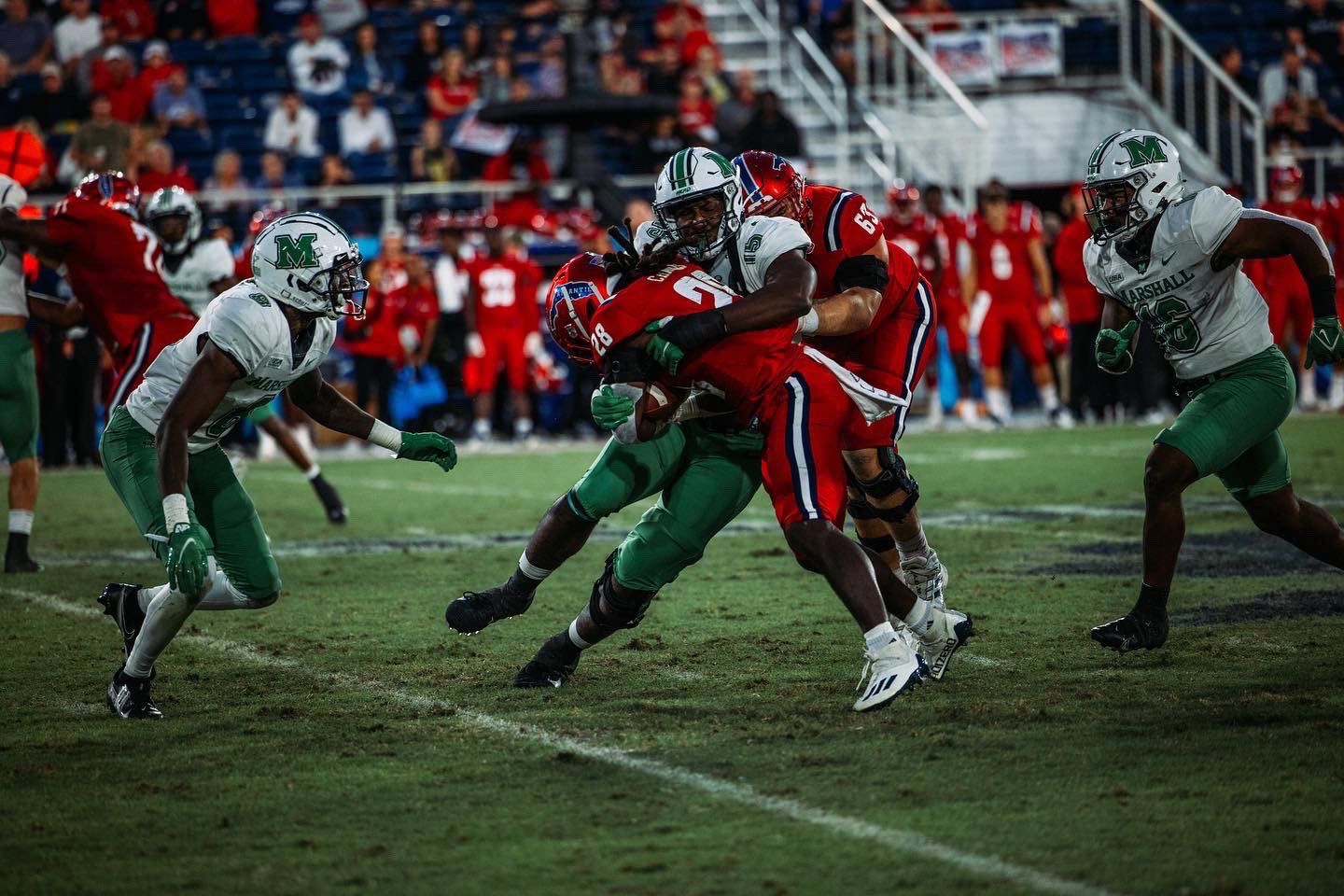 Marshall's defense put forth a strong showing in a 28-13 win at Florida Atlantic. Photo by Eric Espada/Courtesy of HerdZone.com

Jayden Harrison raced 99 yards with the opening kickoff for a touchdown to set the tone and trigger Marshall past Florida Atlantic, 28-13, in a key Conference USA East Division game Saturday night at Howard Schnellenberger Stadium in Boca Raton, Fla.

Freshman back Rasheen Ali added two rushing scores to bring his TD output to 19 total, 17 rushing. Quarterback Grant Wells hooked up with Willie Johnson for a 65-yard TD pass in the third quarter and the Herd defense maintained its dominance against the Owls from the second quarter on.

Marshall (6-3, 4-1 in C-USA) shares first place in the East with Western Kentucky. The Herd becomes bowl eligible as well. Marshall is now 9-2 in November games in the past four seasons.

Marshall returns home next Saturday to face UAB in a rematch of the 2020 C-USA title game won by the Blazers. Kickoff at Joan C. Edwards Stadium is 3:30 p.m. CBS Sports Network will air the game live. This is the annual Memorial Game remembering and honoring those 75 who died on Nov. 14, 1970 plane crash on return from game at East Carolina.

FAU drops to 5-4, 3-2 in C-USA. The Owls also had their 12-game home win streak snapped. Marshall had been the last team to win on their turf.

FAU’s best sequence came in the first period when it went 75 yards in five plays and then added two field goals for a 13-7 lead. Ali countered with a 2-yard TD run, then one from 21 yards with 36 seconds left before half for a 21-13 lead. He had a 75-yard scoring run called back due to an illegal block.

Marshall’s defense continued to rule in the second half as FAU did not score. The Owls managed two field goals and four punts on its closing first-half possessions and did not get closer than the Herd 20 after its TD march. The defense has not given up a point in the third period this season.

Wells wrapped up the scoring when he connected with Johnson for a memorable TD. This was Johnson’s final regular-season game in his home state of Florida. He led all receivers with 140 yards for a career-best.

On that play, Wells passed Isaiah Green for No. 12 on the program’s career passing yardage list, and Johnson moved into the Top 20 in career receptions. Wells finished 26-of-38 for 352 yards, his sixth game of 300-plus this season.