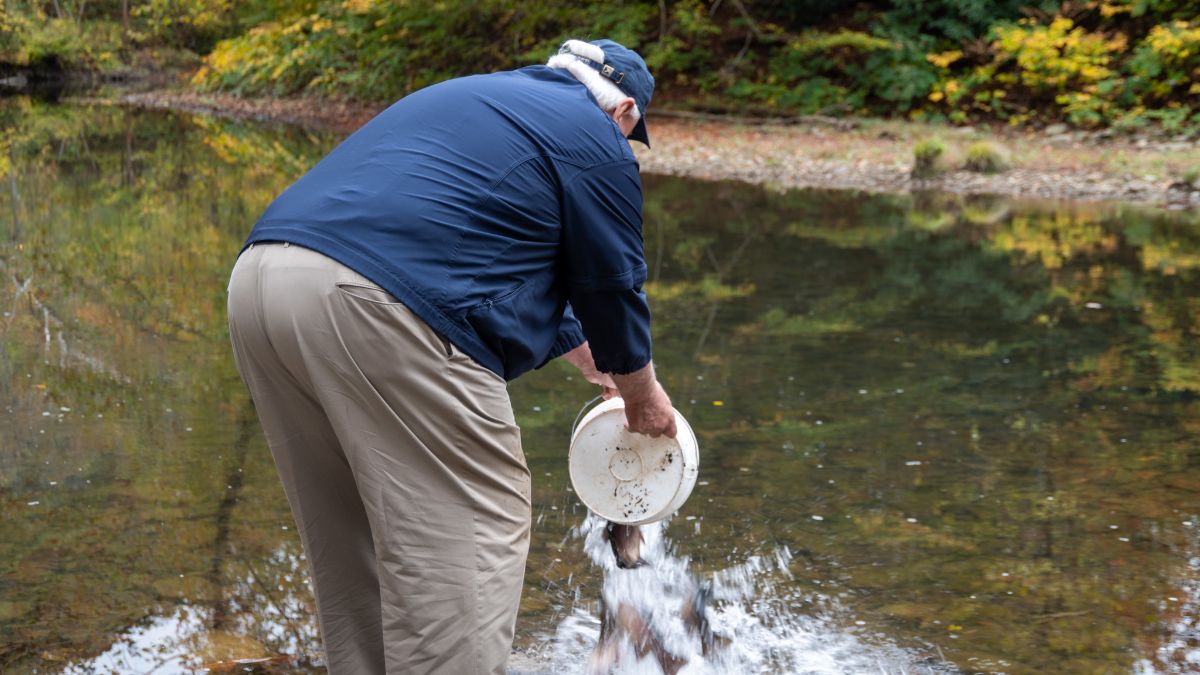 CHARLESTON, W.Va. — Governor Jim Justice’s decision to stock trout in the Guyandotte River may have seemed like it would be welcomed by southern West Virginia anglers. However, not everybody was thrilled about the Governor’s plan to use the Wyoming County waterway for put and take fishing.

Justice was on hand and dumped in the first bucket of fish in the upper reaches of the Guyandotte River and promised the waterway would become part of the regular stocking schedule.

“Look around. This beautiful river – the Guyandotte – the water is pristine. There couldn’t be a place any more beautiful than right here, right now,” Gov. Justice said. “By stocking this river on a regular basis, it will provide many, many more opportunities for our anglers to enjoy the great fishing we have in this great state and for the nature-lovers to enjoy all the beauty we have in this great state. It’s all going to bring more people into West Virginia.”

However, the news came as a surprise to many trout advocates who worried the stockings could threaten the lesser known wild trout fishery in the Guyandotte’s tributaries.

“When that information came out last week I was really surprised. I hadn’t heard any stirrings of it up until the release,” said Devin Bokey who was a member of the Trout Management Planning Committee and heads up a Facebook page called “Trout Fishing West Virginia.”

Bokey and other advocates of the wild trout fishery in the region question whether the plan to move ahead with stocking the upper Guyandotte was thoroughly researched.

“The cat’s out of the bag after all of this, but quite literally it was one of the best wild rainbow trout streams in the state. It’s a pretty important one because it proves to us mining restoration can yield trout. We can have a sustainable trout fishery in these locations,” he said.

But there are concerns stocked trout will dominate and push out the native rainbow in competition for the limited habitat the stream carries. Bokey said typically before streams are added, there is a more thorough study on the potential consequences before the plan is initiated.

“There’s no site specific research for this stream yet. Where that decision came so quick, there really wasn’t enough time to look at this situation and see,” he said.

There are separate concerns by the U.S. Fish and Wildlife Service since the upper reaches of the Guyandotte are home to several species of protected crayfish. DNR Director Steve McDaniel noted during the recent meeting of the Natural Resources Commission the fish stocked were all rainbow trout, which typically do not eat crayfish.

“There are studies out there from different waters and different watersheds that say rainbow trout will prey upon items like that, but yes they are much less likely than brown trout or brook trout. That does ease the concern a bit, but it would have been nice to have seen that research before hand,” Bokey said.

“Guyandotte River has been subject of many requests,” McDaniel explained during the Commission meeting. “What we’ve learned is one of the things we have is an excellent wild trout fishery. We as an agency need to work on this. There’s a point around the Mullens area where we may want to take action to protect wild trout fishery upstream.”

A press release from the Governor’s office indicated the Guyandotte would be added to the regular stocking list as part of the new Trout Management Plan which is being finalized and is expected to be presented to the Natural Resources Commission next year. Bokey was on the advisory committee which had input into what the plan should be. McDaniel hinted there might be modifications to the Guyandotte stocking idea.

“I know a lot of trout fishermen are angry about the stocking. I’ll be asking for a recommendation for the February meeting.” McDaniel added.

The stocked fish, which included 250 pounds of rainbow trout, were purchased from the Mountaineer Trout Farm.