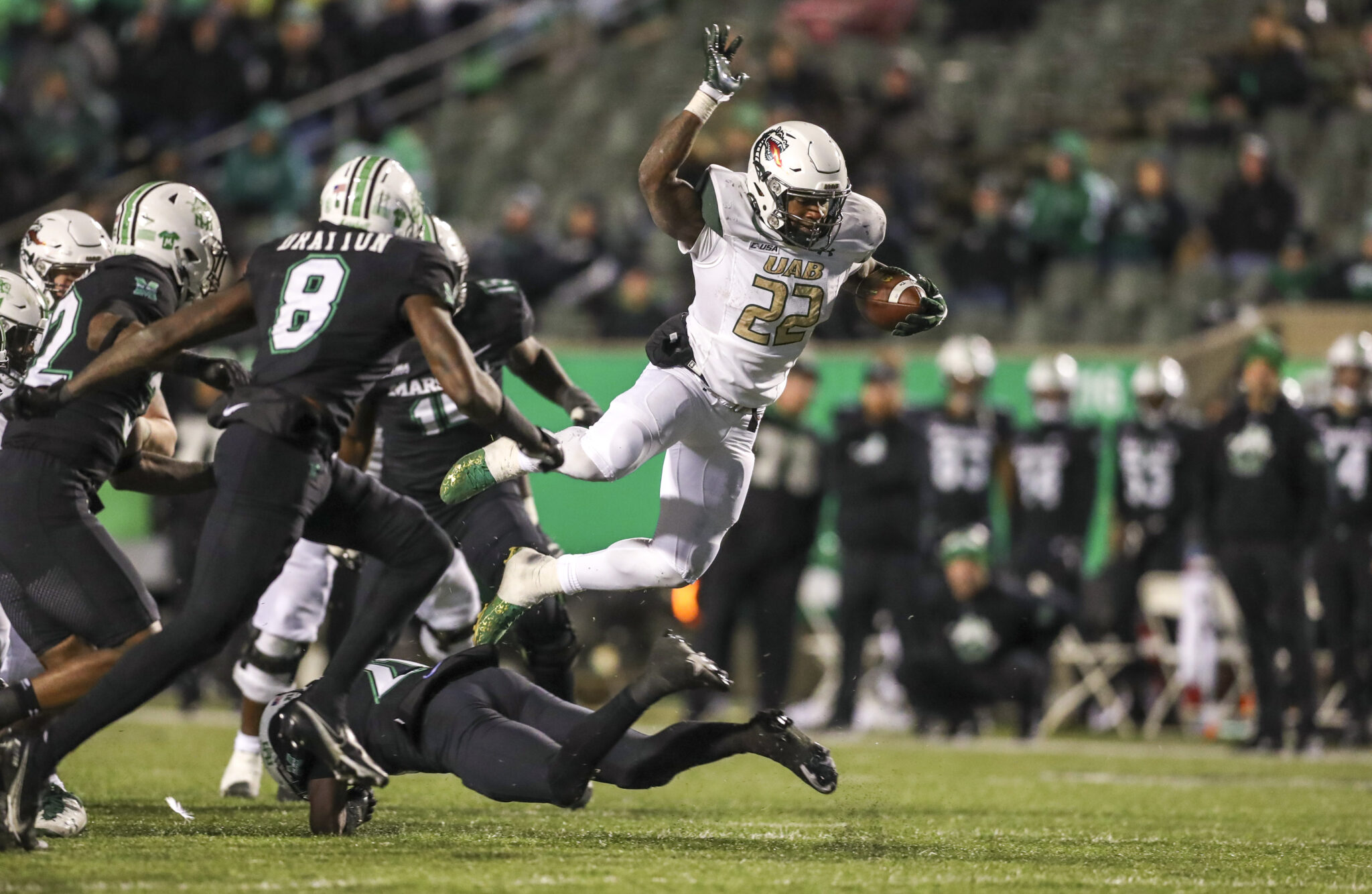 HUNTINGTON, W.Va. — UAB did it again.

First it was winning the Conference USA championship on Marshall’s home turf a season ago with a 22-13 decision.

Saturday, the Blazers did their part to stay in the C-USA West race and put the Thundering Herd in a hole in the league’s East.

“Our team did not execute,” Marshall first-year coach Charles Huff said. “That’s what happens in championship football games. Our goal (C-USA title) has not changed. We have to take a little different path.”

The Thundering Herd, which at one point trailed 14-0 on the windy, chilly afternoon only to rally to tie, suffered a rare home defeat in the Memorial Game, the game played closest to the anniversary of the Marshall plane crash on Nov. 14, 1970.

UAB drove 75 yards in six plays for the go-ahead score by Hopkins, who completed passes of 51 and 19 yards to Gerrit Prince to keep drives alive.

Marshall had one last chance, moving from its 18 to its 46 before Grayson Cash picked off a pass and the Blazers ran off the final 1:41.

UAB (7-3, 5-1 C-USA) stays a game behind UTSA with a visit to nationally-ranked and unbeaten UTSA next Saturday. The Blazers are seeking a third straight West crown.

In the first quarter, the Blazers scored twice for a 14-0 lead and outgained the Herd 162 yards to 43. DeWayne McBride went over from three yards out for the first score to cap a 5-play, 81-yard drive. Hopkins connected with Trea Shropshire for 64 yards for the big play. UAB drove 99 yards for a TD late in the period with McBride getting a 15-yard TD run. That drive took 11 plays and 6:13 off the clock and it was their longest scoring drive of the season.

Late in the quarter, Grant Wells hooked up with Jayden Harrison on a 36-yard TD pass with Harrison stretching out to make the catch and 1:05 left on the clock.

In the third period, Wells threw a second TD pass, this one 17 yards to Corey Gammage for the score with 4:18 on the clock. The home side had a fourth-and-2 at the UAB 28, went for it and the Blazers got called for a pass interference.

UAB responded with a 75-yard drive in six plays. The big one was a 51-yard strike to Prince.

UAB then went on a near 10-minute, lead-protecting drive to maintain the advantage. The Blazers started at their three, ran 16 plays, went 42 yards and took 9:59 off the clock before a punt. They converted three times on third down while Marshall had a 1-of-12 stat in third-down conversions.

UAB’s defense limited the nation’s No. 8 offense to 269 total yards. Wells went 22-for-39 for 232 yards. He came in with six 300-yard games this season. The Blazers kept freshman Rasheen Ali bottled up all day as he finished with just 41 yards on 16 attempts. He came in with a nation-leading 19 scores. Marshall had its lowest point output of the season.

McBride ran for 108 yards on 25 attempts and Hopkins connected on 13-of-18 for 250 yards. Prince and Shropshire each had 100 yards receiving, the first UAB duo to have 100 receiving yards in the same game since 2017. Shropshire has racked up 280 yards on seven catches in the last two games against Marshall.

“He did a good job,” Huff said of Hopkins. “He managed the game. He’s a tough kid. On championship level teams, that’s what you get.”

Herd players wore all black uniforms and the helmets had a special decal to honor the 75 people who perished in the plane crash. The 51st Memorial Service is Sunday at 2 p.m. at the Memorial Student Center plaza. Featured speaker is Mark Miller, a freshman on the 1970 Marshall team and member of the Young Thundering Herd in 1971.

This likely was UAB’s final trip to Huntington. UAB has accepted a bid to move to the American Athletic Conference in 2023 and the Herd is headed to the Sun Belt Conference that year.