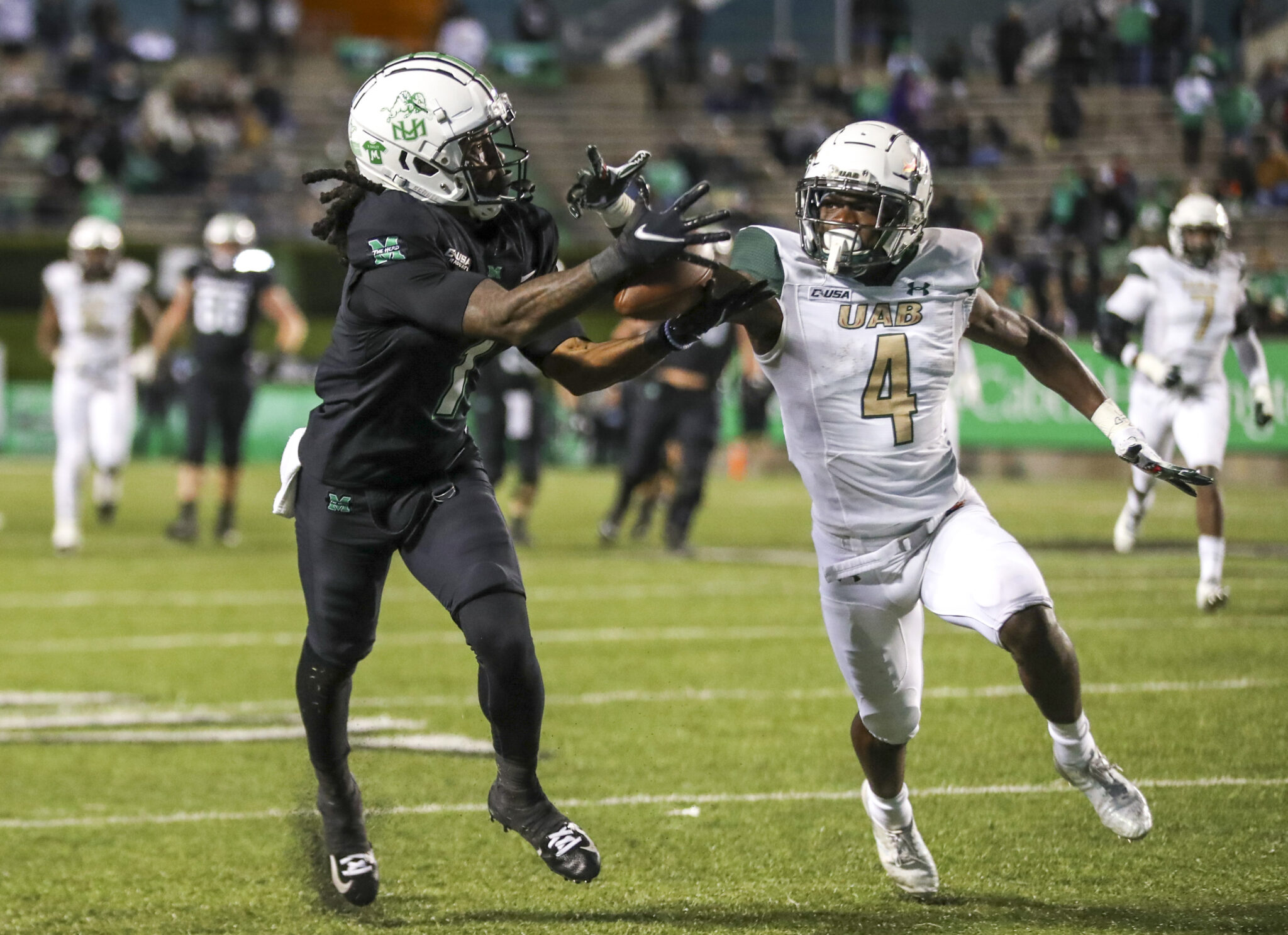 HUNTINGTON, W.Va. — A Conference USA championship still is available to Marshall and first-year coach Charles Huff stressed that to his team Saturday night.

Defending Conference USA champion marched 75 yards in six plays and scored on a 1-yard run by quarterback Dylan Hopkins with 36 seconds left in the third period to take the lead for good at 21-14. On their final drive, the Blazers ran 10:03 off the clock, converting on third down four times before they had to punt.

On its final possession, Marshall went from its 18 to 46, then quarterback Grant Wells had a pass picked off by Grayson Cash. UAB ran out the clock to finalize the win, 21-14, in front of an announced crowd of 19,329 fans.

This was the Memorial Game, one played closest to the Marshall plane crash on November 14, 1970. Players wore all black uniforms and helmets with a special decal to honor the 75 who died.

UAB (7-3, 5-1) thus stays a game behind nationally-ranked and unbeaten UTSA in the West with a trip to UTSA next week.

Marshall (6-4, 4-2) finds itself a game behind Western Kentucky in the East with two games left. Western Kentucky visits Huntington on November 27. The Hilltoppers are home this Saturday against Florida Atlantic. The Herd goes to Charlotte this week.

“The course has changed, the goal has not,” Huff said. “It’s a little bit different path. We go back to work, learn from this one. We’re still on the road. We have to perform a new course. If we were able to write the story it would be totally different, but it’s not that way.”

That third-down conversion rates for both teams didn’t set well with Huff. Marshall went 1-for-12 on third downs to 9-of-17 for the visitors, who controlled the ball for 37:43 to 22:17 for the Herd.

“It’s going to be hard to win football games if you can’t convert on third down,” Huff said. “They get to third down and we’re not able to get them off the field. That’s what happens in championship type football games.

“You’ve got to be able to execute. Whether it’s first down, whether you make a big catch, convert third down, get a stop on third down, flip the field on special teams. We learned lessons from the three losses earlier in the year about detail and discipline. Now it’s consistency and execution.”

Marshall came in ranked No. 8 nationally in total offense. UAB limited the Herd to 269 total yards (228 below average) and 14 points (22 under average). Wells, with six 300-yard plus games, had just 232 and the late pick. Freshman standout Rasheen Ali, who has 19 total touchdowns, mustered just 41 on 16 carries. The 14 points is Marshall’s lowest output this season.

“Great start, but then they (Marshall) answer the bell, so to speak,” UAB coach Bill Clark said. “We’re tied, we’re backed up and then come back and have a great play to Prince, who makes a great run and we finish with a touchdown. And then that last drive, time after time we ate the clock, made first downs, and just a great job by the offense there.”

UAB, the second-most penalized team in C-USA, got all its flags in the second half (six for 65).

“We played clean,” Clark told Evan Dudley of al.com. “Had a questionable pass interference on a fourth down and a holding or two, but it was a clean game. They let us play, they let it play like a championship game until a few there at the end. I was really pleased and thought we kept our composure all game.”

All Hopkins wanted to talk about was the final two drives.

“Those last two drives were everything,” Hopkins said. “We knew it before this week started that it would come down to the end. Ryan Davis makes huge plays, you trust him at any moment and he came up with some today. I’m super happy about those last two drives and I think it’s a good team win.”

Cash’s interception was his fourth game-changing play this season. He already had two blocked punts and a 100-yard interception return for a score. On Saturday’s pick, he watched the receivers and moved in to make the catch on a ball over the middle.

“They ran that play a couple of times earlier in the game,” Cash said. “I saw the receiver was coming at me, Poppie (Dy’Jonn Turner) had a great reroute on him and the quarterback just threw to me and I was there.

“Offense kept the ball, driving down the field the drive before, and took a lot of time off (the clock). We knew it was up to us on defense and someone had to make a play, I was in position to make it and definitely gave the team a big win tonight.”

The pick gives UAB a 2-0 record against East Division members this season.

Huff took his team to Spring Hill Cemetery on Friday night before the bus trip to the hotel. Saturday, he made an early-dawn visit to the site of the plane crash which happened on a hillside short of the runway at Tri-State Airport in Ceredo.

As a rookie coach, he made his first speech at the memorial anniversary service held Sunday at the Memorial Student Center Plaza where rain did come down at times. Mark Miller, a freshman on the 1970 team and member of the 1971 Young Thundering Herd, was the featured speaker. He played linebacker.

Senior offensive lineman Will Ulmer made his 54th career start, passing Chris Jasperse for No. 3 on the career list … The Herd defense allowed an opposing offense to score points in the third quarter for the first time this season. Wells had two TD passes, moving past Isaiah Green for No. 14 on the career passing touchdowns list. He’s tied with Bradley Workman and Bernard Morris for No. 13 on the all-time list with 31. He did go over 5,000 yards passing for his career, the 12th QB in Herd history to do so. He’s over 3,000 yards this season, the 18th time a Herd QB has achieved that feat … Linebacker Abraham Beauplan led the Herd in tackles with 15, a personal best as well … Kicker Shane Cuicci has made 64 straight PATs. As a team, the Herd’s converted 103 in a row … Defensive lineman Owen Porter racked up a career-best eight tackles … Corey Gammage tied a career high with eight catches.