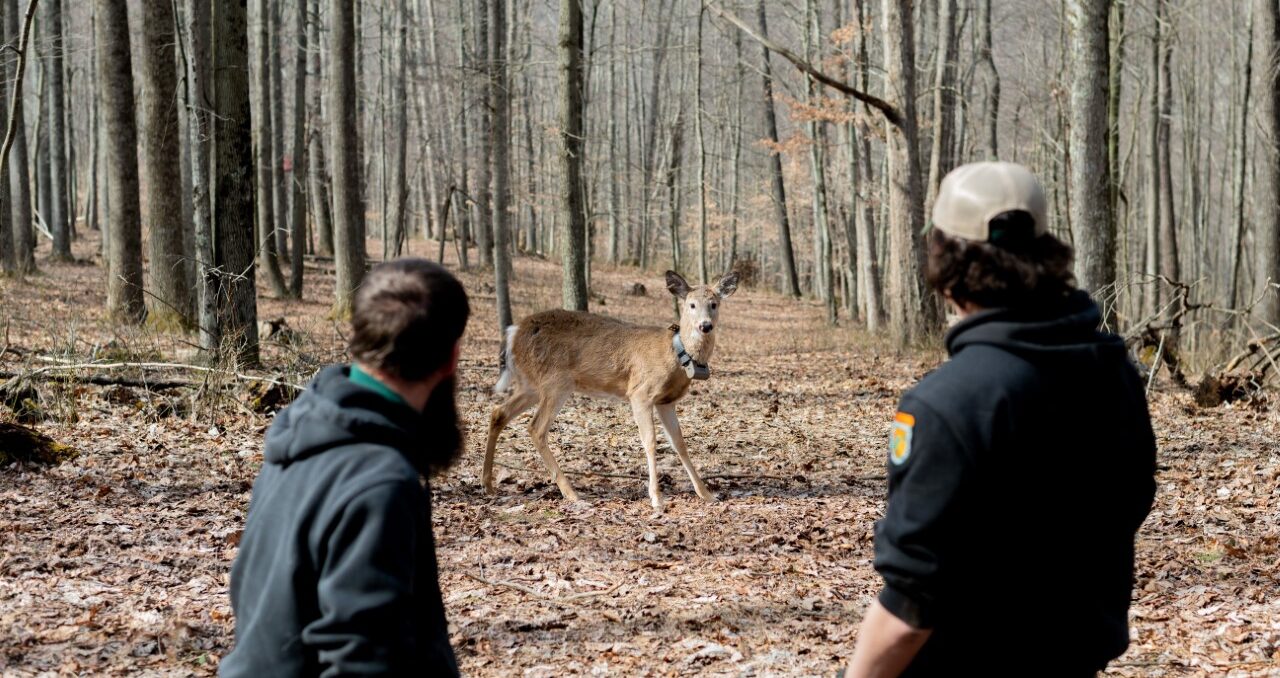 DNR personnel turn loose a deer captured and fitted with a tracking collar last winter to be part of an ongoing study PHOTO: WVDNR

ELKINS, W.Va. — As hunters head into the woods for the 2021 buck season, don’t be alarmed if you happen to spot a deer wearing a collar.

“All the collared deer are legal as long as you are hunting legally. We don’t want anyone to look at a collared deer and think twice. Don’t let the collar influence your decision. If you want to harvest that deer, go ahead,” said Brett Skelly, Assistant Deer Project Leader for the West Virginia Division of Natural Resources.

Skelly is engaged in the first year of a three year study to try and answer some common questions about whitetail deer in West Virginia. Skelly and his team hope to  determine the range of movements on deer, especially movements at different times of the year like during the rut.  He’s also analyzing the difference in movement between bucks and does. After less than a year, the study has already picked up some interesting date from the GPS tracking collars.

“Definitely one of the big things has been yearling buck movement, especially around this time of year. We had several of those bucks move five or six miles from where they collared them and set up a whole new home range. We had one buck that moved 15 miles and since the presentation at the Natural Resources Commission meeting he’s moved another three miles,” Skelly said.

The deer were tagged and fitted with the GPS collars during the months of January through March in three different areas of the state. Hampshire and Hardy County, Barbour and Upshur County, and Mason and Jackson Counties are the sites for the study.  The goal is to eventually have 120 deer collared in all three study areas. One other unique aspect is all of the deer captured in the study are on private land.

“The next step is to get through hunting season and see how many deer we have left. Then in January, February, and March we’ll capture and collar several more deer,” he explained.

Another key question the study aims to answer revolves around how deer die. Cause specific mortality is hard to know, but Skelly hoped they would be able to have a better handle on it by the time the study is done. Since a lot of deer die at the hands of hunters, it was another reason he hoped hunters would ignore the collar and if they planned to kill a deer to go ahead and kill it.

So far, there have been two deer killed by hunters wearing a collar. Skelly noted the mortality he’s recorded so far during his presentation to Commissioners.

“There was one road kill and I’ve had two hunter kills even before we get into gun season. We’ve had two that were clinical chronic wasting disease. A few predations and a few we couldn’t quite figure out what happened to them,” he explained.

The study will hopefully give biologist additional information to shape management plans for future years in various parts of West Virginia.

Anyone who kills a deer wearing a collar is asked to contact Skelly through the contact information on the collar.  Each of the deer selected for the study has a metal band in each ear which also contains contact information.  The agency wants the collar back to be used again and would like to get one last look at the deer to compare its condition now to the condition when it was originally captured.