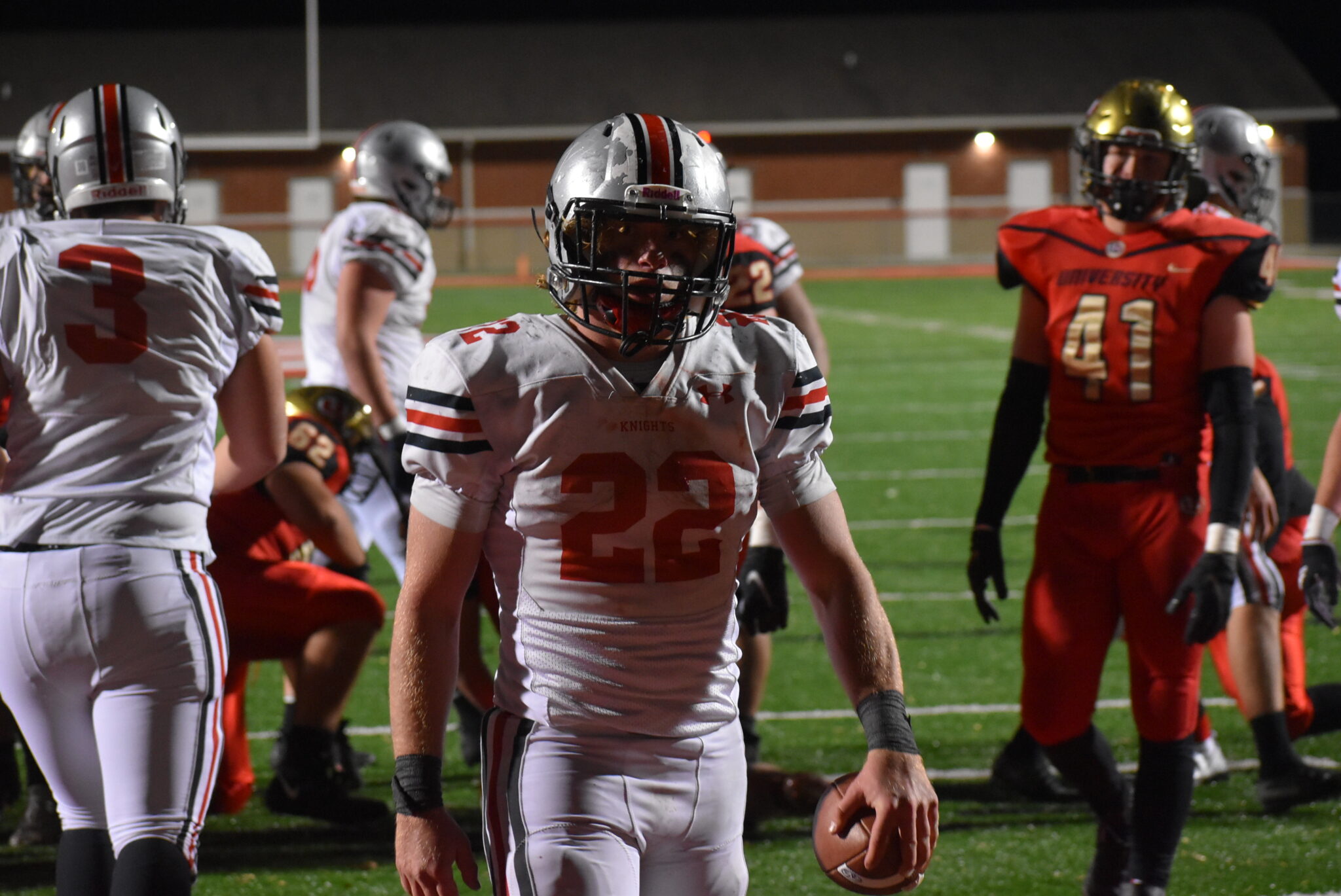 MORGANTOWN, W.Va — The Cabell Midland Knights made the most of a trip Mylan Pharmaceuticals Stadium, and defeated the University Hawks, 46-21 in Friday’s Class AAA quarterfinal.

The Knights were led by a superb running game and seniors Chandler Schmidt and Jackson Fetty. The two combined for 437 rushing yards, which accounted for 78 percent of the Knights’ total rushing yards. The two found the end zone seven times combined.

“They are unselfish and great kids,” said 11th-year Knights’ head coach Luke Sammons. “Sometimes one or both of them have great games. You cannot key in on one guy.”

Cabell Midland’s offensive line opened holes that allowed the Knights to get anything they wanted on the ground. CMHS finished the game with 562 total rushing yards for an average of 9 yards per run.

Midland, the No. 5 seed, had a tough battle on the other side of the ball. University running back Colin McBee was held in check and rushed for 93 yards. No schematic changes were made by the Knights, according to Sammons. All Midland did was play its brand of football.

“We executed,” Sammons stated. “We did not do a whole lot different. The defensive line did their job in squeezing. They knew the assignments. We did not bring much pressure. We played assignment football and tackled well.”

The fourth-seeded Hawks did get back junior quarterback Chase Edwards after suffering a concussion in the regular-season finale.

Sammons was proud of how his defense executed against University’s high-powered offense.

Cabell Midland held possession of the football the majority of the game, which did not allow the Hawks to gain momentum offensively. The importance of ball possession is frustrating but beneficial if you’re on the other sideline.

“It is frustrating when you are on the other sideline,” Sammons said. “We have been in that situation before against other teams from other states. It is tough and different. It is different to have momentum. It is a neat thing to see when you are on the right side. We don’t think about it. We expect to score when we have the ball.”

“It is great,” Sammons noted. “Any time you can win in the playoffs it is the most important thing. Travel is hard. Any time you go on the road and win is great for the program and kids. These kids are hungry for more. We are excited about next week.”

Cabell Midland will take on the Huntington Highlanders next weekend. The Knights will look to avenge their lone loss this season back on September 10th.

“It is the semifinals, and whenever you get to that point they are a good team and so are we,” Sammons stated. “It is one game closer to play for a championship. Our kids are excited. It is always good to play somebody that beat you. Our kids will be hungry.”