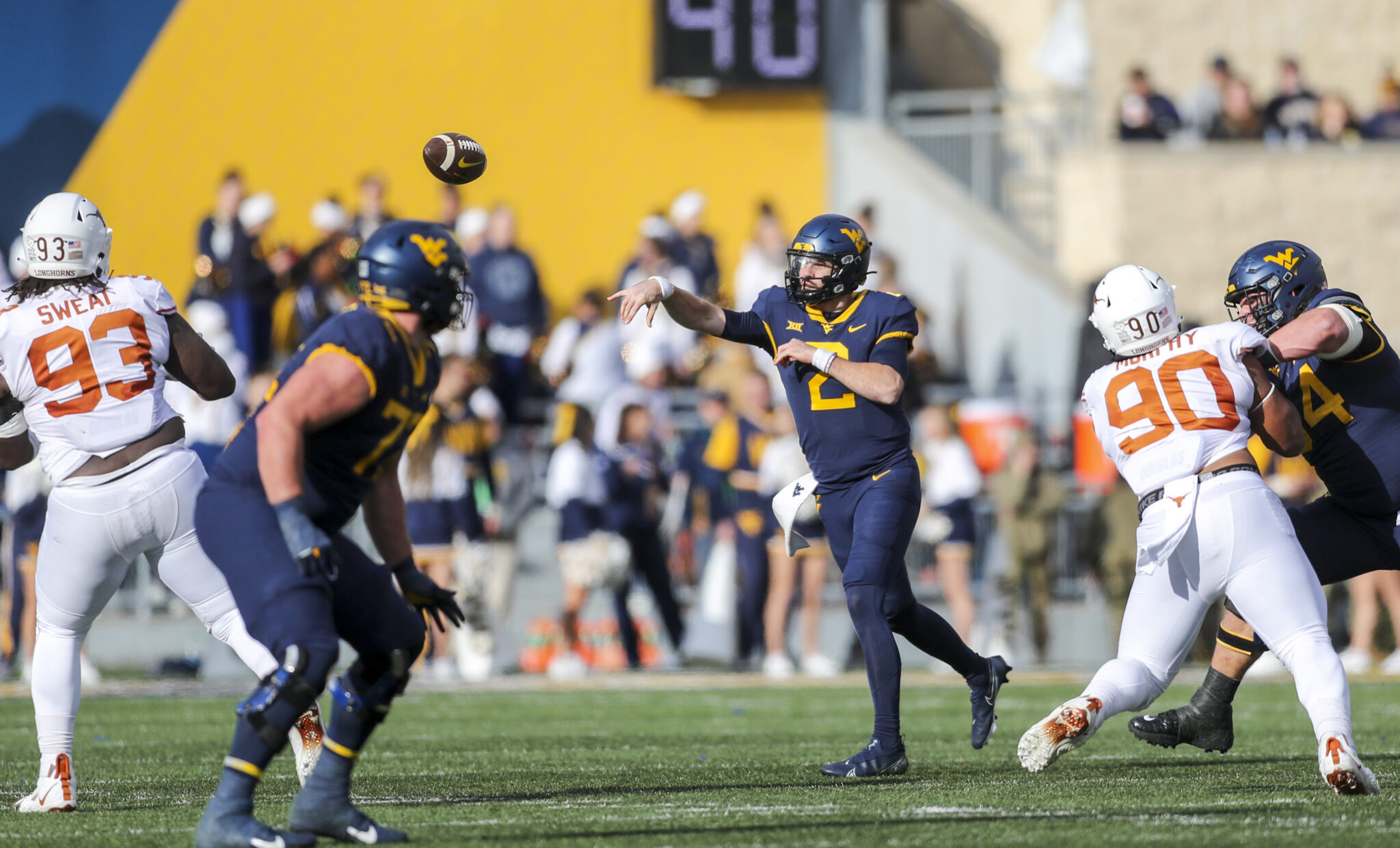 MORGANTOWN, W.Va. — West Virginia’s offensive line has been a frequent topic of discussion throughout the 2021 season.

The offensive line has gone through ebbs and flows from hiccups against Oklahoma to not allowing a sack in its performance versus Iowa State.

“We believe that they continue to take steps,” Parker said. “Even though we have taken a few steps backward, we have also taken steps forward. That does not mean it is failing. It is part of the process of playing with a younger group.

“I know there has been a lot of clips floating across social media about how they strain to finish, and that is a byproduct of continued collected effort.”

The killer instinct of true freshman right tackle Wyatt Milum (64) was on full display here on this crucial 3rd and long in the second half yesterday against Texas … pic.twitter.com/90IfmpPoRi

Milum has seen action in 10 of the 11 games over his first season in Morgantown, missing only the loss at Baylor with a midseason injury.

After beginning the season splitting time with Parker Moorer, Milum has made six starts and continued to come into his own as a true freshman.

By popular demand … You folks asked for it, so here it is. Watch RT Wyatt Milum (64) pile drive Texas corner Jahdae Barron (23) a full 15 yards downfield on this deflected tunnel screen. This happened right in front of our sideline and ignited the entire Mountaineer bench … pic.twitter.com/fTCmrLL1kc

Parker has been impressed with the amount of growth Milum has shown in year one.

“He is at a point now in his career where, at a young age, he has played a lot of meaningful football in meaningful games,” Parker noted. “What better to stand in that fire at his age and be able to progress the way he has?”

Parker attributes the failures Milum went through this season to help him in the growth process as he develops into the player the WVU coaching staff thought it was getting when it added one of the state’s top recruits over the last decade.

“Failure is good,” Parker said. “He has had to fail some and play young, but he has failed just enough and found success. He is at a point now where the game has slowed down for him. He is starting to play fast and physically. Everyone around him has noticed those things.”

The offensive line will have another tall task this weekend as Kansas boasts two of the Big 12’s best defensive players.

Safety Kenny Logan Jr. is tied with Mountaineer linebacker Josh Chandler-Semedo atop the Big 12 with 96 tackles and defensive end Kyron Johnson is tied for fifth with 6.5 sacks.

Johnson is a player Parker will be keeping an eye on throughout the game because of how well and often he causes disruption in the backfield.

“He is a matchup issue for us in the pass rush,” Parker said. “We have to know where he is and have a good plan for him because he can disrupt the game. We have to do everything in our power and make sure schematically and personnel we do not let him do that to us.”

Parker also respects how well Logan has played this season, and knows WVU’s offense must be aware of where he is at all times.

“He is a good player, and he shows up in different ways,” Parker noted. “He tracks the ball well. He works downhill in the box, and he tackles the football well. He plays with high energy. He is a complete player.”