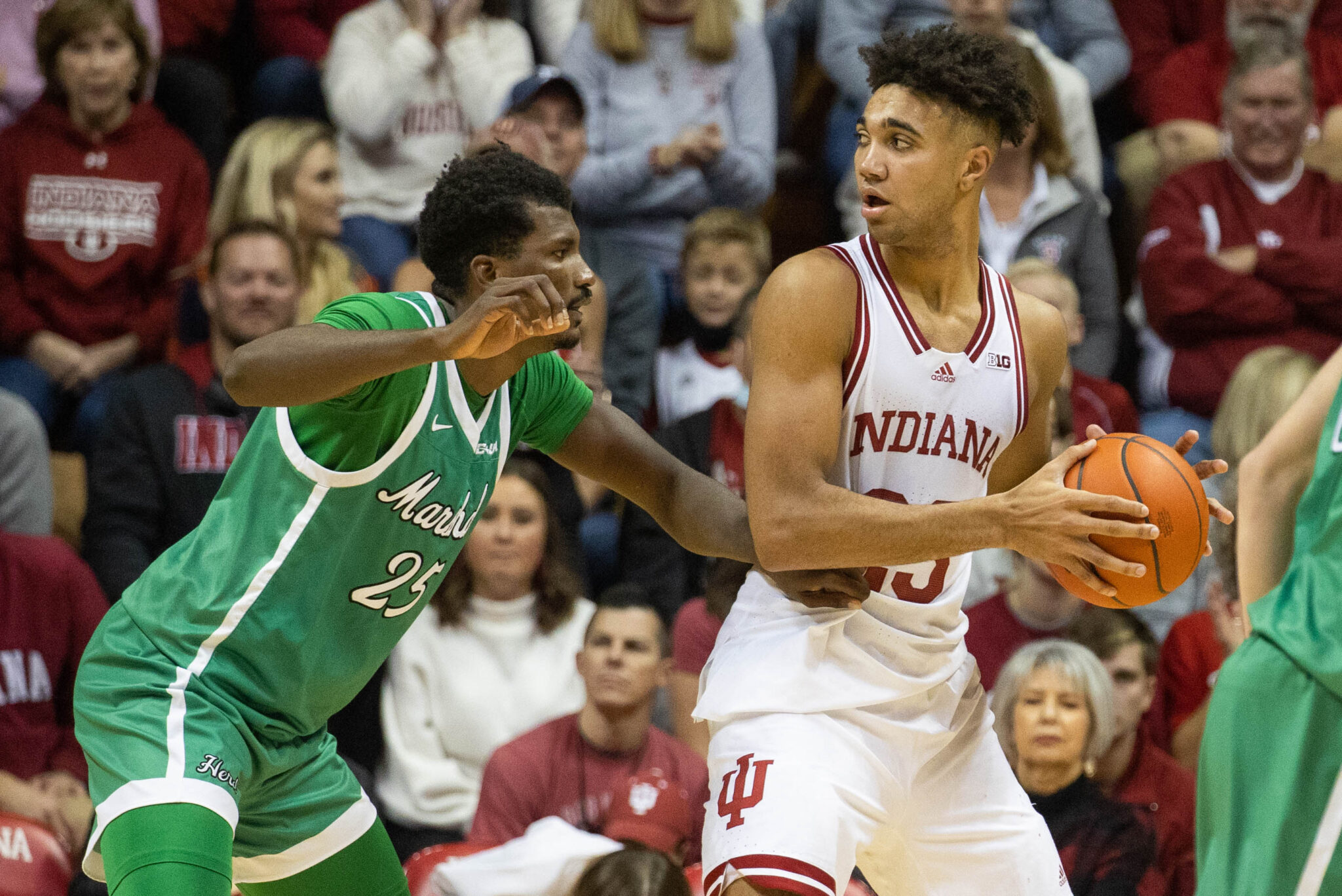 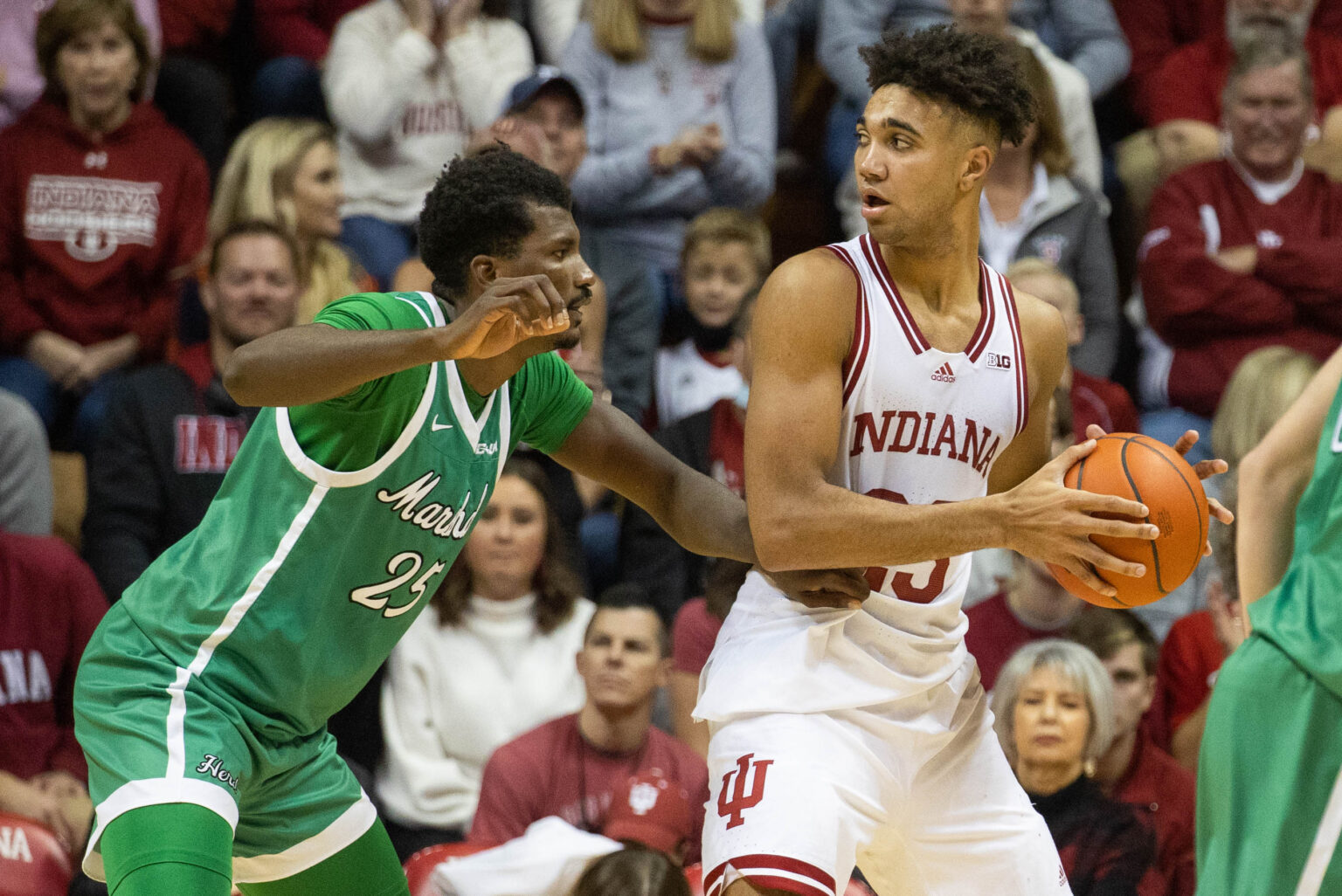 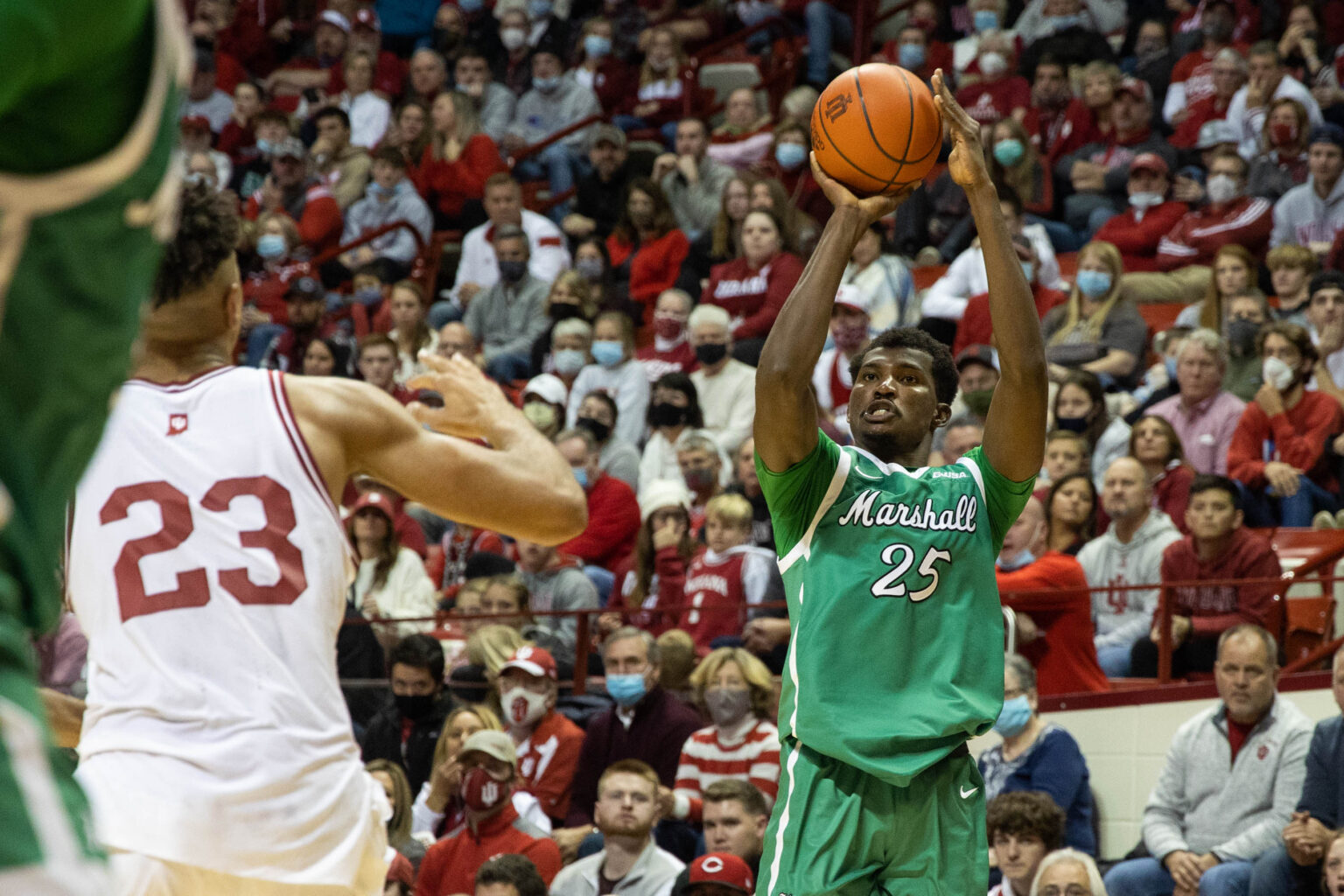 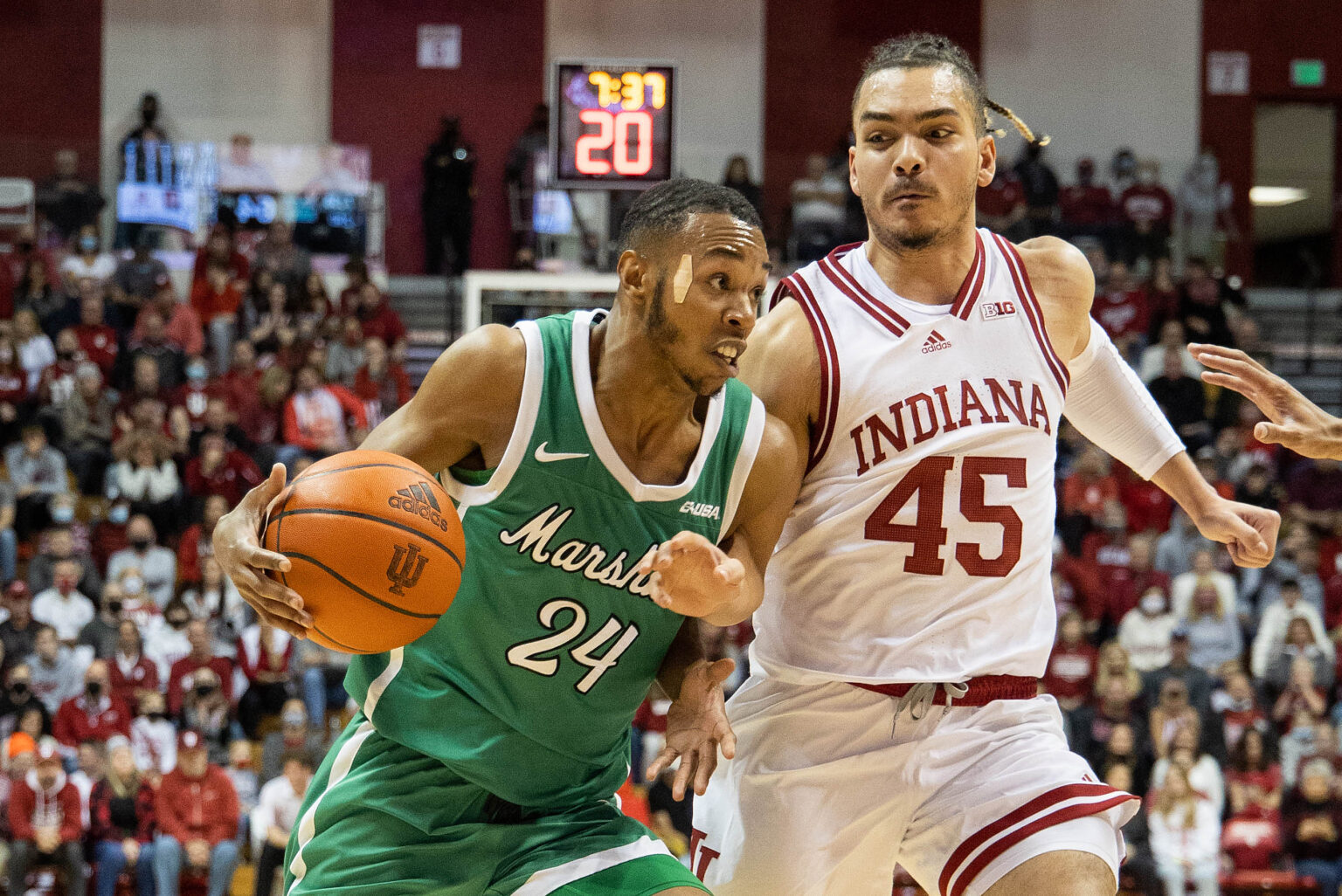 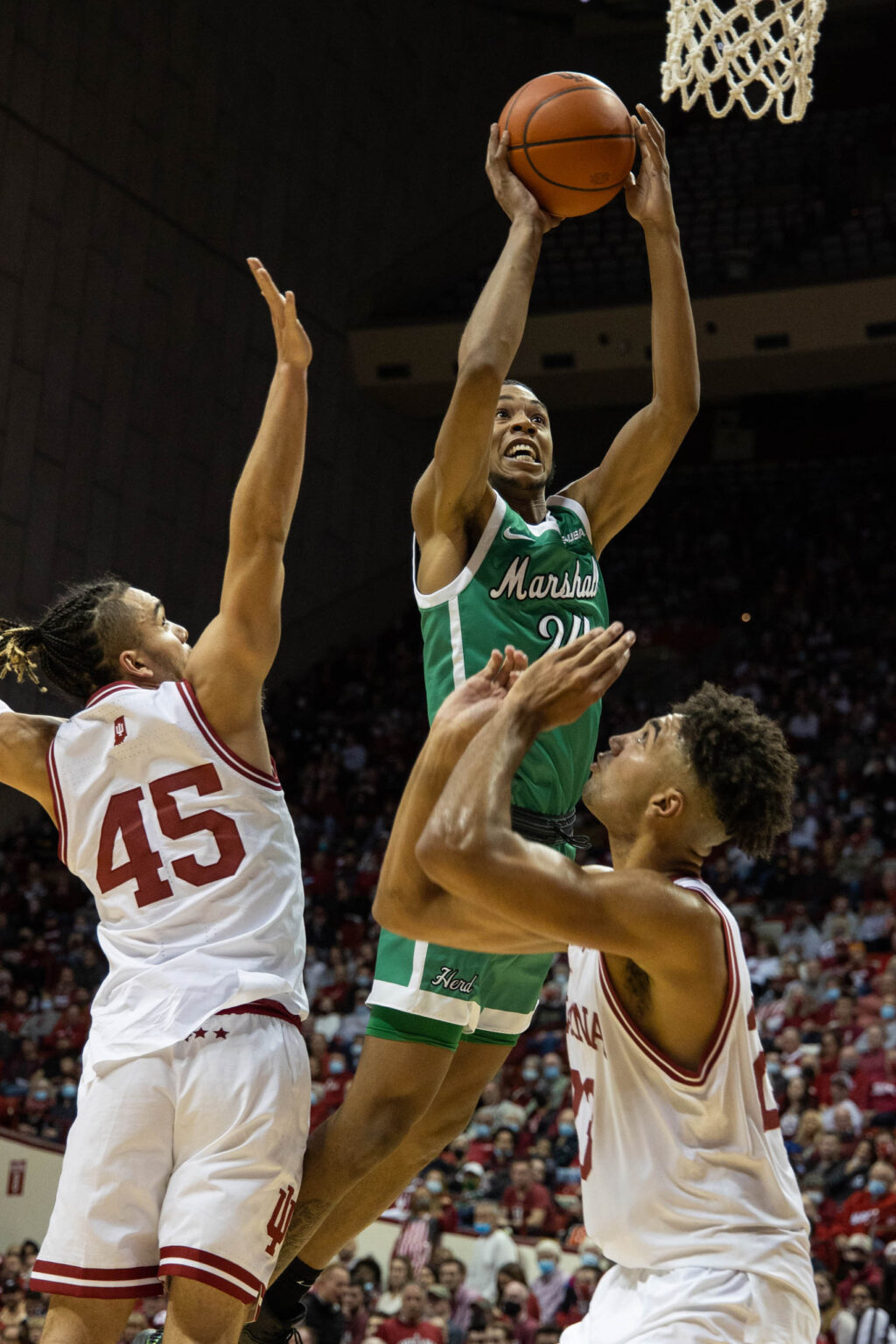 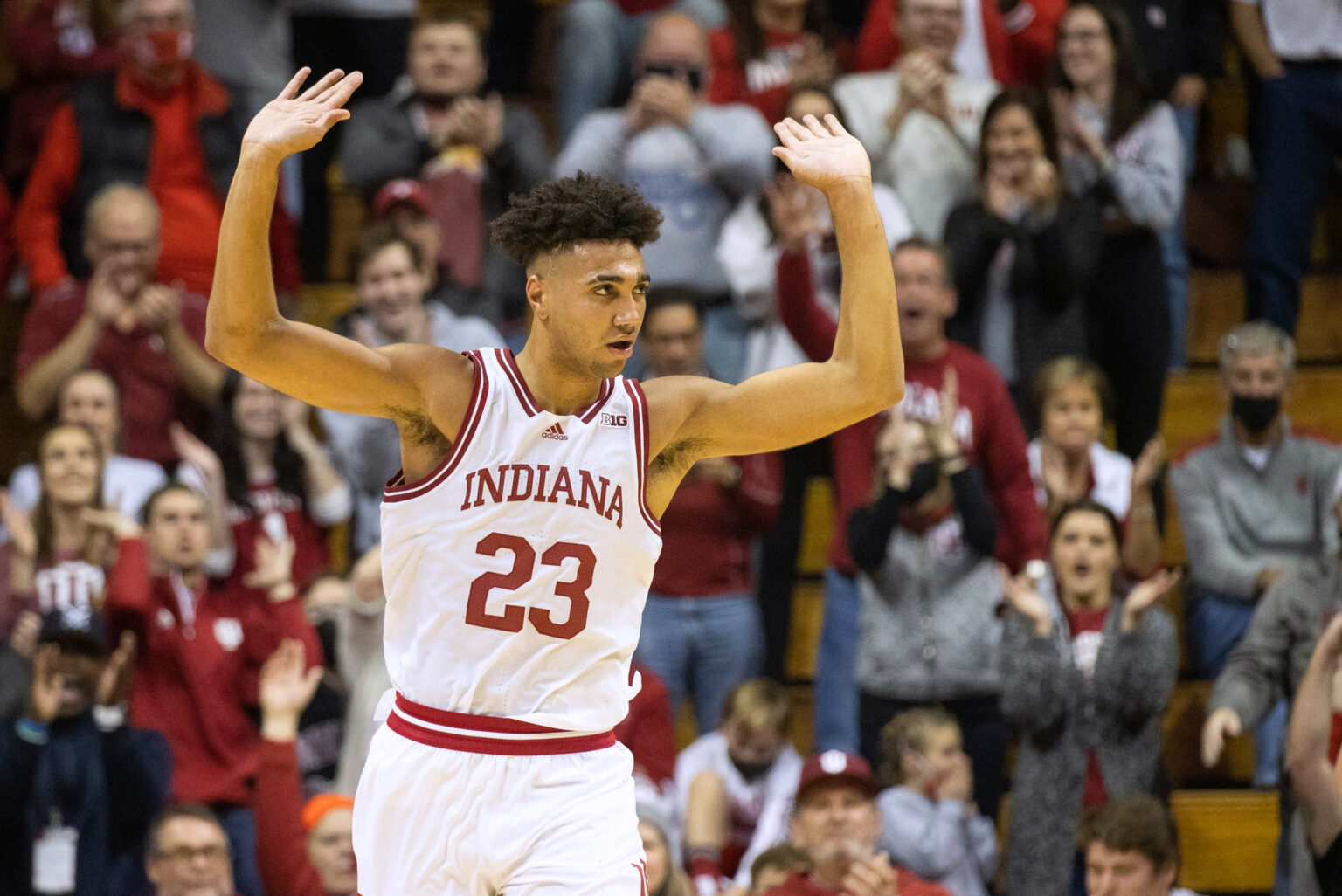 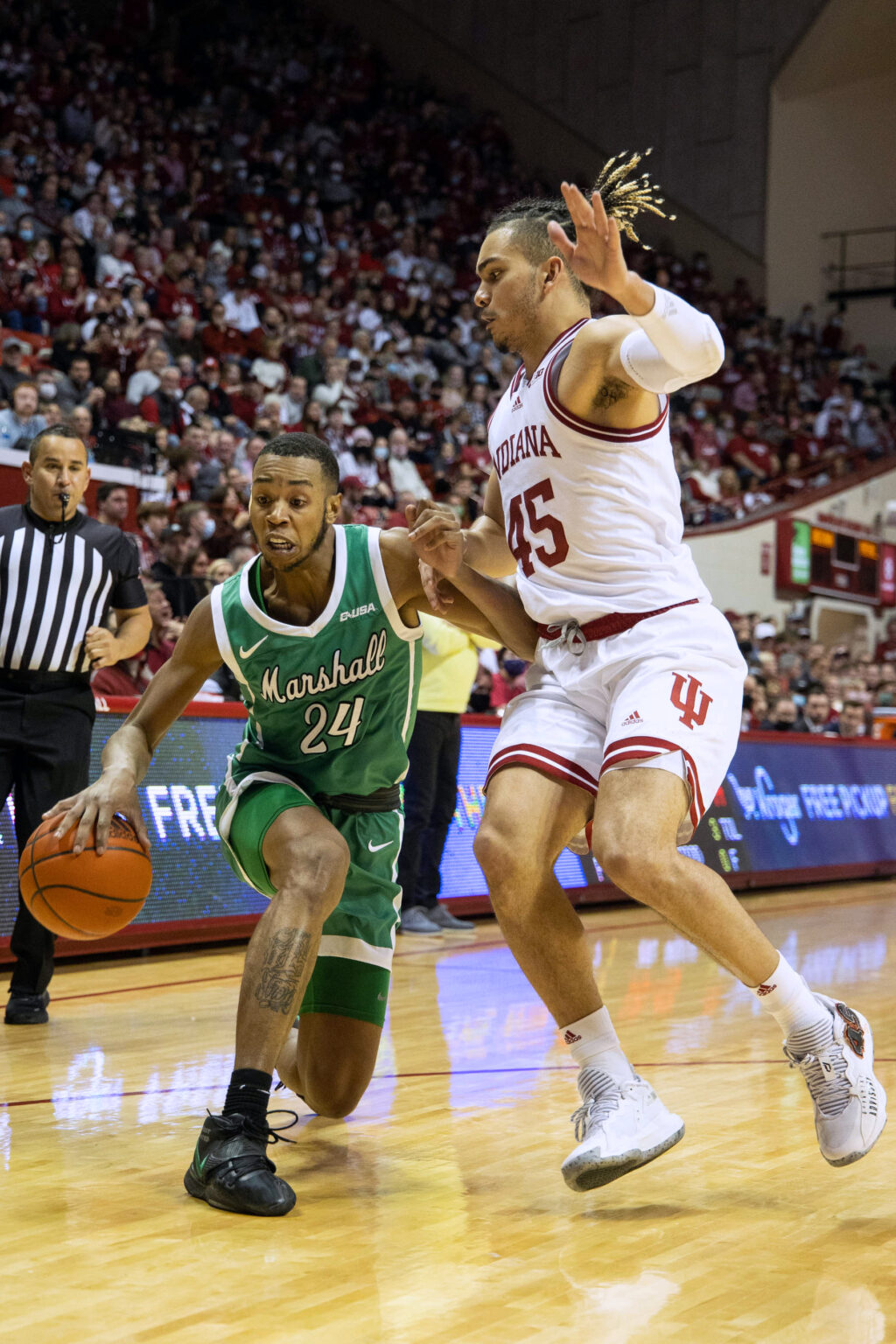 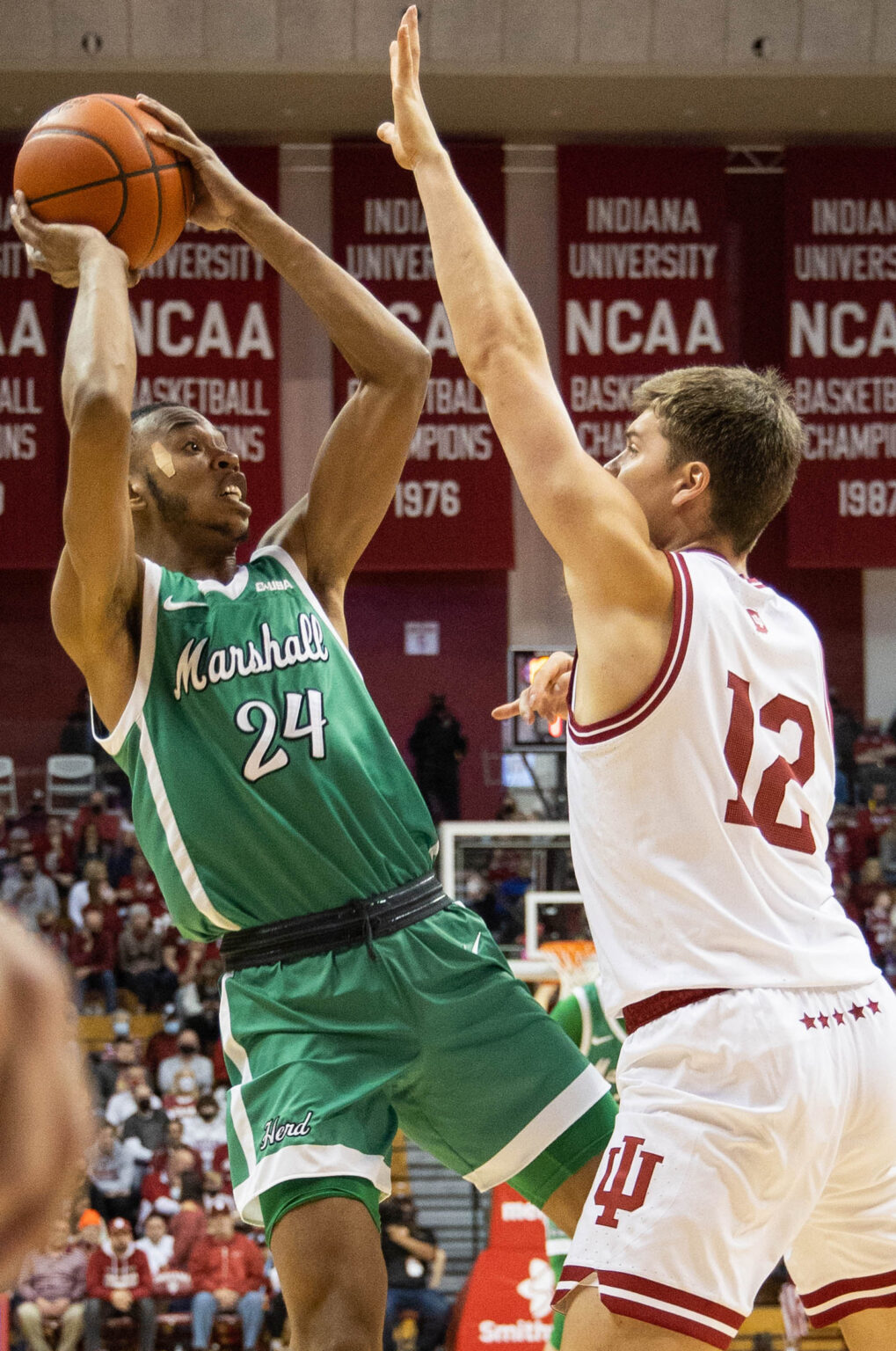 Trayce Jackson-Davis and Xavier Johnson came up with career nights to power Indiana past Marshall, 90-79, Saturday night in front of 12,330 fans inside Simon Akjodt Assembly Hall in Bloomington, Ind.

Jackson-Davis, a 6-foot-9 forward, finished with 43 points along with five rebounds and five blocks. The scoring outburst mark the most by an Indiana player since current head coach Mike Woodson hit for 48 against Illinois on March 3, 1979.
The game marked the third-career 30-point game and first-career 40-point game for Jackson-Davis. He came in with a 16-point average.

Johnson finished with 20 points also for a career-high.

“No, I never even mentioned that to Trayce,” Woodson said about his night against Illinois being just a bit higher when it comes to points. “Them days are long gone for me but it’s a hell of a game for him. You know, he played pretty much the whole game, and I rode him. A few times in time-out, I asked him if he was okay And he said, ‘Hey, I’m good, let me go.’ So we rode him, and we needed all 43 points.”

This was Marshall’s first road game after going 4-1 on a season-opening home stand.

Indiana came in allowing 52 points a game, No. 1 in the Big Ten and fifth nationally.

“Again, it’s the first time we’ve been tested. I mean, hey, it’s a part of basketball. But as a coach, man, you always want to see what your team is made of, “Woodson said. “We got down as much as 12, and it wasn’t no need to panic or anything like that. I mean, we weren’t playing well at that particular time. I made some substitutions. I came back once we got down 12 with the first unit and I thought our defense picked backup, Xavier (Johnson), especially, where early on, when Khristian (Lander) got in the game, we just weren’t into the ball.

“Taylor and Kinsey controlled our defense pretty much the whole game where we were beating our coverages. We weren’t getting them to our coverages, and that hasn’t happened much since we’ve been together as a unit. So that’s something we’ve got to work on and make sure that it doesn’t happen again like that.”

Woodson knew he would get a quality effort from a Dan D’Antoni coached team.

“I mean, we all watch film. They watch film on them, and I thought they were prepared. And we don’t take anybody lightly. It’s not that type of deal. You know, we knew that they were a good team. They are well-coached. I know D’Antoni’s teams. I’ve worked with Dan. His offense is as good as they come.

“I thought again our coverages weren’t solid early on and they were getting behind our defense for layups. I mean, they had I think as many points as we had at halftime in the paint, and that hasn’t happened since we been together as a ball club. So you know, it’s something that we were challenged. I mean, hey, it happens in basketball. But me as a coach, I want to see who is going to step up and make plays, and tonight I thought we did in the second half.”

Taylor’s point output is his best to date.

“Should’ve been more aggressive early,” Taylor said. “First time in an environment like that. Next time I’ve got to be more prepared.

“He can jump with any of those dudes,” Taylor said. “Good to see him on a big stage like that.”

“My whole team can play with those guys,” Kinsey said. “We belong here. It wasn’t the result we wanted. We made a couple of mistakes, stupid mistakes that we’ve got clean up.”

D’Antoni said he Herd got a bit sloppy after it took a 12-point first-half lead at 34-22 with six minutes left.

“A little loose at crucial times,” D’Antoni said. “We’ve got to take care of the ball. We’ll learn from this. They have a good defense. We scored against it. There are no moral victories. We showed we can play in any atmosphere.”

This is Indiana’s 50th season in Assembly Hall.

Marshall’s next game is Wednesday at Akron. Tip is 7 p.m. The Herd’s next home game is Saturday against Duquesne. Tip is at 7 p.m.