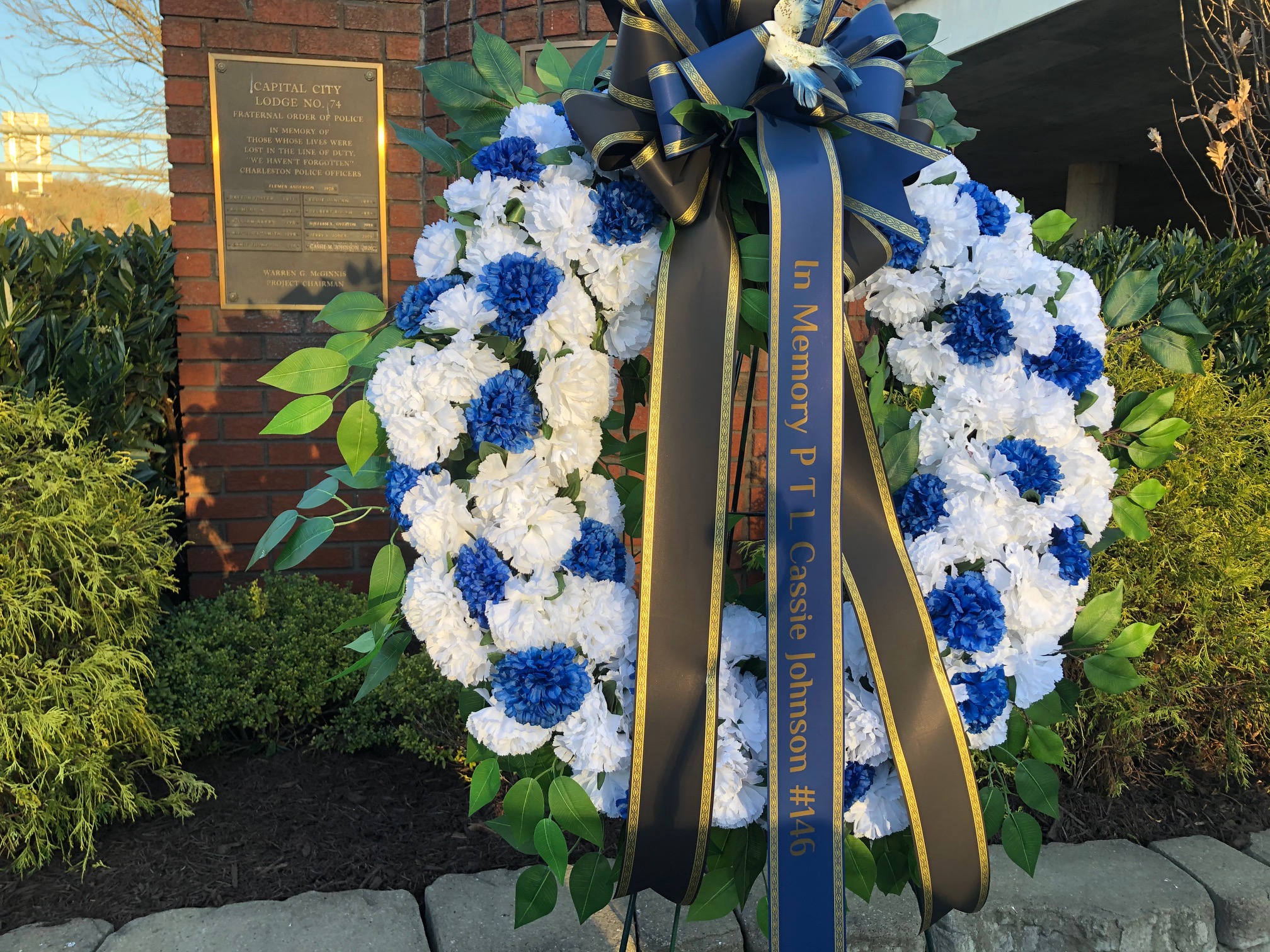 The wreath remembering CPD Patrolman Cassie Johnson that was placed at the memorial Friday.

CHARLESTON, W.Va. — It’s been a full calendar year since the death of Charleston Police Patrolman Cassie Johnson and Police Chief Tyke Hunt says a day has not gone by where he has not thought of his fallen sister.

Johnson died Dec. 3, 2020, at Charleston Area Medical Center at the age of 28, two days after being shot on the line of duty while responding to a parking complaint on Garrison Avenue. Thousands of people turned out for her funeral, including lining the streets of downtown Charleston for her procession.

Her life was remembered Friday by family, friends, community members, and dozens on the force at the CPD Police Memorial located at Pennsylvania Avenue and Washington Street at Interstate-64.

During the solemn ceremony, Hunt and Johnson’s mother, Sheryl Johnson, placed a blue and white wreath at the memorial with blue and black ribbons that read “In Memory of PTL Cassie Johnson #146.”

“Looking back it’s hard not to reflect on the roller coaster of emotions that we experienced when we first learned the news of Officer Johnson being shot,” Hunt said.

“She fought for so long in the hospital but her body could not keep going. Fortunately, her organs were able to keep it up and Cassie was able to do what she loved to do and that was to continue to help people and save lives.”

Johnson saved several lives by being an organ donor. A representative with CORE, the Center for Organ Recovery and Education, was among the speakers during the ceremony and said all West Virginians can honor Johnson in a meaningful way by registering as an organ donor.

“It’s very bittersweet to think that her legacy carries on through her organs and also through all the support we see here today,” Hunt said.

“But also we miss her very much. I would do anything to bring her back.”

Johnson was been remembered in several other ways since her end of watch including having her unit number of #146 retired by the Charleston Police Department (CPD). Over the summer Garrison Avenue was named Honorary Patrolman Cassie Johnson Avenue.

In March, Johnson was remembered by the West Virginia Legislature. There was also the establishment of the Cassie Johnson Scholarship for women entering law enforcement.

Several animal-themed donation events and pet supply drives have occurred at the Kanawha-Charleston Humane Association (KCHA) and in Charleston to honor Johnson’s love for four-legged friends. There has also been a dog park opening called ‘Emma’s Place’ in honor of her and her beloved dog.

Johnson began serving the city as a humane officer in 2017. Several friends from the KCHA and Johnson’s other pets were at the ceremony.

The ceremony began when dozens of CPD officers marched across Washington Street down to the memorial led by Hunt and Charleston Mayor Amy Shuler Goodwin. The remembrance also included a moment of radio silence by Metro 911.

“I wanted to make this a proud day because I am so proud of the service she provided our city and the true fight for justice up until her last moments. A very valiant and brave woman,” Hunt said emotionally.

“But I still can’t help but feel sadness. I was driving here earlier today and getting choked up, having to dry my eyes a few times. I can’t shake it, I still miss her.”

Johnson, a life long Charleston resident, was sworn-in to the force in January 2019, where she told MetroNews it was a dream come true to serve Charleston.

The man charged in Johnson’s death, Joshua Phillips, 39 of Charleston, is charged with first-degree murder. His trial is set for Jan. 10, 2022, in Kanawha County Circuit Court.