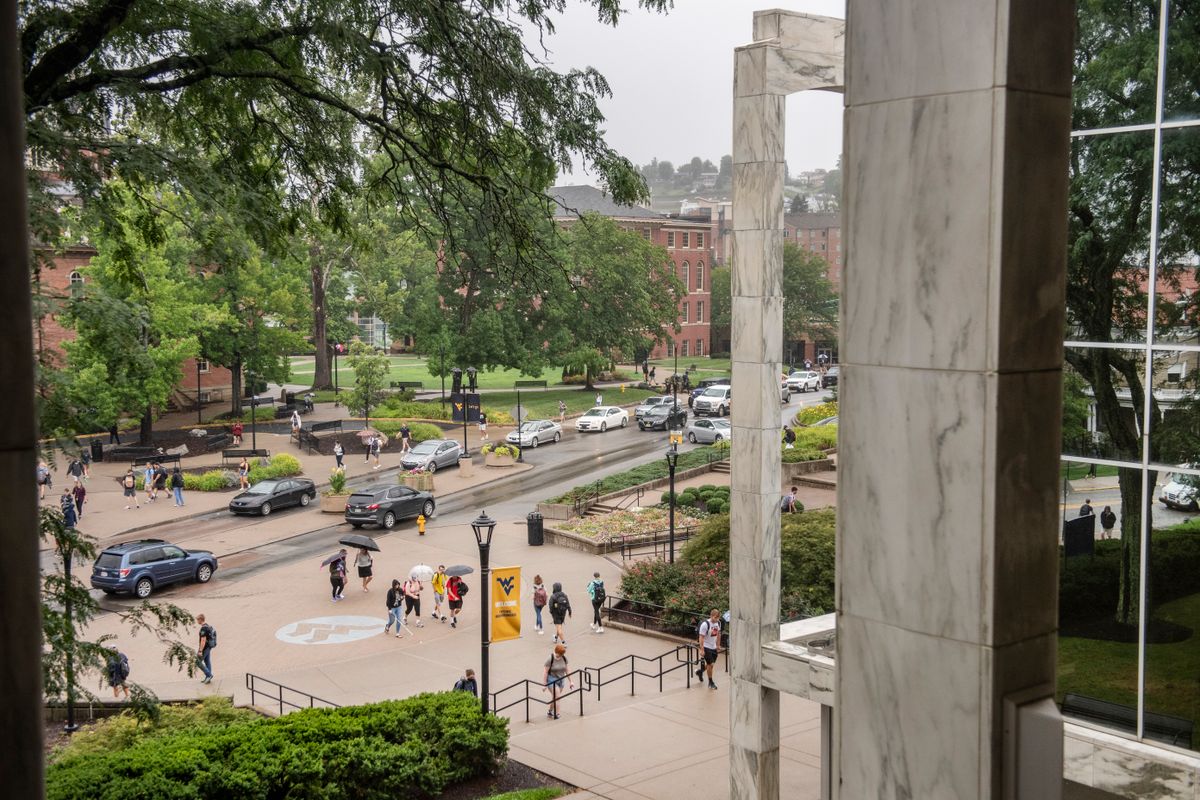 Staff and students participate in the first day of class for the fall semester on the Downtown Campus.(WVU Photo/Brian Persinger)

West Virginia University put out a community notice on Sunday because of concerns about a serious and specific mental health problem.

“West Virginia University is in receipt of an anonymous letter that described content related to suicide taking place in public areas of campus,” officials wrote in a notification to the university community.

The letter did not describe a threat to any person or groups, the university said, but did refer to noon Monday and both outdoors and an indoor location, the Mountainlair. University officials said they consulted with regional and federal public safety officials, as well as mental health experts. The university also increased security measures on the Morgantown campus.

“First and foremost, to the person who wrote the letter, the University cares about you and has resources available to help. While we do not know your personal circumstances, we do know this is a very stressful time of year and it can become overwhelming. You are not alone,” university officials wrote.

“To our campus community, if you are aware of someone who is struggling with thoughts of self-harm and may be sharing their thoughts through letter writing, poetry or illustrations, please call 911 immediately.”

We cannot stress enough that we want to help the person who wrote this letter.

You have reason to be here. We care about you.

If that person is reading this, please call the Carruth Center at 304-293-4431. We're waiting on your call so we can support you. https://t.co/BfhXWYcNCj

WVU officials note that the university already has devoted more resources for mental health services — while also recognizing the increasing demand and unprecedented strain among many students that still must be addressed.

“West Virginia University, like many other colleges and universities across the country, has seen significant increases in the need for mental health services and support – especially during the pandemic,” April Kaull, WVU’s executive communications director wrote in response to MetroNews questions.

“We have been engaged with students, faculty, staff and other constituents as we look for ways to best address these needs.”

Her comments about the need for student mental health services were made prior to the community notice that was issued on Sunday.

The issue of additional funding has become acute as leaders in WVU’s Student Government Association try to get the attention of Gov. Jim Justice, whose administration faces a deadline at the end of this month to spend the state’s remaining share of federal CARES Act funds.

West Virginia still has $127 million of its CARES money remaining, according to the state Auditor’s transparency website.

WVU’s Student Government Association on Sept. 15 passed a resolution in favor of the Mountaineer Resilience Project, requesting that an unspecified amount of that money be dedicated to student mental health.

A MetroNews story on Nov. 28 focused on the students’ request. It included response from the governor’s communications office, saying officials were aware but noting that no decision had been made. The story did not describe what federal money WVU had received already or detail the institution’s position on whether mental health needs are being adequately met.

The institutional funding issue drew the attention of the governor’s senior adviser, Roman Stauffer, who publicly questioned that aspect of the story.

This story by @BradMcElhinny fails to point out that West Virginia University has received over $100 million for COVID related needs:

Did this student ask WVU to fund this ever? https://t.co/CpwGM7lpkg

That, then, elicited a response from WVU freshman Azeem Khan, a student government senator who has been at the center of the mental health funding effort.

“This spring, we lost three of our classmates here at WVU. This resolution is about doing everything in our power to make sure that number doesn’t increase,” Khan wrote in a social media message. “Lives are at stake — and nothing should distract from the fact that this is a crisis which requires the leadership of our state government.”

Khan and student leaders Sophia Flower, Oliver Dowler, Logan Riffey and Tyler Seidel followed up with an op-ed in The Charleston Gazette-Mail: “We still hold hope to engage with the governor on this topic because of its importance,” they wrote.

Many have asked me for my reaction to the comments by a member of the Governor’s staff yesterday about the Mountaineer Resilience Project. I’d like to share my thoughts publicly below: https://t.co/ajNWYPB8mp pic.twitter.com/9qvwm9Aar3

West Virginia University officials have publicly recognized the pull on student mental health, including loneliness and isolation, for months.

T. Anne Hawkins, the director of WVU’s Carruth Center for Counseling and Psychological Services, outlined ongoing efforts — as well as additional needs — during a late-October presentation before a committee of the board of governors.

Hawkins told university officials that use of the counseling center rose by 30 to 40 percent even as enrollment grew by a comparative 5 percent.

Many of the issues troubling students have been on the rise over the past decade. But, coming through the pandemic, the university started seeing higher-than-ever reports of depression and general anxiety.

In response, Carruth added five new positions and increased its in-person appointments. The center also expanded support such as a partnership with Talkspace, allowing students to connect via app with licensed therapists at no cost.

The current-year budget for mental health services increased by about 9 percent, Kaull said.

WVU acknowledged the support from federal dollars it has received during the pandemic. “As it relates to Federal COVID-19 funding, we are appreciative of Governor Justice’s support of CARES Act moneys,” Kaull said.

After all federal funds have been drawn down, the University will have received $108 million in federal covid-19 dedicated funding from the various recovery acts: $48 million awarded directly to students to help offset their costs and hardships during the pandemic and $60 million for the university to offset increased costs and lost revenues.

The $60 million does not cover total university losses, Kaull noted, but it enabled continued investment in student services, including mental health services.

“We note that total covid-19 related expenses and revenue losses at WVU went beyond the allocated amount from the State and federal government. In fact, we also had to enact a 5 percent cut to make ends meet and to have the ability to invest in key priorities, including mental health.”

Khan, the student senator, said he is aware of the university’s financial challenges during the pandemic, as well as its continued efforts to support student mental health.

“We applaud the efforts that the WVU Administration has taken to provide students with support for our mental health. Their efforts and investments have improved and saved lives,” he said this past week.

“At the same time, we strongly believe that this crisis requires further attention and investments due to the ongoing covid-19 pandemic which has exacerbated this crisis.”

He proposed a variety of additional efforts. That could include extending telehealth options for students, creating hotlines for specific groups of students at risk such as veterans or sexual assault survivors or establishing a mobile counseling center for students with limited transportation options. More investment could go toward public service campaigns to reduce stigma.

Mental Health is a crisis on our campus which deserves the attention of our state government. Call Governor Justice & tell him to fund the Mountaineer Resilience Project. #yourvoicematters pic.twitter.com/j8kvhb5OZu

He and other student leaders are asking for a meeting with the Justice administration to explore what more may be done.

“After all, Governor Justice once said, ‘addressing the complex mental health needs of children, youth, and families is fundamental to the future of West Virginia…’ The current level of funding for mental health services at colleges in West Virginia is not adequate for a complex crisis, which is fundamental to the future of our state.,” Khan said.

“We are still hopeful that the Governor will take the time to meet with us to talk about how we can work together. Even though we are kids, our opinion still matters.”