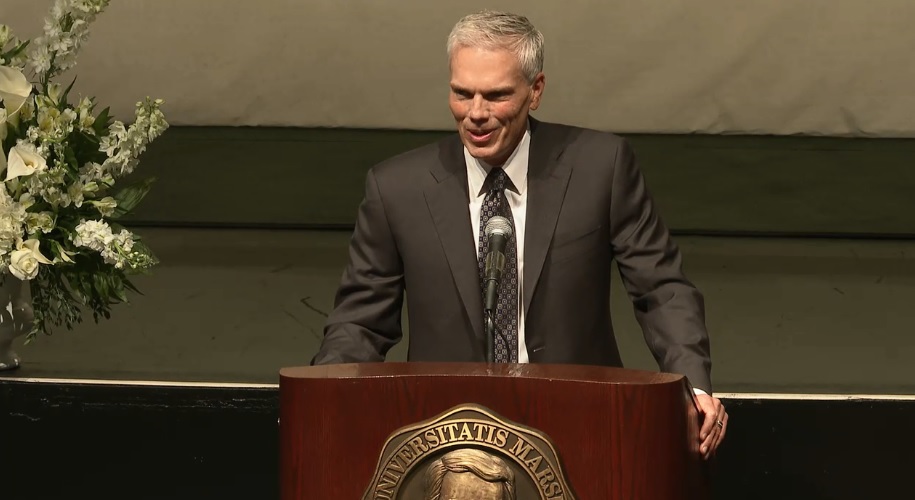 HUNTINGTON, W.Va. — Brad Smith is just a couple of weeks away from his life coming full circle in a way.

The former Intuit CEO, Marshall alum and Kenova native will return to his native stomping grounds to take over as president of Marshall University, replacing the retiring Jerome Gilbert on January 1.

Smith was named president-elect during a Board of Governors (BOG) meeting and press conference on October 28. Since then, he told MetroNews there has been no time to relax whether winding down his commitments in California as a tech executive or preparing for his first position in higher education with major decisions ahead.

“I have been engaging in listening tours, doing a deep dive in our financials, speaking with stakeholders, working with President Gilbert to do a knowledge transfer, and we’ve even kicked off two important searches,” Smith told MetroNews

Officials on the search for provost stated during a Thursday BoG meeting that the search profile goes public this week and will be shared across platforms and outlets. There will then be an eight-week period where the search will be open for candidates to submit resumes, recommendations and curricular vitae.

Smith. who will be the 38th president at Marshall, said he is looking for someone who has a depth of understanding of academia and faculty and what it takes to advance teaching and research as well as being an innovator. He said with being a non-traditional university president, the provost hiring may be his most important one.

“It places a premium on making sure you have someone who works with you in the provost position that understands the ins and out of academia, and the important things that faculty and staff make sure get addressed,” Smith said.

“It’s going to be a strong partnership between me and this provost.”

The search for the provost is expected to end with a hire at the beginning of April. The search for a permanent athletics director is just underway as Smith noted it kicked off in the past week.

Smith said the university would be looking for someone who understands the importance of athletics at Marshall and the commitment to academics. He also said the next athletics director should be strong in administration and innovation.

“We want someone who will come in new ideas and thoughts that will help build the gameday experience for our fans, create a great environment for our student-athletes and find ways to grow the success of our franchise,” Smith said.

Jeff O’Malley has been in the interim position since July when long-time athletic director Mike Hamrick stepped down. O’Malley has been with Marshall Athletics for 20 years as an associate director and chief of staff. Smith called O’Malley a strong candidate for the full-time position.

O’Malley also helped lead Marshall through conference realignment as the Herd is set to leave Conference USA and join the Sun Belt in the future.

Now when the Herd joins the Sun Belt remains to be seen. During a news conference on November 1, it was announced the university would join no later than July 1, 2023. Some reports indicate it could happen as early as the 2022-2023 academic year.

Smith, O’Malley and Gilbert were all part of the announcement with the Sun Belt. Smith said he has requested that Gilbert continue to help him into the new year. Gilbert confirmed during the most recent BoG meeting that he will be working part-time as an independent contractor to provide guidance and advice to Smith.

Smith said he will officially be moved into the Huntington area on December 28 in a temporary house in downtown Huntington. His wife Alys, whom he has joined together for philanthropy initiatives at Marshall and other organizations, will join Brad in early 2022 after wrapping up commitments on the West Coast.

Smith has a background in philanthropy, leadership and entrepreneurship with substantial credentials in Silicon Valley. He served as the CEO of Fortune 500 company Intuit for 11 years. He is the executive chairman of the board of Intuit, chairman of the Nordstrom board and a board member of Momentive (formerly SurveyMonkey). He formerly served on the board of Yahoo as well.

He is a well-known donor to Marshall giving multiple gifts of millions of dollars including a $25 million gift for the college of business in 2018. In recognition of the Smiths’gift, the college of business named its undergraduate and graduate schools the Brad D. Smith Undergraduate School of Business and the Brad D. Smith Graduate School of Business, respectively.

The Smiths most recently co-founded the Wing 2 Wing Foundation that supports education, entrepreneurship mentoring, and investment to showcase West Virginia for the nation. The foundation most recently developed the Ascend West Virginia program, paying talented individuals to move to the Mountain State.