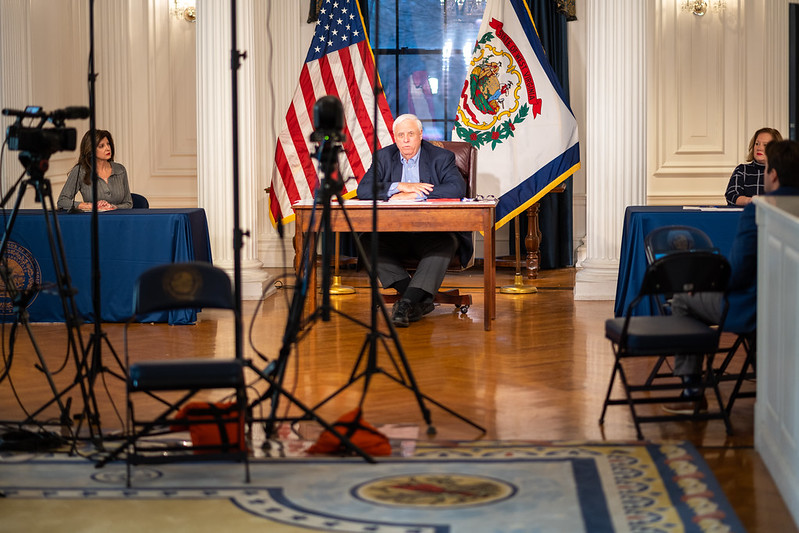 As medical facilities warn of staffing shortages and strain from another covid-19 surge, Gov. Jim Justice announced investment in nursing training and recruitment.

Officials acknowledged that the training of nurses, long in short supply in West Virginia, will pay off years down the road. But they indicated hope that stepped up recruitment efforts could alleviate current pressures.

The governor noted that last year 1,700 West Virginia nurses didn’t renew their licenses. And, he said, 68 percent said the reason was that they are exhausted.

The goal of the new initiative is to produce more than 2,000 nurses in West Virginia over the next four years, said Ann Urling, the governor’s deputy chief of staff.

“We know we have an incredible shortage of nurses, do we not?” Justice said.

“It will not be a one-time spend. This will be a renewing, absolute multiplier effect of dollars within our own state that will perpetuate our economy — but more than anything will give us what we need right now: proper staffing; we need proper staffing at our hospitals,” Justice said.

He did not specify how those programs might be maintained beyond the allocation from CARES.

His announcement came as state officials have issued urgent warnings about hospital staffing capacity. Leaders with the West Virginia Hospital Association warned this week that emergency rooms already have more patients than staff to care for them.

“Nurses are the heart of our healthcare system,” said Cynthia Persily, senior director of health sciences for the Higher Education Policy Commission. “Their work and dedication are invaluable. The covid-19 pandemic also has highlighted the critical shortages of nurses that we have both in West Virginia, as well as across the nation.

“So we have to do more to build up our workforce so we can more strongly support the nurses we already have, who are stretched so thin.”

The initiative, she said, will fully fund the West Virginia nursing scholarship program and develop a nursing faculty loan repayment program, as well as increasing capacity across training programs.

Asked by reporter Curtis Johnson of WSAZ-TV how that will help with immediate needs, Persily acknowledged that the most significant effects will occur over the next four years.

“Part of this is going to be recruitment of nurses from other parts of the country, which is no small challenge,” Persily said. “That recruitment into the state will be an important part of the solution as well.”

The executive director of West Virginia’s hospital association endorsed the governor’s proposal, saying it will encourage nursing staffing for the future while also helping with the urgent, immediate need for nurses.

He added, “The staffing challenges are not new to West Virginia. They have been exacerbated by covid.”

“We’ve all heard how desperately we need more health care heroes here in West Virginia, and we need to take care of the nurses we already have serving our friends and family throughout the state,” said Pack, R-Kanawha. “But we also need to recruit and train even more nurses to help boost our ranks.”