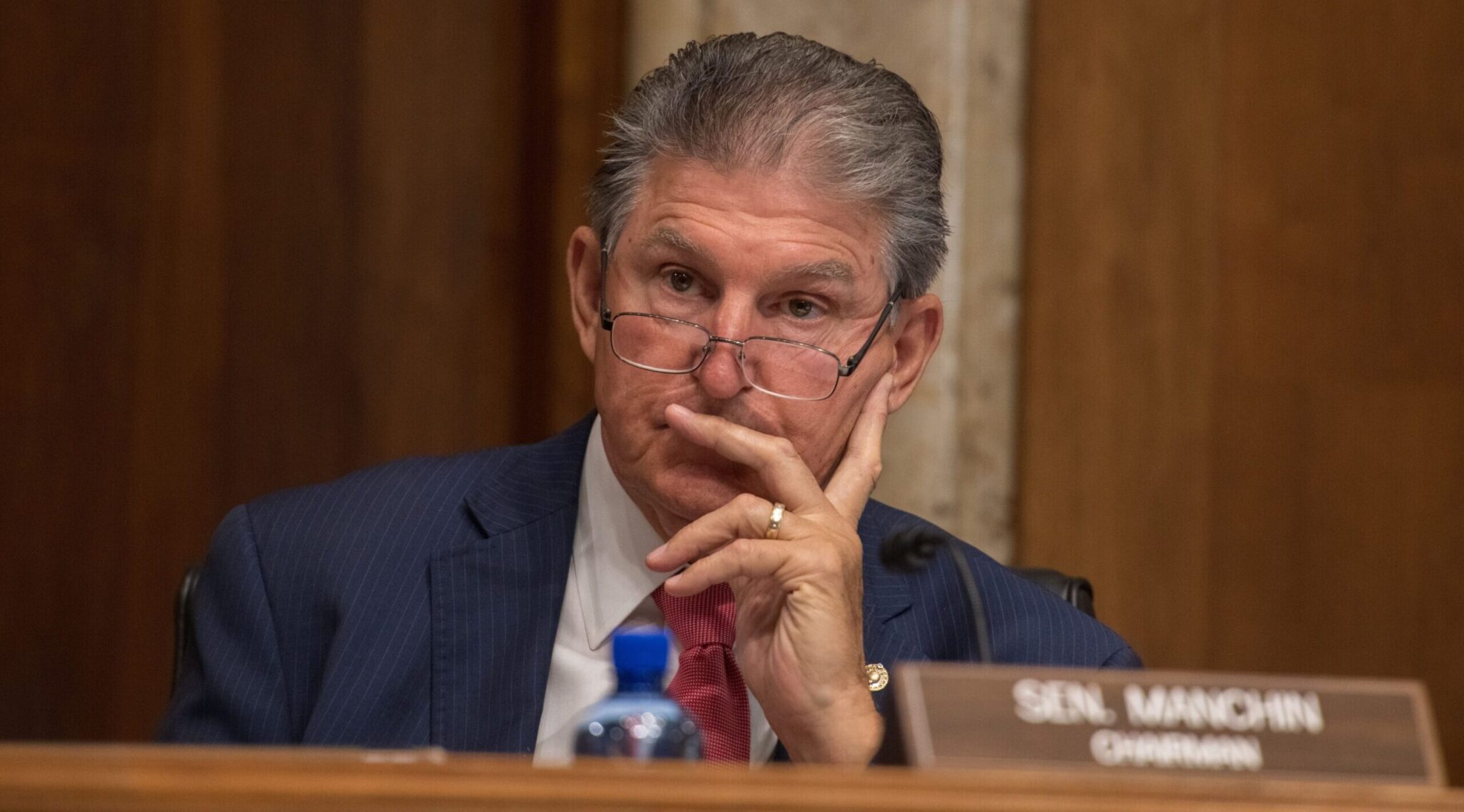 WASHINGTON — “It’s got a little bit of everything in here.”

U.S. Sen. Joe Manchin, D-W.Va., is sitting at his desk in the Hart Senate Office Building eating a bowl of ham, broccoli and cheddar soup. The senator — the moderate whose actions have captured tremendous attention this year — says he tracks what the Senate cafeteria offers.

“Boy, I had a good soup the other day. It was the best soup I’ve had in a long time. It was spinach and eggs,” he added.

Manchin spoke to MetroNews in early December, weeks before he announced he would not support Democrats’ sweeping domestic policy plan. Lawmakers were pushing to pass a full plate of items before the end of the year along with the framework, and Manchin was speaking to White House officials and colleagues about the proposal.

There were hints Manchin would not support the Build Back Better plan; the senator repeatedly raised concerns about its cost. Democratic leaders had cut the proposal from $6 trillion to $3.5 trillion, and President Joe Biden further reduced the framework to $1.75 trillion. The House of Representatives approved a $2.2 trillion version in November.

“I want to put money towards debt reduction,” he said in his office.

“I hope [fellow Democrats] understand that I’m consistent. I’m not just jumping all over the board, back and forth,” the senator added. “I just want to fix it so it works, and if I can’t explain it, I can’t vote for it.”

Journalists pressed Manchin about his stance on the plan for months, a familiar situation for the senator. When he walks out of his office or through the Capitol’s hallways and tunnels, there are often reporters waiting to ask him about legislation and developing stories.

“They’re persistent. They’ve got a job, and I respect the job. Everybody in your position has a job to do, and you try to respect that the most you can,” he added. “But they’ve got to respect also that sometimes, it gets annoying to continue to keep asking.”

The extensive focus became normal for Manchin as legislative debates continued. His vote is essential for Senate Democrats to pass their policy goals in the split chamber. His actions have had tremendous effects — as the future of the domestic policy proposal is in limbo — but Manchin maintains his mission in office is embedded in a desire for bipartisanship.

Manchin said 2021 — in which he marked 11 years in the Senate — has been his most challenging on Capitol Hill.

“You’re put into a position that you couldn’t imagine, nor did I ever think I would ever be in a 50-50 Senate,” he said. “What’s hard is you have 48 or sometimes 49 of your caucus senators thinking, ‘Yeah, we can do that.’”

Manchin maintains he is a “West Virginia Democrat” with a willingness to act independently from the Senate Democratic Caucus. According to FiveThirtyEight, Manchin voted around 50% in line with former President Donald Trump’s positions. He supports Biden, but the senator has not been afraid to criticize the president’s actions at times, particularly on energy and climate change.

Manchin in October rejected a Mother Jones report saying he considered leaving the Democratic Party, but later told reporters he offered to be an independent who caucuses with Democrats. Senate Minority Leader Mitch McConnell, R-Ky., has extended an invitation for Manchin to join Republicans.

Manchin’s actions and words have triggered the ire of his colleagues. Following Manchin’s announcement on the Build Back Better plan, Sen. Bernie Sanders, I-Vt., accused Manchin of being unwilling to “stand up to powerful special interests.”

Manchin has said he votes for what’s best for West Virginia, and he will only support actions if he can explain his reasoning.

“I finally just said, ‘I don’t know why you’re upset with me. Just elect more liberals,’” he said. “I’m very centrist. I’m fiscally responsible and I’m socially compassionate. And I come from a state that has always been very independent, and they know who I am. They don’t look at me like Joe Manchin, the big Democrat from West Virginia.”

He continued, “I told Bernie one time, ‘If I had 48 moderate Democrats and there was you and [Massachusetts Sen.] Elizabeth Warren, and you were willing to come in and meet me on something … I’d be tickled to death to get something done. You all have gotten to the point where you want everything as if you have 60 Democrats, and you don’t.’

Effective government from Manchin’s perspective is rooted in a willingness to compromise. Manchin has balked at considering changes to the filibuster, in which 60 votes are necessary for the Senate to advance most legislation. The House of Representatives requires a simple majority.

“What we’ve got to do is fix [legislation], and they got to make a decision of whether they can still support it,” Manchin said. “They got to say 50% of something is better than 100% of nothing. Make those decisions.”

Manchin was part of the group responsible for reaching a deal with the White House on infrastructure. The Senate in August voted 69-30 to pass a $1.2 trillion bill, with Sen. Shelley Moore Capito, R-W.Va., and 18 other Republicans voting in favor. Capito and the Senate Environment and Public Works Committee laid the foundation of the final measure with legislation on water infrastructure and surface transportation.

“It’s the greatest home run that he’s ever hit or any president in the last 30 years,” Manchin said, referring to Biden.

“No one could get it done. We worked together in a bipartisan way. It wasn’t driven by leadership from the Democrat or Republican side. It was a group of us — rank-and-file Democrat and Republican senators — that got together and said we’ve got to do something.”

“He should be credited for that. David put our state and what we’ve been working and fighting for above the pressure he knew he would get from the Republicans,” Manchin said.

“There’s not one place in West Virginia that is not going to benefit from that infrastructure bill,” Manchin said. “Not one.”

When asked about the state of bipartisanship in the Senate, Manchin pulled out a card highlighting legislation the chamber has passed since December 2020, including last year’s $908 billion coronavirus relief measure and a law expediting reviews of hate crimes directed toward Asian Americans during the coronavirus pandemic.

“Joe Biden’s got more done bipartisan than any president in their first year, but no one says it. They don’t talk about that,” he said.

Manchin’s relationship with Biden is being tested following the senator’s stance on domestic policy. During a Dec. 20 appearance on “MetroNews Talkline,” Manchin blamed White House staff for negotiations falling apart. Biden told reporters days later he and Manchin “are going to get something done.”

Part of the Build Back Better framework addresses climate change; the proposal dedicates $555 billion toward tax credits, industry incentives and programs directed at getting the United States to meet its goal of cutting 2005 greenhouse gas emission levels in half by 2030.

When he announced he would not support the plan, Manchin argued it would “risk the reliability of our electric grid and increase our dependence on foreign supply chains.” He highlighted the work of the Senate Energy and Natural Resources Committee — in which he serves as the chairman — with directing billions of dollars toward clean energy technology, but stated funding a transition too quickly would result in power crises similar to failures in Texas last winter.

The senator told MetroNews: “We’re transitioning, but don’t accelerate the transition because you want to add more misery. The transition should happen as you are transitioning. Something should be filling in behind to keep people working with opportunities to take care of themselves and their families. As a country, I thought they didn’t do a good job of that when I was governor and now [that] I’m in the Senate.”

Manchin and Sen. Debbie Stabenow, D-Mich., in March introduced legislation providing companies with incentives for building new facilities or retrofitting properties in areas impacted by economic changes. Half of the $8 billion would go toward communities affected by closures in the coal industry.

The United Mine Workers of America has urged Manchin to reconsider his stance on the Build Back Better plan, arguing the proposal would provide job opportunities to unemployed coal miners. The union also noted a provision extending benefits to coal miners with black lung disease. The current fee will expire at the end of the year.

“He will of course continue to work to shore up the black lung excise tax in the New Year to address the needs of our brave miners,” Runyon said.

Manchin has thought about what Congress needs to do in 2022. He noted lawmakers have to refocus on addressing the opioid epidemic and fentanyl use as the pandemic hindered services for people with addiction. He mentioned while the infrastructure law includes investments to improve internet access, legislators need to do more.

The concentration on Manchin will remain in the new year, which he understands. When asked how he managed this year, the senator jokingly credited the soup in front of him.

“I enjoy soup, let’s put it that way,” he said before shifting his tone.

“The only reason they’re looking at me is because I’ve always been voting independently. I’m the most bipartisan voter, OK? If it makes sense to me, I’ll vote for it.”