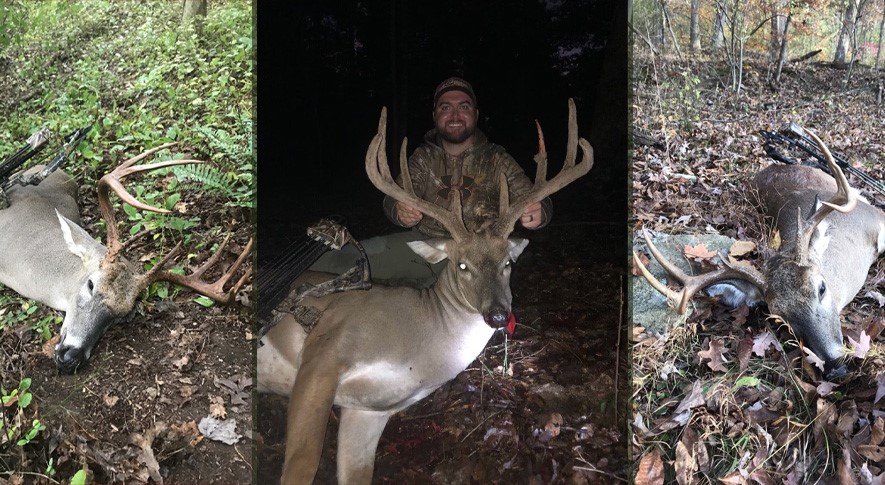 CHARLESTON, W.Va. — John Paul Tupta of Charleston is a life long hunter and through the years he’s killed a few nice bucks, but he’ll be hard pressed to top the 2021 hunting season. Using the opportunity of urban hunting, Tupta was able to harvest three wall hanger bucks in a single season.

“Two of those are from the urban hunts and one is from some property we always hunt in Lincoln County,” he explained in a recent interview for West Virginia Outdoors.

Tupta didn’t luck into these three big bucks, he invested some boot leather in finding them and was patient with his opportunities. He and his wife recently moved back to the Charleston area after living out of state for several years. He explained it was the first time in a long time he’d been able to dedicate serious time and effort to scouting and trying to figure out patterns for the deer he was after. The work paid off.

“I’ve had a couple of seasons in the past where I killed a good buck, but never multiple bucks in the same year,” he explained.

The first buck turned out to be his biggest. The bruiser was killed while hunting in the South Charleston urban hunt and only after his qualifying doe was taken on the first day he hunted. Hunters in an urban hunt get seven tags and two of them can be filled with antlered deer, providing an antlerless deer is killed before each of the bucks.

“I killed that first buck September 5th. The evening I killed him, he was with a group of six other bucks that were all six points or bigger,” he said.

The urban hunt so early in the fall allowed for more predictability as deer were still in a summertime pattern. The buck even still had some of his velvet on his antlers.

Fate struck a second time on a rainy day just after dropping his daughter off at daycare in downtown Charleston.

“I killed my doe September 21st in the Charleston Urban Hunt, so October 5th, the daycare opens at 7. I dropped her off, got in my stand and was sitting there on my phone and looked up and he was already in bow range. It had rained the night before and it was real quiet. I got up and delivered a perfect heart shot on him,” Tupta explained.

With two nice bucks and several does cleared out from within the city limits, John Paul began to concentrate on the property his family hunts in Lincoln County. He had a couple of bucks he had spied there which peaked his interest.

“This was November 11th, Veterans Day, and I had the morning off,” he explained.

Tupta had spotted a buck in the area on his trail camera which was unusual because of a scar on his back. The buck had been cruising a pipeline looking for does. John Paul set up on an oak flat near the spot and began to wait.

“I had a spike and a couple of does come by, but the does started acting strange. I look down the hill and I could see a deer. I couldn’t see his rack, but I could see that scar on his back. He came right up into bow range.

He let the arrow fly, and for a third time in one year he was field dressing a buck which would forever hold a special pace in his heart and hunting memories.

“This year was just really special. It’s the first time in a while I’ve had the chance to get outside and prepare for the season. ”

Although he kept several of the deer for his own family’s consumption, Tupta also donated several to the West Virginia Hunters Helping the Hungry program.