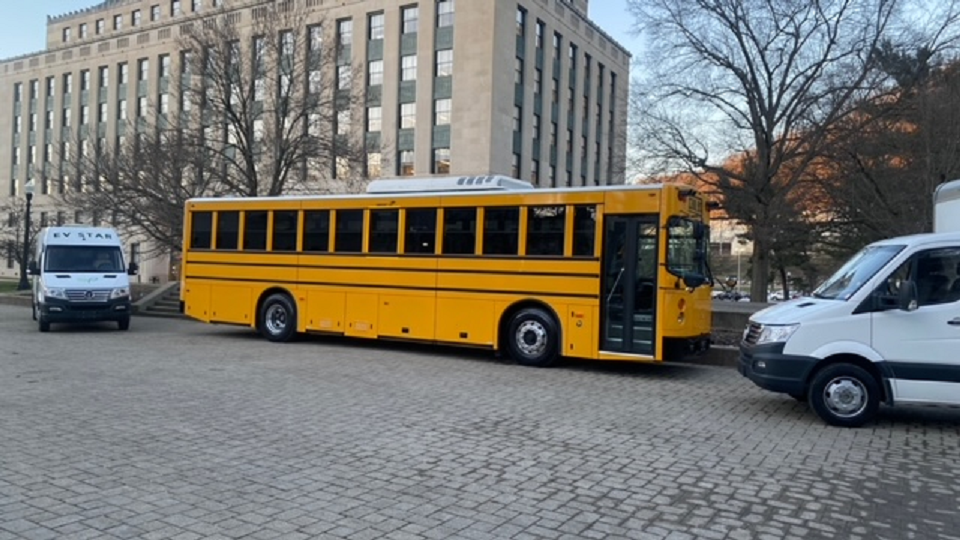 An electric school bus is parked on the state Capitol grounds.

GreenPower Motor Company Inc. has signed an agreement with the state to lease/purchase a 9.5-acre manufacturing facility, including an 80,000-square-foot building, where the company will  produce the school buses.

That is one of several economic development announcements to be made today, which would have been splashes in the Gov. Jim Justice’s annual State of the State address to kick off the annual legislative session. But the governor announced late Tuesday night that he has covid-19 so the announcements are going on without him.

At least one other big announcement is also expected today, a major steel manufacturer that has been the subject of public attention for a week. That is widely believed to be Nucor Steel with a major site announcement for Mason County. Lawmakers this week approved an incentives package aimed at the company.

Although Justice can’t participate in the announcements, he praised the electric school bus manufacturer in a statement.

“I’d like to be the first to welcome GreenPower to West Virginia with open arms. We’re thrilled that you’ve chosen to live and work in the paradise that our state offers,” Justice stated.

“West Virginia continues to be the best place to do business. I’m excited to help support GreenPower on this important project and for what the future holds for their great company and our great state.”

State officials said the operation will bring up to 200 new jobs to the state when manufacturing begins later this year, with the potential workforce to eventually reach up to 900 new jobs when full production is reached in 24 months.

“As we continue to diversify our economy, manufacturing these zero-emission school buses in West Virginia will open up a world of opportunities for our state,” Justice stated.

“Just as importantly, this development is going to change lives. Not only will it bring hundreds of great paying jobs to the Kanawha Valley, but the ripple effects on our state’s economy are going to be off-the-charts.”

South Charleston Mayor Frank Mullens said the community is excited to start preparing for the manufacturer.

“We’re looking forward to doing everything we can to make sure all the projections, whether they be jobs and revenue streams, come throughout — and I think they will,” Mullens said in an interview with MetroNews today.

The site is at the Smith Fasteners building, near the old Ordnance Center and behind the old fly ash pond where a new retail center is under construction. “It’s a good project for our city, and we’re excited about getting it across the finish line,” Mullens said.

Officials with GreenPower say, once the facility reaches full production, the total economic impact could reach nearly $500 million a year.

The company describes that as an all-electric 40-foot Type D battery electric school bus with a range of up to 150 miles on a single charge via a 194kWh battery pack.

The bus can seat up to 90 passengers with standard features that include air ride suspension, ABS disk brakes and pass-through storage.

“West Virginia has shown us to be a pro-business state that has a workforce ready to take advantage of clean energy jobs,” stated Brendan Riley, president of GreenPower.

“As West Virginia’s economy transforms, it is important to provide skilled and high-skilled jobs to help workers make the transition as seamless as possible. Our facility will provide both training and immediate employment opportunities with a competitive wage.”

GreenPower will partner with West Virginia’s Workforce Development Board and BridgeValley Community & Technical College for employee recruitment and training. Additional details on this aspect of the project will be provided in the future, state officials said.

Jeff Jenkins contributed to this story.