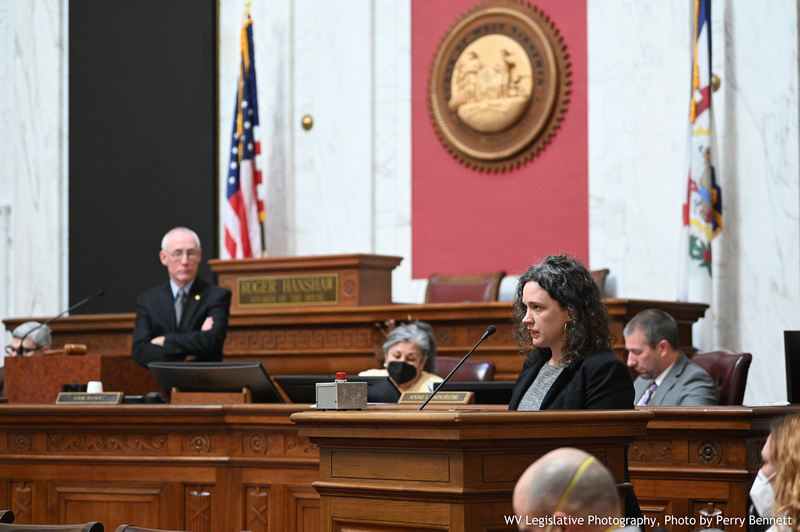 West Virginia citizens spoke out about a bill that would ban abortions after 15 weeks in West Virginia.

During a public hearing in the House of Delegates chamber, than 20 speakers addressed that bill plus another that would make it illegal to transport and sell aborted fetal organs in the state. The bill mirrors a Mississippi law under review by the U.S. Supreme Court.

Most speakers expressed views against the 15-week ban, although several spoke in favor of it. Each speaker got 2 minutes.

The 15-week ban passed the House Health Committee last week and next goes to the House Judiciary Committee.

“This is yet another attempt by legislators to regulate abortion out of existence,” said Loree Stark, legal director for ACLU West Virginia. She noted a stay on enforcing the Mississippi law while it is under federal review. “The enforcement of an unconstitutional law comes with a substantial risk of litigation.”

Emily Womeldorff of Planned Parenthood South Atlantic also argued against the bill. “Politicians have no place interfering in anyone’s pregnancy decisions or taking away our personal freedoms,” she said.

Margaret Chapman-Pomponio of West Virginia Free opposed both bills. “Indeed, this is a somber occasion,” she said. “What kind of message does this send to young people and to people who might have considered locating in West Virginia?”

Some speakers relayed personal experiences about how policies had shaped their lives.

Rita Ray, 80, said she was a pregnant high school student in Kentucky before Roe vs. Wade guaranteed the right to abortion. Ray said she was told to go to an alley, where a woman who could perform the procedure would meet her. She described the experience as terrifying.

“Too many women and girls died needlessly because they were denied safe reproductive healthcare,” she said.

Philip T. Dunn said he was the youngest of three brothers, and his mother endured difficult pregnancies. “My mom chose life in 1957,” he said.

“To me, life is precious. Sometimes the life you save today, you may not realize what’s involved or what that entails until years later.”

“As Americans, we believe that life is an inalienable right given to us by our creator,” Hodge said, echoing lines from the Declaration of Independence.

Following Dec. 1 oral arguments, a ruling by Supreme Court justices could roll back what was established in the earlier Roe vs. Wade case, as well as the related Planned Parenthood vs. Casey.

Mississippi’s law established a statewide ban on abortion after 15 weeks. That’s weeks earlier than what Roe vs Wade established, with viability at 23 or 24 weeks — or longer in cases where the patient’s life or health is at risk.

Other states, including Florida, have been moving to get in line with laws like Mississippi’s. Other states, like Vermont, will be change their laws to ensure access to abortion.

In West Virginia, House Bill 4004 still has a long path through the Legislature. It now goes to the House Judiciary Committee before any consideration by the full House or the state Senate.