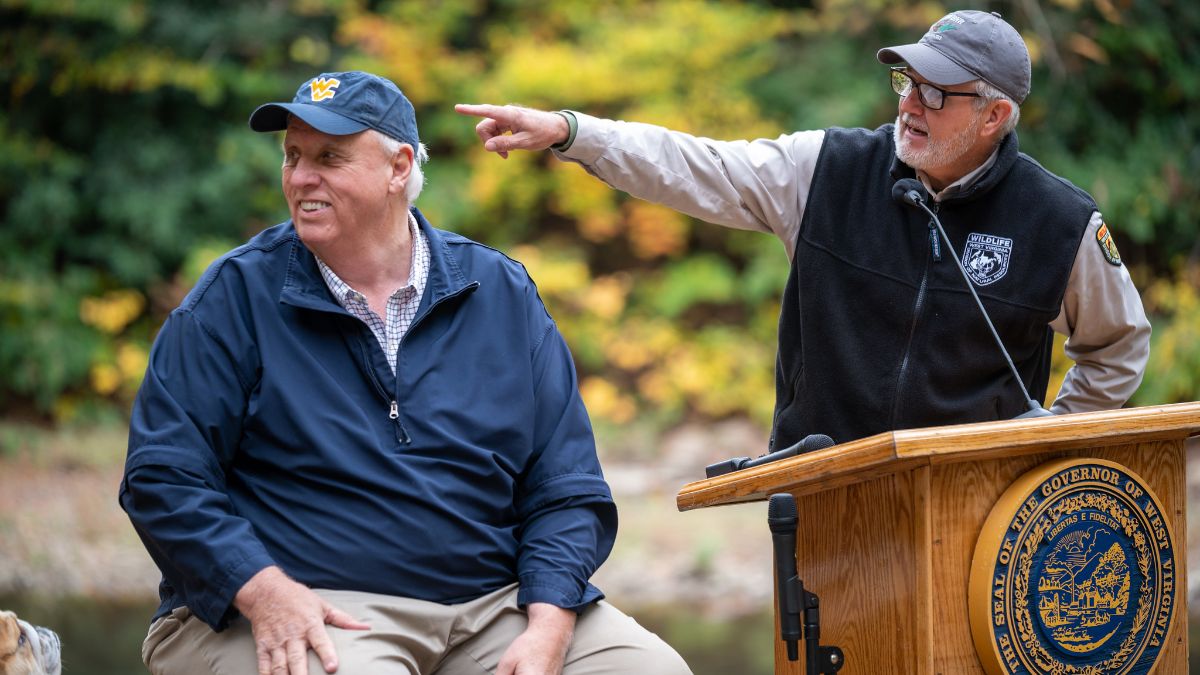 Governor Justice and DNR Director Steven McDaniel during the announcement of the new stocking for the Guyandotte River.

CHARLESTON, W.Va. — West Virginia Division of Natural Resources Director Steve McDaniel is leaving his post after five years on the job. McDaniel was hired early in Governor Jim Justice’s first term and said he initially planned to leave in four years, but Covid delayed a lot of projects he hoped to finish before he vacated the office.

Speaking with MetroNews, McDaniel said the time had come.

“Five years away from your family is a lot. They’ve sacrificed a lot for me to follow this dream and work for the state of West Virginia, but it’s now time for me to get back to what’s most important and that’s spending time with them,” McDaniel said.

McDaniel’s tenure at the agency was eventful. He looked back on several accomplishments with pride.

“I’m glad to see we finally got Sunday hunting statewide. I’m proud we just came off three straight years of increases in hunting and fishing license revenue. We added over 85,000 acres of public hunting land during my tenure and we brought in an additional 60 or 70 elk while I was here,” he explained.

McDaniel was also in charge of dealing with a long backlog of deferred state park maintenance. Under his guidance and that of the Justice Administration, the state invested $150 Million dollars in upgrades and infrastructure improvement. McDaniel also helped form an endowment fund with gas and oil royalties along the Ohio River for future projects.

“Getting that West Virginia State Parks Endowment started will get it to where we’ll never have to worry about having the money to fund infrastructure repairs for the State Park System again hopefully,” he explained.

Although he’ll no longer be in charges of the agency, McDaniel indicated he plans to remain on in an advisory role for the foreseeable future to help with the transition to a new director.

“The Governor has asked me to stay on in some capacity and I certainty embrace that because we’ve got a lot of projects to finish, but I’m going to fish more, I know that,” he said.

Governor Justice issued a statement thanking McDaniel for his service.

“Steve is a true friend of mine and has been a superstar in my administration. He has served the people of West Virginia incredibly well for five years and I sincerely thank him for his service to our state. While I am happy he will remain part of my team in an advisory role, I surely understand his desire to spend more time with his family and I wish him a happy retirement and nothing but the best in all of his future endeavors. Without any question Steve’s footprint on our DNR will be remembered for decades, if not centuries, to come. What we’ve been able to accomplish together in just five short years is absolutely remarkable. It has been a true joy to work alongside such a talented man.” said Justice in a press release announcing McDaniel’s departure.

McDaniel’s last official day will be January 31st. Administration officials said the new DNR Director will be named at a later date.