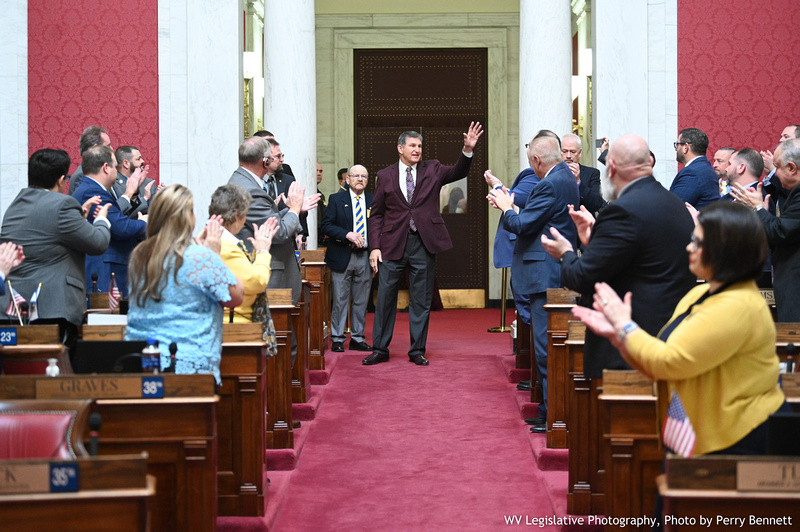 Leaders in West Virginia’s Democratic Party passed a resolution calling on members of the state’s congressional delegation, including a prominent senator, to support President Biden’s Build Back Better agenda.

The state party chairwoman expressed optimism that there still might be some form of the policy package that Senator Joe Manchin could support.

Manchin’s office says he still has significant questions, though.

“West Virginians elected Senator Manchin to be an independent voice in Washington and that is what has always been,” stated Sam Runyon, Manchin’s communications director.

“He has clearly articulated his policy concerns with Build Back Better which are rooted in rising costs of living as inflation soars, the ongoing pandemic and the geopolitical uncertainty around the world. He continues to work to improve the lives of every West Virginian.”

Manchin is the top elected Democratic officeholder in West Virginia. Members of the State Democratic Executive Committee on Monday evening passed the resolution asking for support for Build Back Better, which has stalled in the U.S. Senate.

The resolution cites components of the policy proposal such as continued financial assistance for parents, universal preschool, Medicare expansion to cover dental, hearing and vision care and paid family leave.

“We, the West Virginia State Executive Committee therefore call upon all of West Virginia’s elected congressional representatives to immediately support the passage of President Biden’s Build Back Better agenda through the budget reconciliation process requiring a simple majority of U.S. Senators voting in the affirmative,” the resolution states. 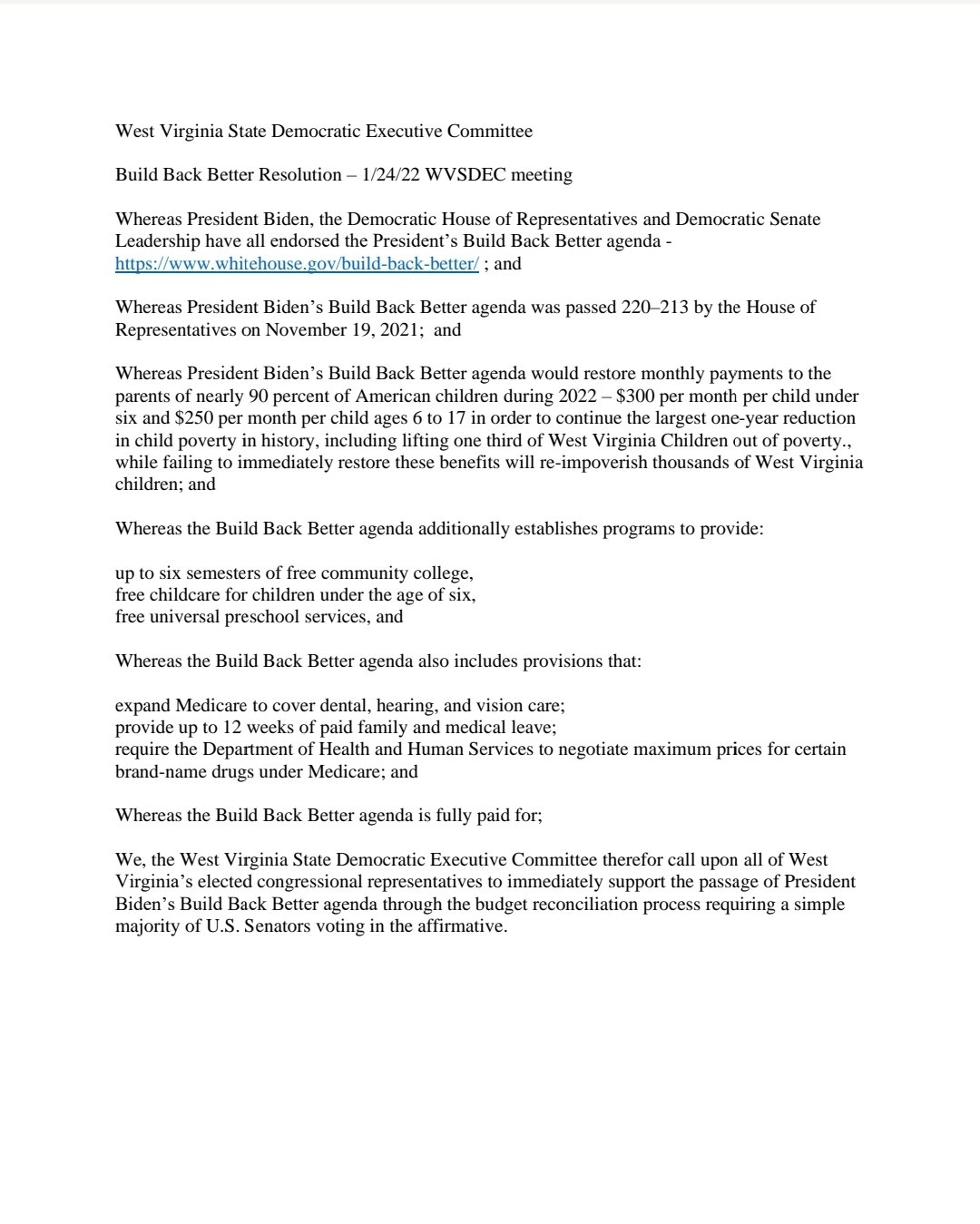 The other members of West Virginia’s congressional delegation are Republicans who have said they do not support Build Back Better.

With an evenly-split U.S. Senate, Manchin’s vote has often meant the difference between policies passing or failing.

Manchin announced Dec. 19 during an appearance on “Fox News Sunday” that he cannot support Build Back Better, citing its financial framework and other factors such as inflation. “This is a no,” he said. “I have tried everything I know to do.”

Now there is continued talk about considering a revised version of the policy, either as one bill or by separating it into some of its components that could achieve popular support.

“We’ll be talking to everybody who wants to talk,” he told reporters before leaving the U.S. Capitol last week. “We’ll just be starting from scratch.”

Belinda Biafore, West Virginia’s Democratic Party chairwoman, alluded to talks between Manchin and Biden that still could result in an agreement.

“The Committee is aware and is encouraged that Senator Joe Manchin is working directly with President Biden to get a plan together that will work for everyone and help West Virginia,” Biafore stated Tuesday evening.

The party’s newly-elected vice chairman, Mike Pushkin, also suggested Manchin still might be able to get behind the policies.

“This resolution recognizes that there are a lot of good things in the BBB better plan for West Virginia, not the least of which is that much of it is paid for through a billionaires tax increase that wouldn’t impact a single tax payer in West Virginia, not even Jim Justice,” said Pushkin, a member of the state’s House of Delegates.

“Senator Manchin has spent his entire career fighting for West Virginia.  We’re confident that he will negotiate a fiscally responsible package that will provide relief for West Virginia working families while not contributing to inflation.”

Organizations of all kinds have been in Manchin’s ear about Build Back Better, including different groups that traditionally support him politically.

The West Virginia Chamber of Commerce has pushed against the legislation. The United Mine Workers has expressed support because of its provisions to extend funding for black lung benefits as well as incentives that could represent job opportunities in mining communities.

Manchin made a surprise appearance Tuesday at West Virginia’s state Capitol. He addressed both the state Senate and the House of Delegates, where Republicans have supermajorities, and received applause after a speech about bipartisan policymaking and the benefits of productive policy.

“The country wants us to come together,” Manchin told state legislators. “We have our differences, but not about people. Remember this, it’s not the American people or West Virginians who are divided. Sometimes we divide ourselves, and we can’t do that. So look for the commonality.

“The best politics is good government. Do something good, we all take credit for it. The bottom line is, we’re there to help.”

Great to be back in @wvhouse and @wvsenate today. I had the chance to talk with so many West Virginians in our Capitol and hear their common sense thoughts and ideas on how we can make our state and country work better. pic.twitter.com/pYKWeoaLsZ