West Virginia’s only Black, female delegate was targeted with an anti-abortion message showing an image of a klansman.

Delegate Danielle Walker, D-Monongalia, received the message in an email on Feb. 1, the first day of Black History Month, when after she introduced a bill meant to ensure abortion rights.

The subject line was “Your plan.”

The image of the Ku Klux Klansman was captioned: “What do you think the coward hiding under his dunce cap and face mask thinks every time he hears about a black child has been aborted? Be Pro-Life as if your race depended on it! It’s the America thing to do!”

An email with the image was sent directly to Walker, and the group specifically addressed its Facebook post to her:

“Delegate Danielle Walker, West Virginia State Legislator for Monongalia County, 51 District the idiot featured in the picture below is an ally of yours and holds the same beliefs you do that the killing of children who look like you is a good thing!”

Late today, the organization issued an apology for the graphic “uses a clearly racist image.” The intent, according to the statement, was to “point out that racists would likely support the eugenic abortion of Black people.”

“In an effort to oppose racism, I composed a poorly designed and easily misunderstood meme that unintentionally conveyed racism,” wrote Richard Desmoske of Berkeley County Right to Life. 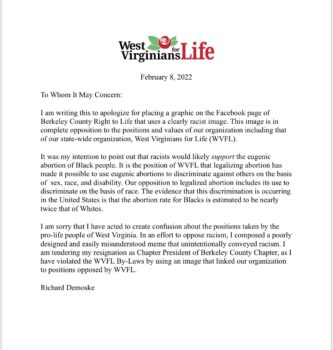 Walker was furious and sorrowful today.

“For a Black woman, the only Black woman currently in both houses in the state of West Virginia, on the first day of Black history month to receive this hate mail is beyond my understanding.

The Legislature, which is in its annual session and grappling with abortion issues, is also weighing policies to regulate anti-racism. A senator has sponsored a bill that would establish a tipline for people to report classroom lessons about race. A bill moving in the House would require school systems to post lessons about sex, race of ethnicity.

Walker, who was first elected to the House of Delegates in 2018, spent much of the first day of this month discussing a bill she had sponsored with fellow Delegate Evan Hansen to roll back some of the restrictions West Virginia has placed on abortion in recent years.

That effort came while delegates are considering a bill with a far greater chance of passage that would halt abortions at 15 weeks, in line with a Mississippi law under review by the U.S. Supreme Court.

Walker has often talked about her own experiences as a mother who went through an abortion — as well as the sorrow of losing her grown son to a chronic, fatal illness last summer.

Walker didn’t manage to look at her email until a day later. And she was not immediately aware of the corresponding Facebook post.

“I don’t think I opened it up until late Tuesday night due to duties and other obligations this legislative session. It startled me because I didn’t know at the time that it was actually a post,” she said.

She remained quiet about the post until this week when pro-life activists rallied at the Capitol. Their presence Monday brought everything flooding out.

Walker spoke at length about the KKK image in a Facebook livestream Monday evening, at one point saying she is so concerned about her security that she would wear protective clothing while exiting the Capitol that evening.

Holding up a printed version of the email, she tearfully said, “For some of you who have only seen a white sheet and that hat on movies but not up close and personal, you are privileged.

“But some of us who had to see the remnants in our photo album of Black churches being burned down, of Black men and Black children, sons, being hanged in trees or drug behind vehicles or beaten to death or poured with gasoline and set on fire, erasing their wives, or even throwing bombs in their homes, how dare you send that to me?”

To those watching, she said, “See, I’m going to sit with you and we’re going to be uncomfortable tonight.”

Today she assessed, “This is disgusting. I’m not saying every person in Berkeley County feels this way, but West Virginia we must do better.”

“I am not ally to any white supremacist. But in that same breath, I do love all my neighbors. No one shall place hate in my heart. That is not who I am.”

Expressions of outrage poured out on Walker’s behalf.

Jill Upson, a Republican and former delegate who now leads the state minority affairs office in the executive branch, commented on the post that the imagery and sentiment are inappropriate. Upson said the organization should take it down.

“This is NOT what being pro-life means! Being pro-life means loving the mother and the child. This sickening meme conveys hate! How DARE YOU post this AND then hatefully tag Delegate Walker in it?!!!!!!!” Upson wrote.

“I am calling on you to not only remove this hateful post, but to PUBLICLY apologize to Delegate Walker, and NEVER create a hateful meme like this again.”

Delegate Caleb Hanna, a Republican who is one of three Black delegates in the House, publicly agreed with other comments that the post was inappropriate. “I’m pro-life all the way, but I definitely agree,” he wrote. In support of Walker, he wrote, “Stand strong.”

I’m pro-life all the way, but I definitely agree. Stand strong @officialdaniwv https://t.co/VDQyIosMSx

“This graphic is a statement of hate and was intended to reach Delegate Walker as a threat. It should be treated as such,” stated leaders of the party.

Walker today said she is willing to have difficult conversations, to engage on the thorny issues and to listen. But she said this was not an appropriate way to send a message.

“I was targeted,” she said, “and we need to make sure that is out there.”