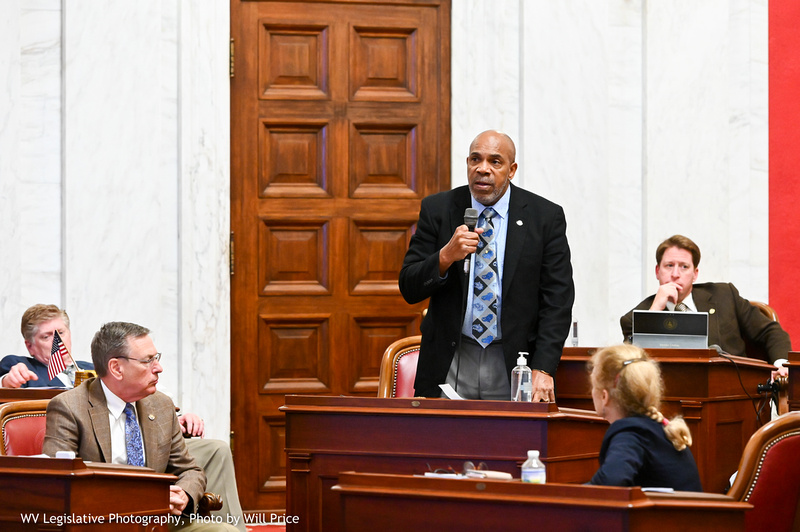 Senator Owens Brown speaks on the floor of the chamber. (Will Price/West Virginia Legislative Photography)

West Virginia senators want to highlight the significant of today, Feb. 12, in historical moments that intertwine the rights of Black Americans, the president who led the Union during the Civil War and West Virginia’s breakaway to become a state.

Brown highlighted the Feb. 12 foundation of the NAACP and the civil rights organization’s connections to West Virginia. And Senator Charles Trump, R-Morgan, focused on the birthday of President Abraham Lincoln, whose decisions led to West Virginia’s statehood.

Both officials made their comments in speeches on the Senate floor on Friday.

Brown traced the NAACP’s creation to Harpers Ferry in Jefferson County, describing early organization efforts that took place there because of the significance of the raid by abolitionist John Brown.

“So West Virginia is part of the NAACP’s history,” Owens Brown said. “Many people might ask, Why Harpers Ferry? Well, Harpers Ferry is where John Brown, a great American, sacrificed his life to free 4 million people. Unfortunately we do not have a statue in West Virginia of John Brown.”

Brown led the raid on the arsenal at Harpers Ferry on Oct. 16, 1859. He was captured, tried and hanged in nearby Charles Town on Dec. 12 that year.

A group of African Americans led by W.E.B. DuBois formed an effort called the Niagara Movement,a precursor to the NAACP

In 1906, that group had its first meeting in the United States on the campus of Storer College in Harpers Ferry, chosen in part because of the connection to John Brown.

The other significance of the location was the mission of the college. Storer  was established in 1867 as a mission school to educate former slaves. For a quarter century, Storer was the only school in West Virginia providing African Americans an education beyond the primary level.

Senator Hannah Geffert, D-Jefferson, spoke about this piece of history. “That was the beginning of the NAACP in Berkeley and Jefferson counties,” Geffert said.

By 1909, the mission of civil rights workers had become more urgent, working to assure access to voting rights and equal education opportunities. More than 60, including DuBois, were invited to an organizational meeting in New York set for Feb. 12 that year, a date meant to coincide with the 100th anniversary of Lincoln’s birthday.

Later that year, the organization’s name was established as the National Association for the Advancement of Colored People, incorporated as the NAACP in 1911.

Owens Brown had been president of the West Virginia NAACP before being appointed to the Senate earlier this year. His appointment made him the first African American man to serve in the chamber.

He described the contributions of the NAACP during his floor remarks. “Over the years, the NAACP probably has been the most effective body outside of this government in getting legislation passed,” Senator Brown said, referring to desegregation, the Brown vs. Board of Education case over “separate but equal” schools, the federal Fair Labor Act, Voting Rights Act and Fair Housing Act.

“Many people probably don’t know the work of the NAACP, but people should be very proud that the NAACP was born in this state,” he said.

Trump, the Senate Judiciary chairman, then turned to additional significance of Feb. 12, Lincoln’s birthday. Lincoln gave the go-ahead for residents of western Virginia who wanted to break away during the Civil War to form their own state.

“We revere Lincoln because he’s the author of our statehood,” Trump said.

Trump reflected on the troubles of the era dominated by a war over slavery.

“I like, sometimes, when we have conflict or troubles or struggle with issues, to think about that time. It always leaves me feeling how blessed we are now. We have disagreements. We have arguments. But this is nothing,” he said.

“The arguments we have now are among people who love one another, treat us as brothers and sisters, nothing like what happened in the middle of the 19th Century when the country went to war over many things, primarily the issue of human slavery.”

He continued by saying, “For a long time in the states of the former Confederacy there’s been an effort to rewrite some of that history to convince people it wasn’t about that. But that’s what it was about.”