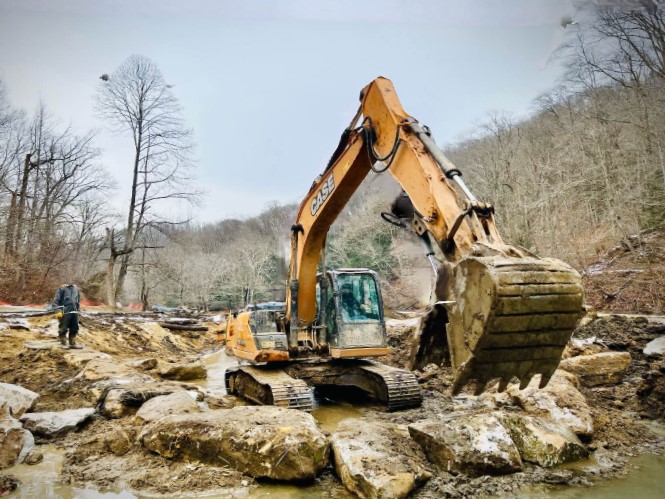 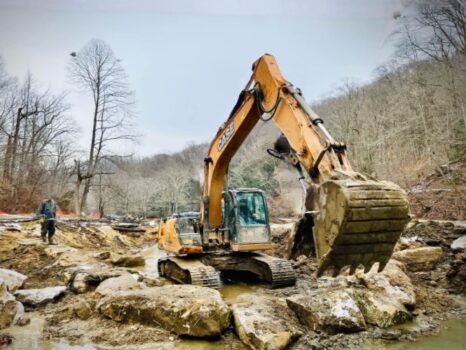 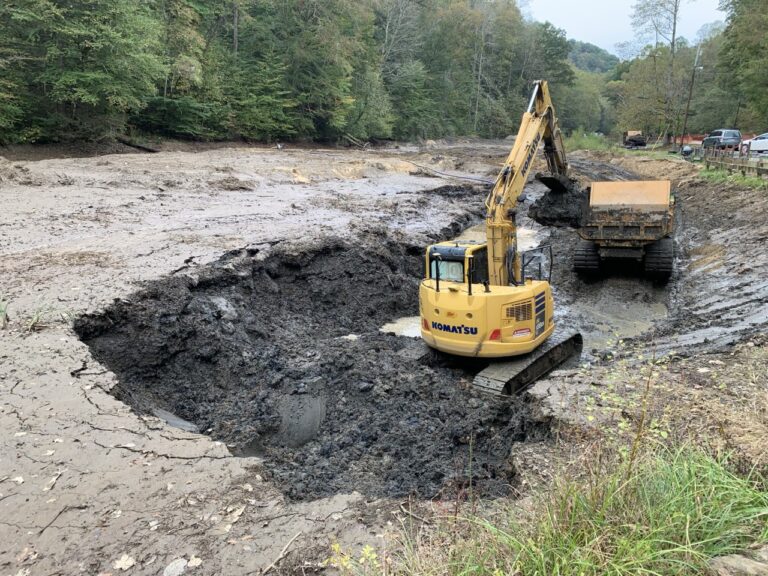 Crews remove the sediment from the former Kanawha State Forest Pond--the problem which prompted the restoration of Davis Creek and removal of the dam. 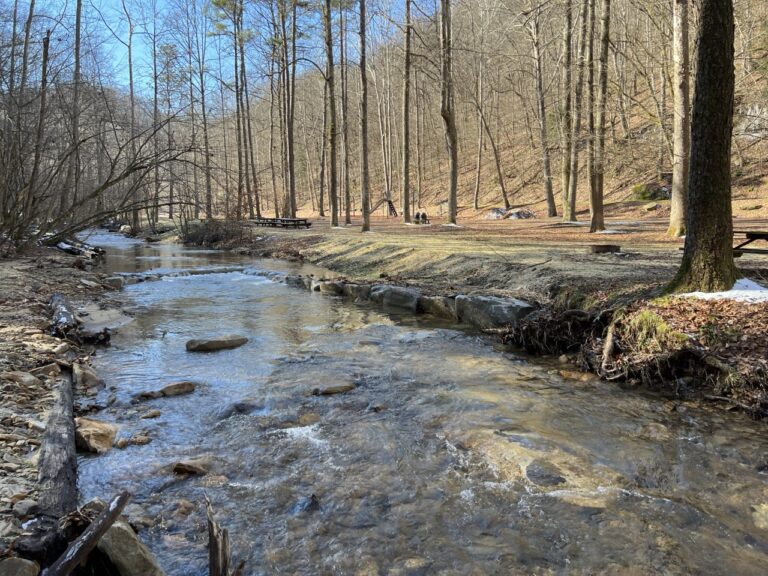 Crews rebuilt the banks and directed water toward the middle of the channel to protect the stream integrity from high water events in the future and to create solid fish habitat. 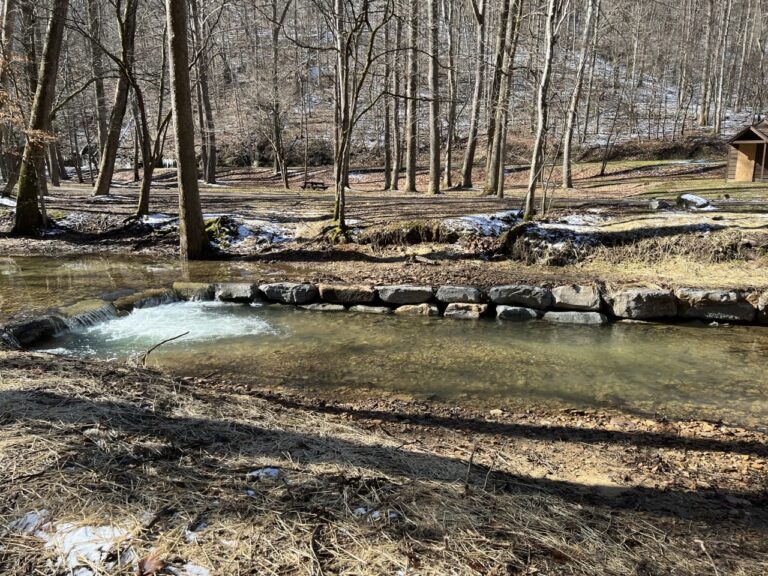 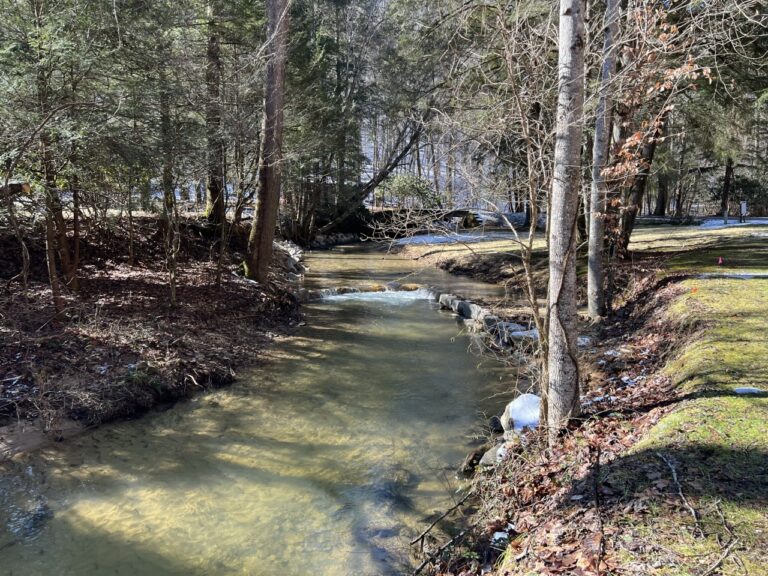 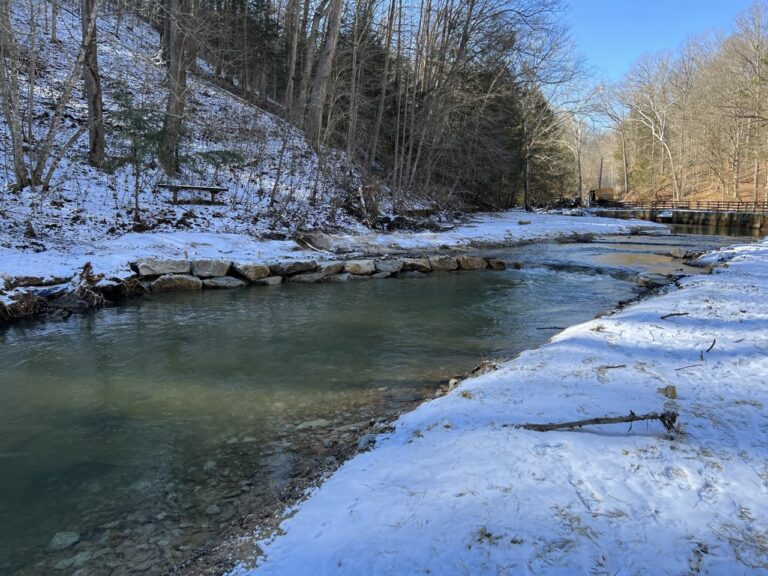 CHARLESTON, W.Va. — A project to restore Davis Creek in Kanawha State Forest to it’s original channel is nearing completion. The West Virginia Department of Environmental Protection is overseeing the project which is due to be completed around the beginning of March.

The work on the project to remove the old Kanawha State Forest fishing pond started in October, but the project has been on the drawing board for several years. Aaron Settle is overseeing the work for the Department of Environmental Protection. He said it started when the Division of Natural Resources came to them with the idea to take out the old dam.

The dam was built in the last 1930’s by the Civilian Conservation Corps and was originally built to create a swimming hole on the forest property for local recreation. It didn’t last long as a swimming hole and later evolved into a trout pond. But it wasn’t well engineered and according to Settle it was become more trouble than it was worth.

“The dam was catching all of the sediment coming down Davis Creek and the pond was filling up with sediment to within about 18 inches of the crest,’ Settle explained in a recent edition of West Virginia Outdoors.

The pond had been dredged a couple of times, but continued to refill with silt. The DNR was running out of places to put the sediment and the removal was costly, so they went to the DEP for a possible solution.

“We removed the dam and within the footprint of what was the pond we have reconfigured Davis Creek to a more natural stream setting to what you would find pre-dam constructed,” he said.

The project also included placement of large rock structures and woody debris revetments along the stream bank. The design is aimed at protecting the stream from future high water evens and directing the flow toward the center and into the channel and away from the bank.

“The pools we create will wash sediment out of themselves through scour when the water comes over the rocks. The force of the water during high flow events just moves that sediment out of the pools. That way you don’t repeat the problem you had at the dam where all of this habitat you just built you lose due to sediment load,” Settle said.

Crews have removed the thick layer of settlement in the old pond footprint and have restored the stream upstream a mile upstream from the dam to the bridge at the main office for the state forest.

“We’ve enhanced the fishery habitat on Davis Creek in hopes of maybe one day opening all that up for recreational trout fishing,” he said.

Outdoors
Tucker County hunter makes history with a doe killed in October
Steven Shaffer of Montrose, W.Va. killed a doe in the opening minutes of the first of the 2022 split antlerless season, but in doing so he also became the first in West Virginia to ever kill a deer with an air rifle.
By Chris Lawrence
Outdoors
Gilbert, W.Va. hunter is November winner in the Hoodoo Sports Trophy Photo Contest
Jessie Hatfield of Gilbert, W.Va. wins a Hoodoo tumbler set after his picture was randomly drawn from all entries.
By MetroNews Staff
Outdoors
Charges dropped in McDowell County poaching investigation
David Craft, formerly of Statesville, N.C. fought allegations he illegally killed a deer in McDowell County until the case was finally dismissed earlier this year
By Chris Lawrence
Outdoors
Logan County hunter kills an oldie
It's rare for any buck in West Virginia to outlive his physical potential, but the buck killed by Bucky Sargent of Logan in November 2022 led quite a life to the very end.
By Chris Lawrence