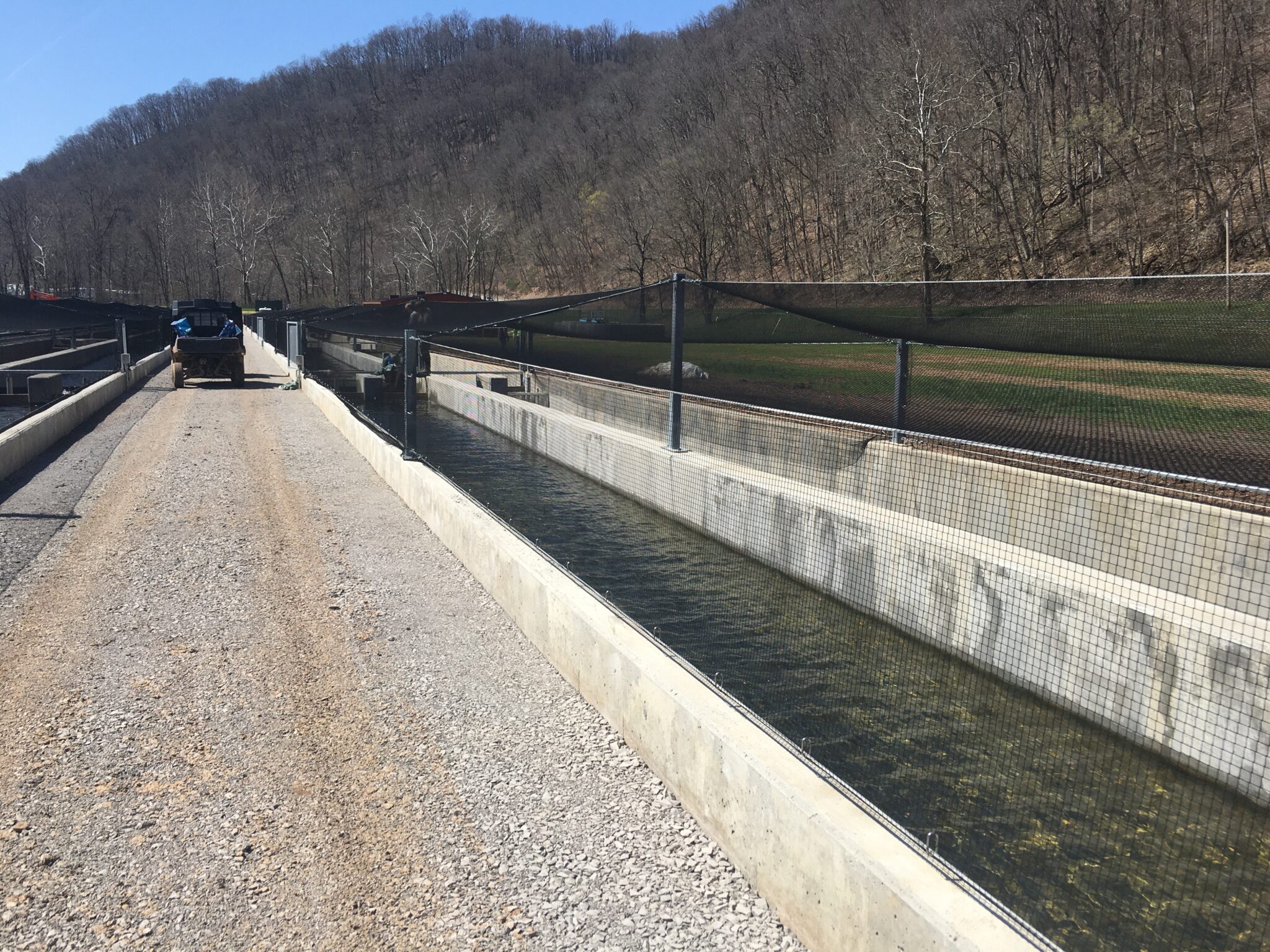 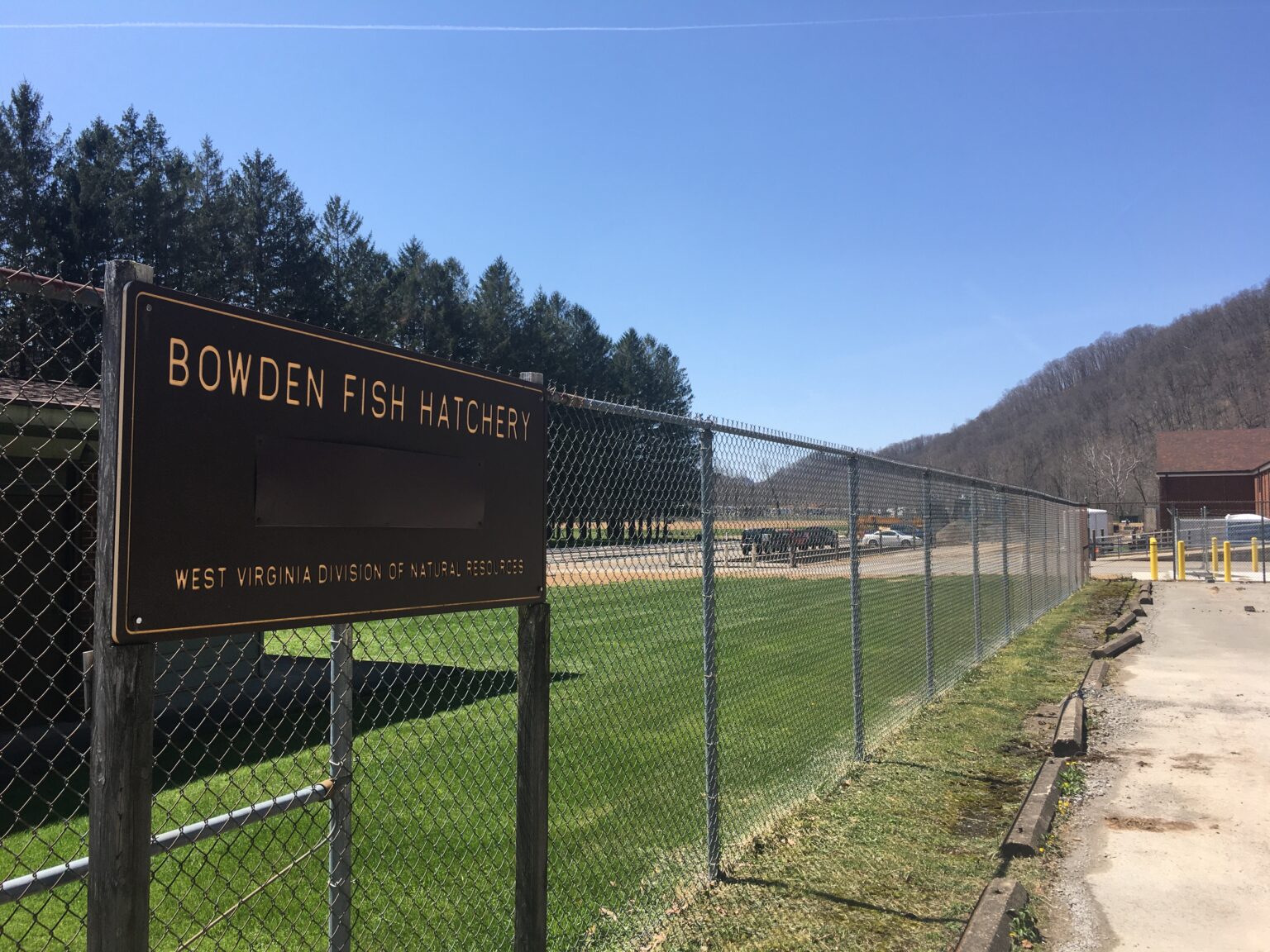 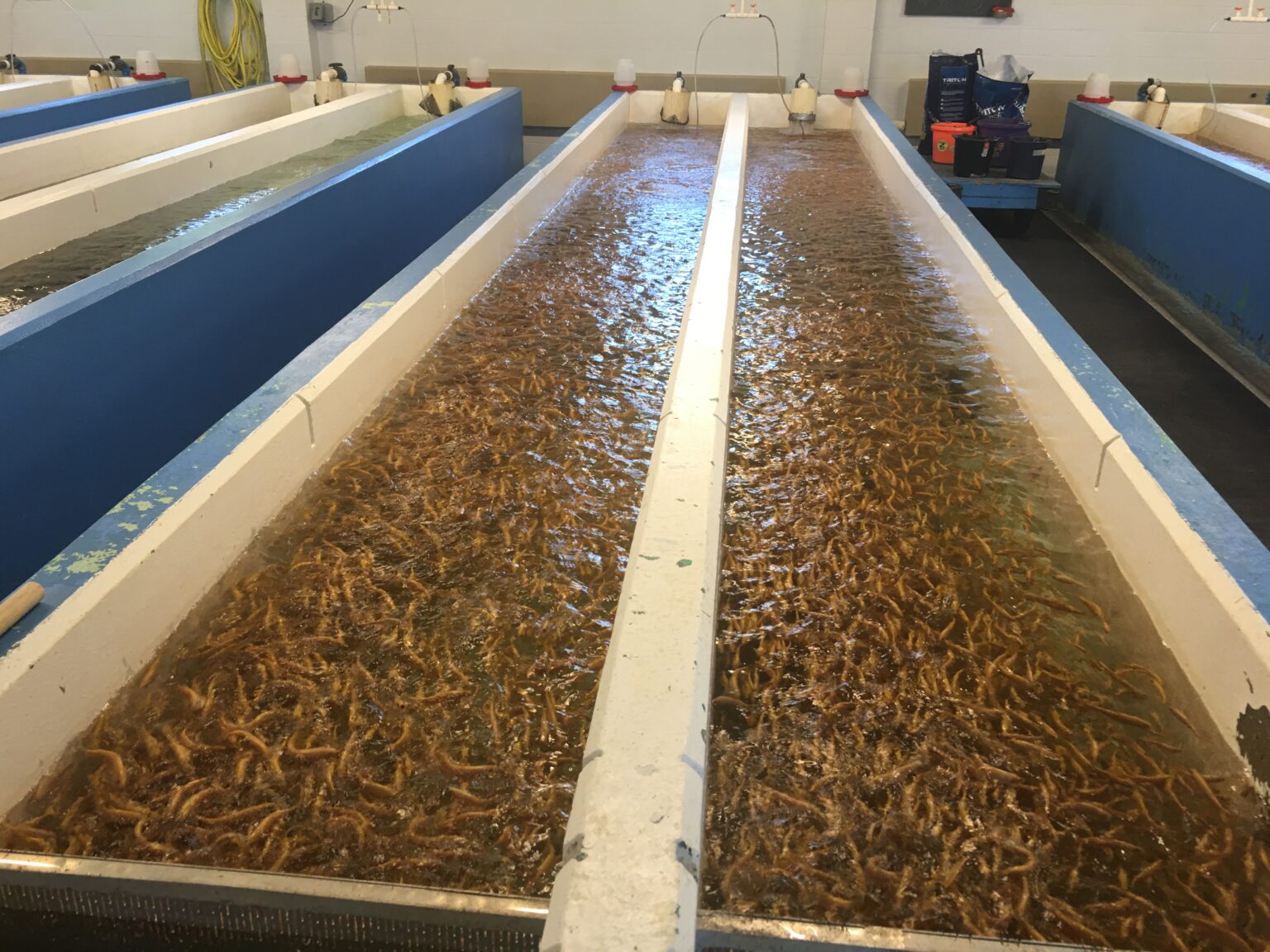 Fingerling golden trout in the indoor raceways of the nursery at Bowden. 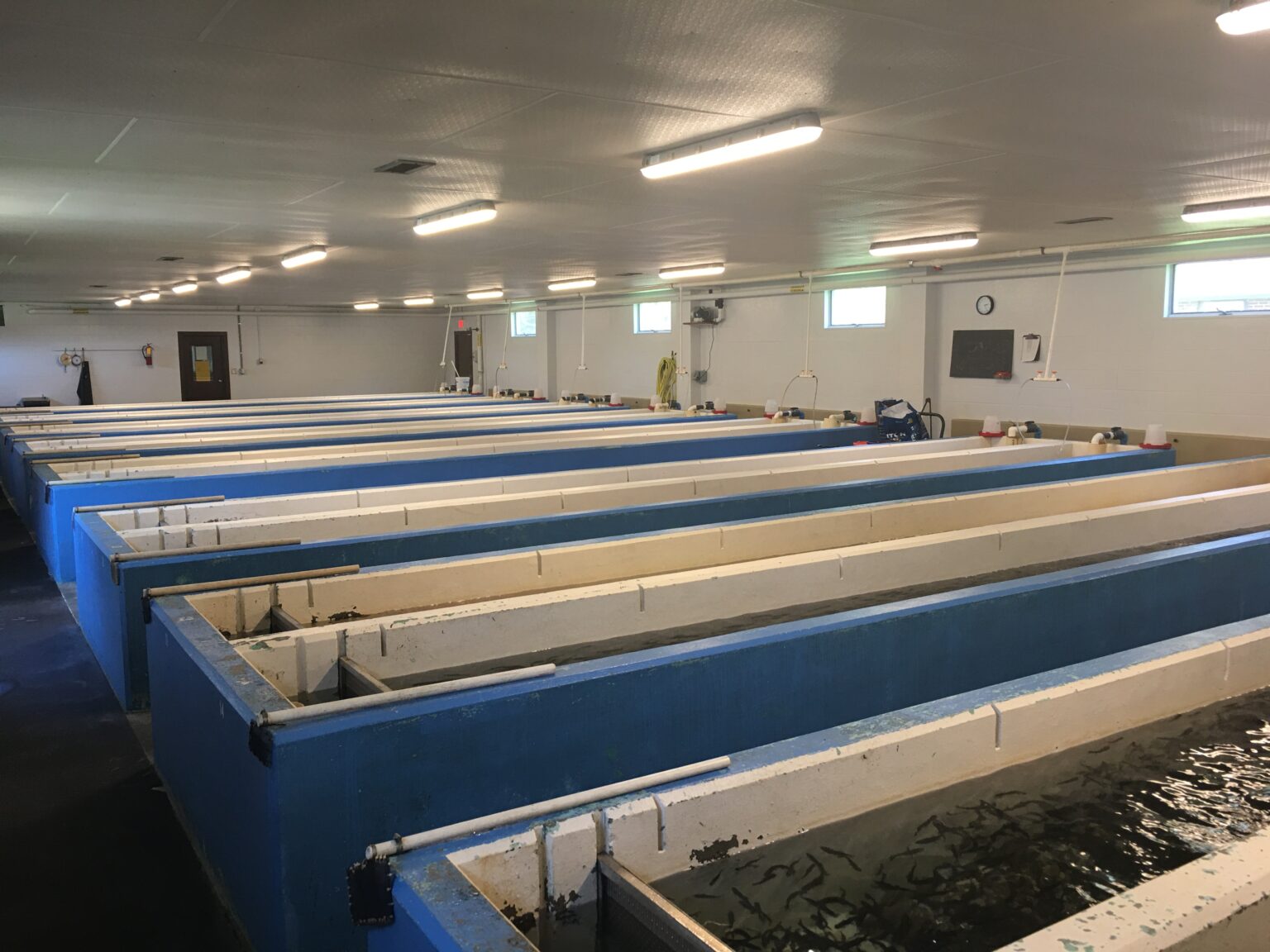 The nursery at the hatchery has received improved lighting and an interior paint job which was much needed. 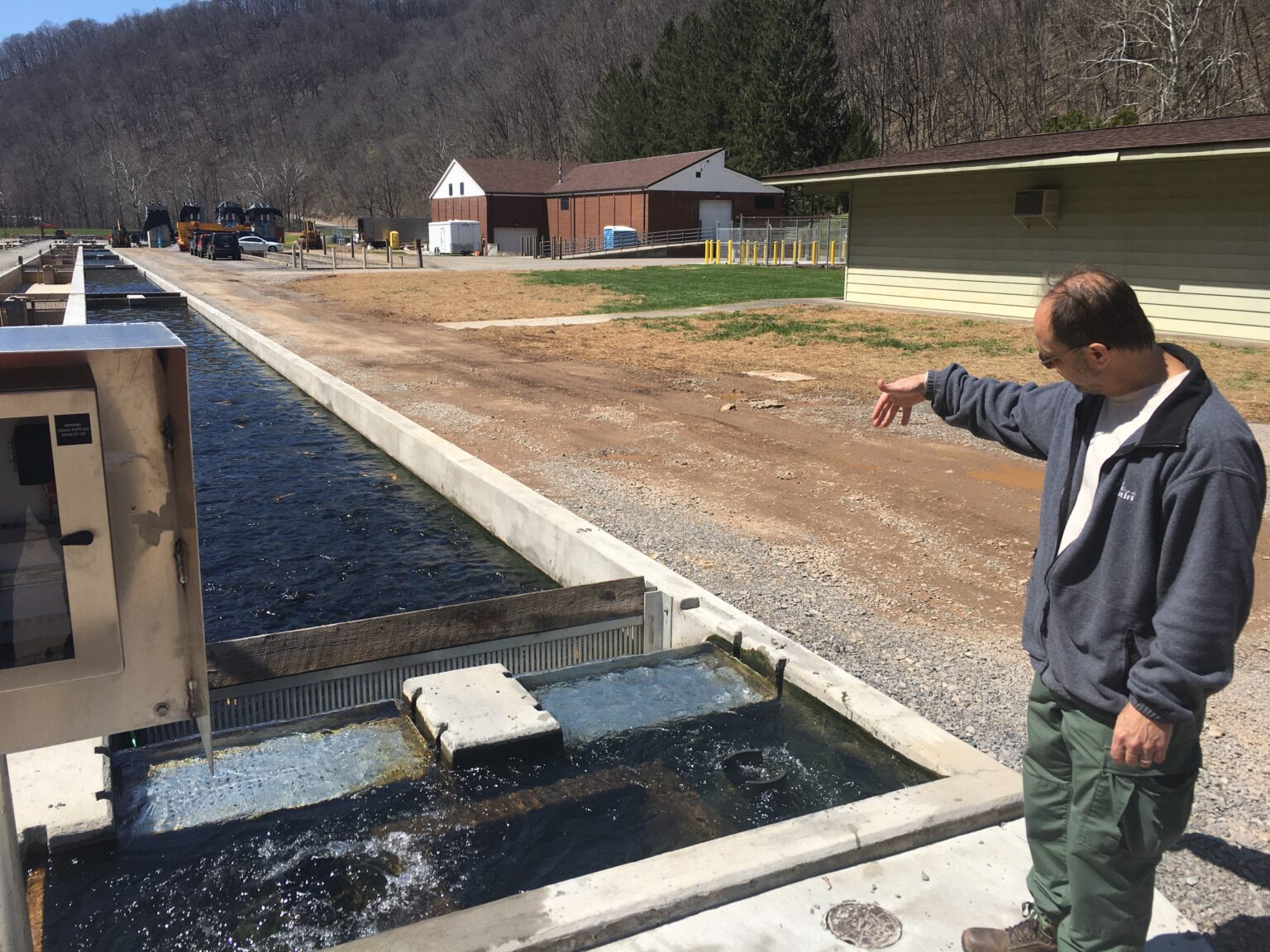 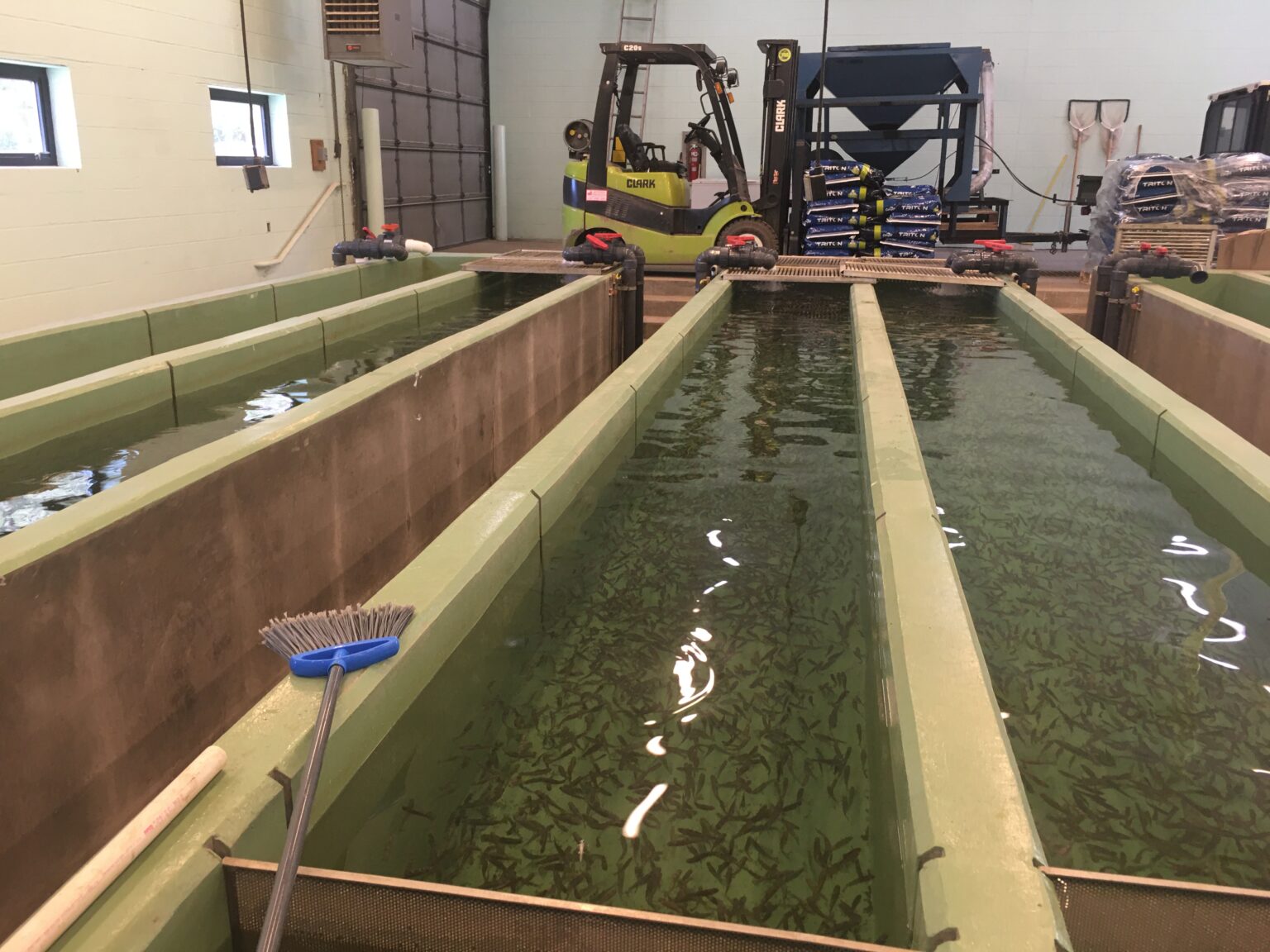 An indoor raceway in the second building on the hatchery grounds. The increased water capacity thanks to a modern recirculation system will enable these facilities to be used for the first time since the state took over the hatchery in 1997. 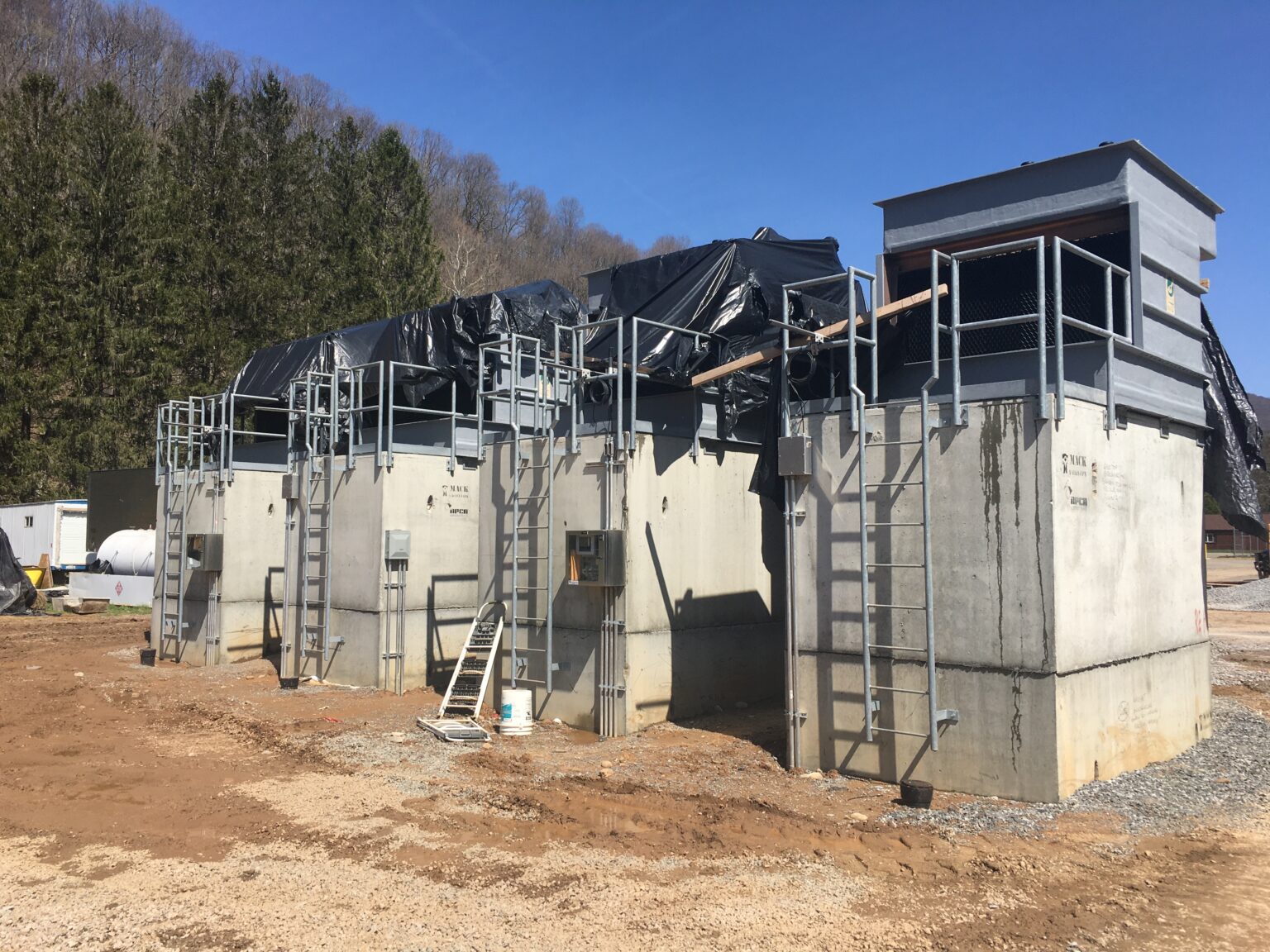 Degassing towers will help remove CO2, Nitrogen, and other gases from the water as part of the recirculation process. 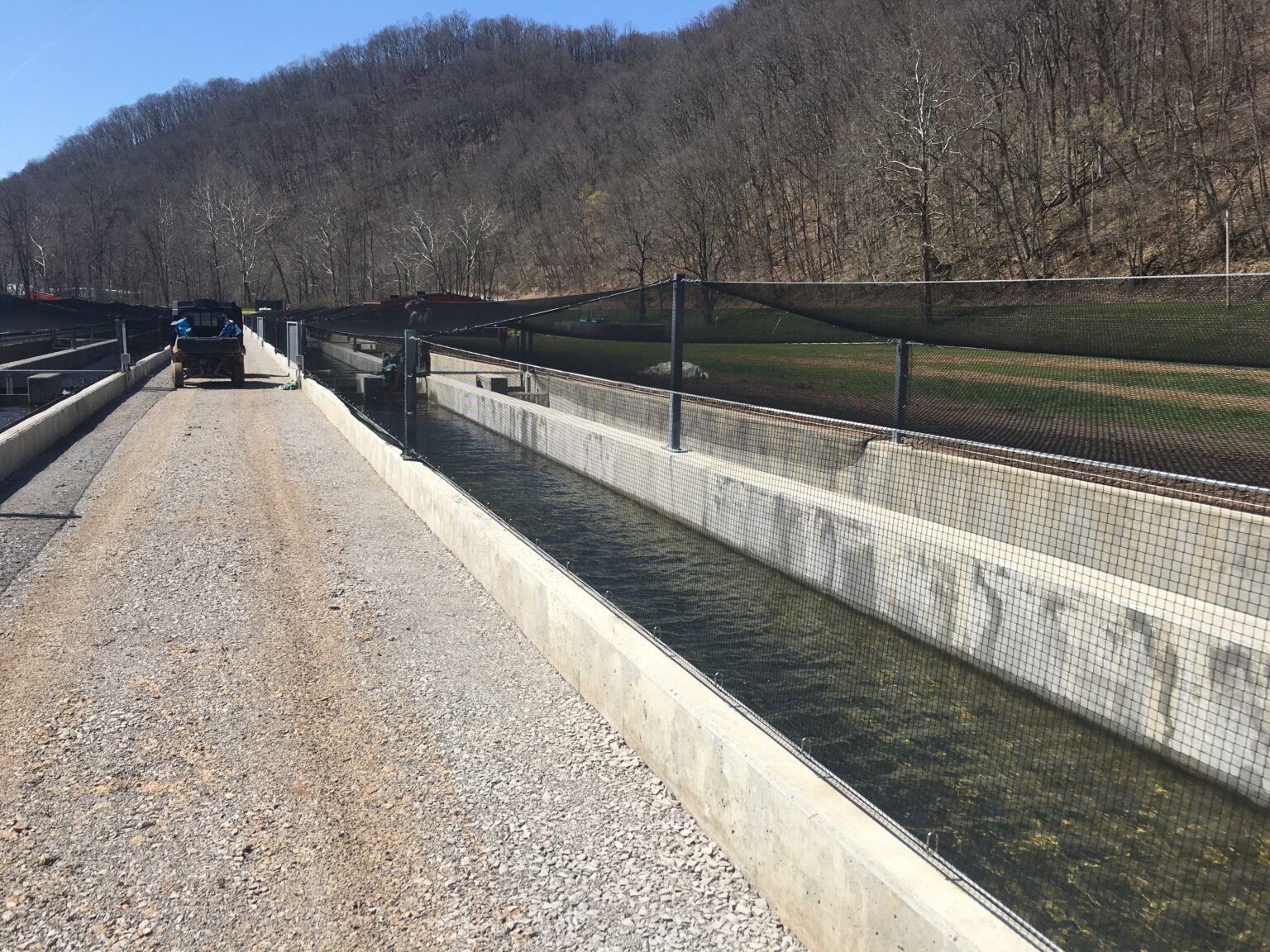 The old raceways have been resurfaced and smoothed. 20 new raceways have also been constructed to increase storage by 50 percent. 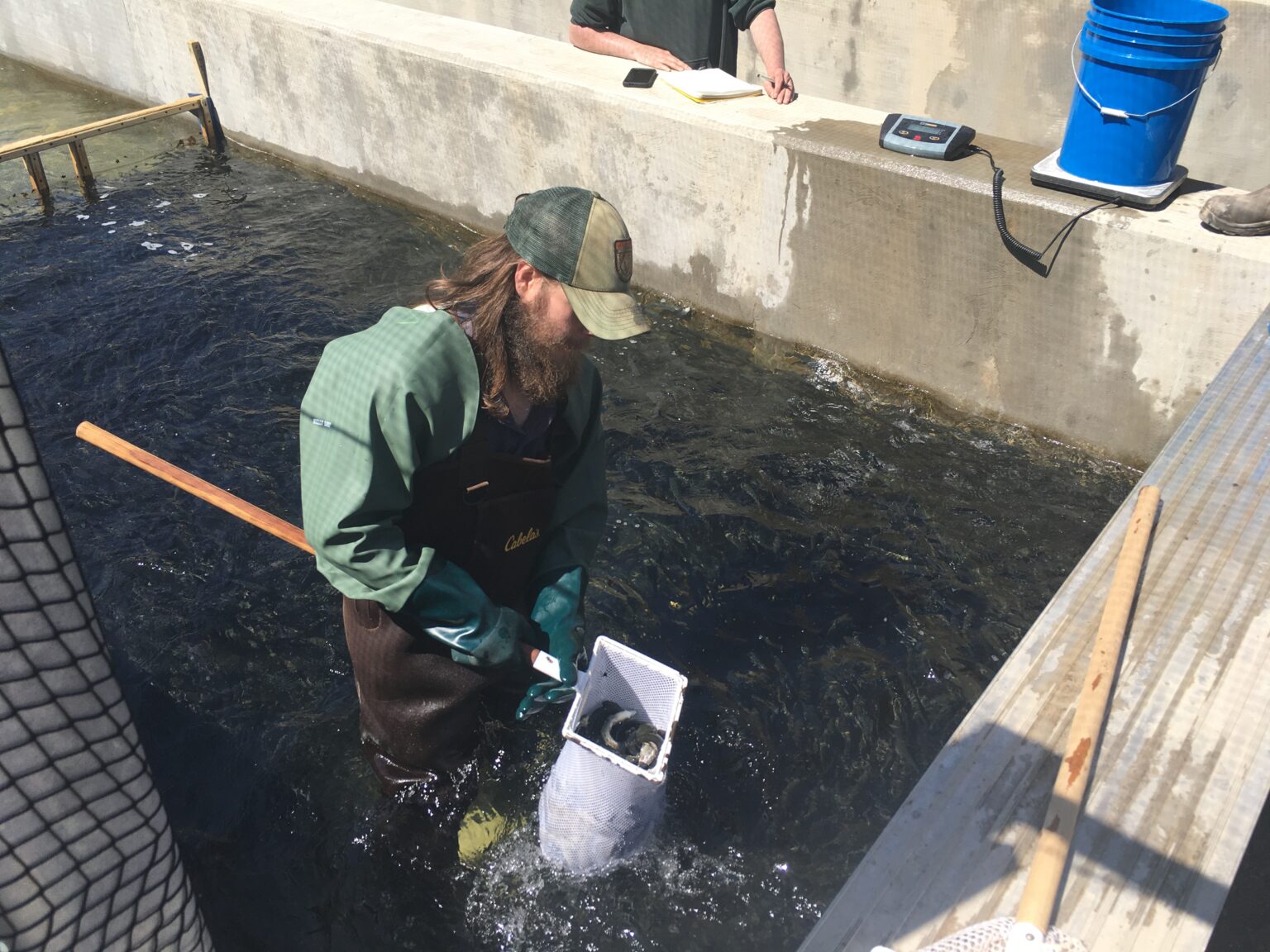 Hatchery personnel work in the new raceways moving fish from one compartment to another. 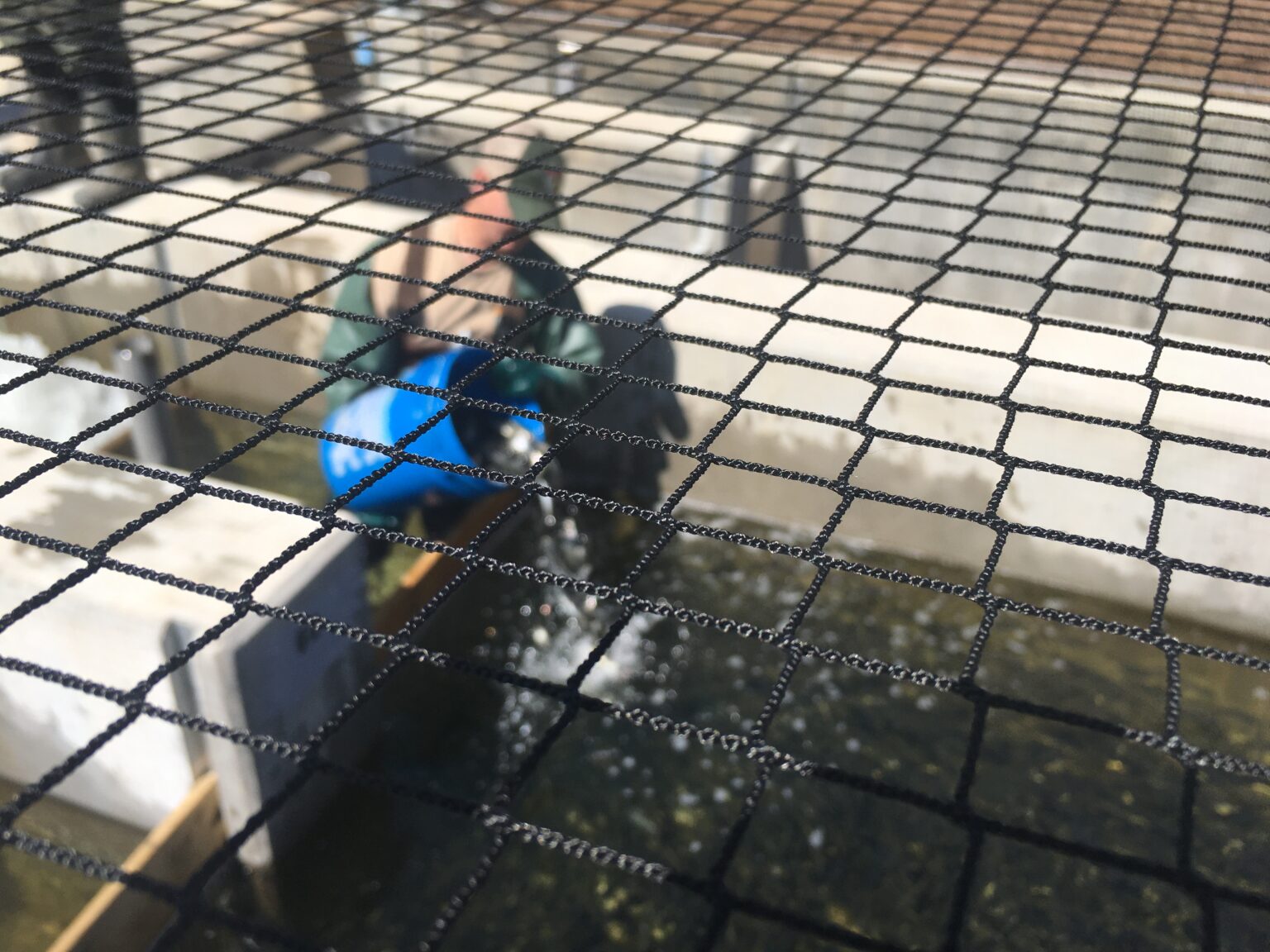 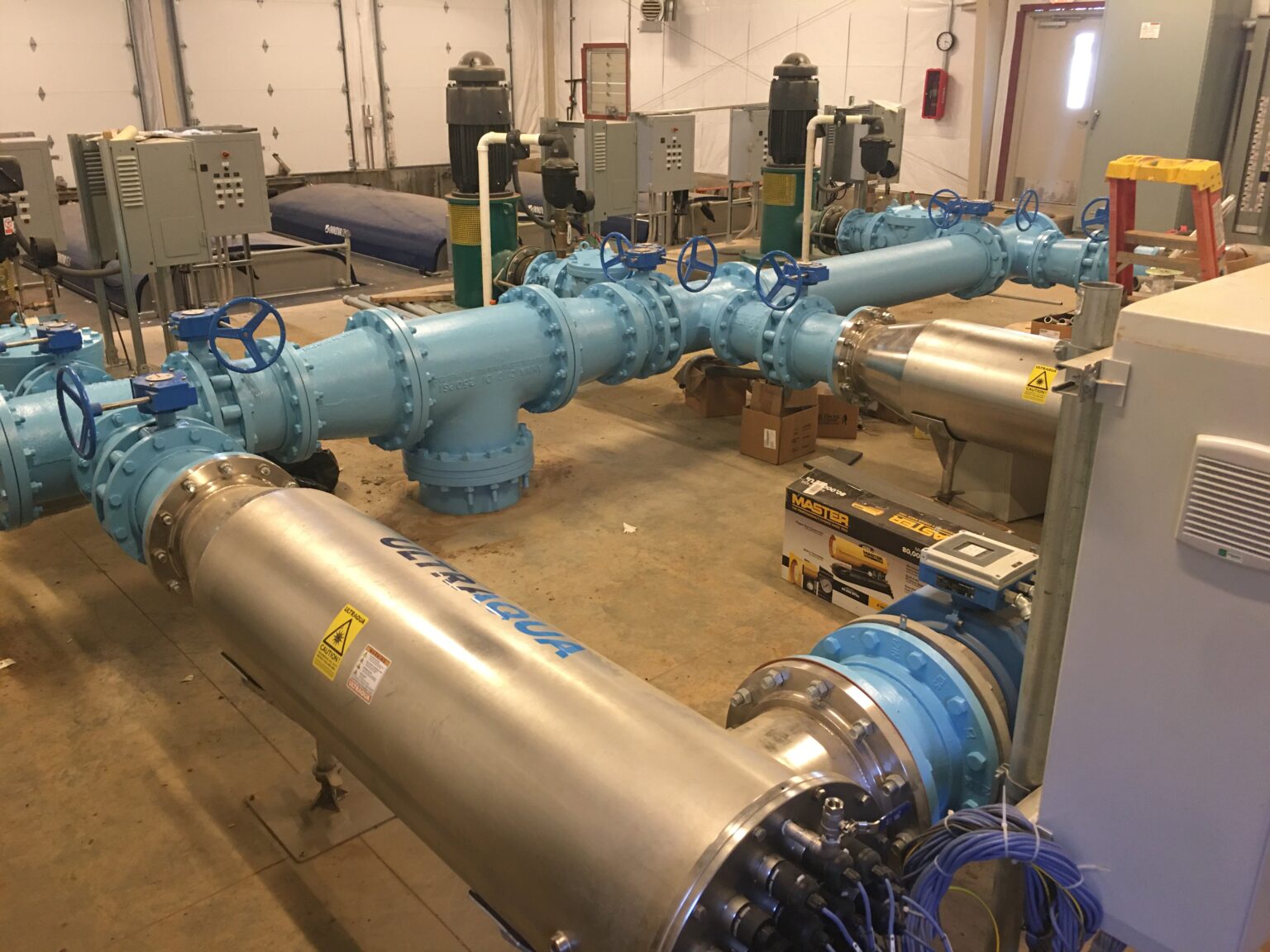 One of the massive infrared units used to kill bacteria in the water's recirculation system. 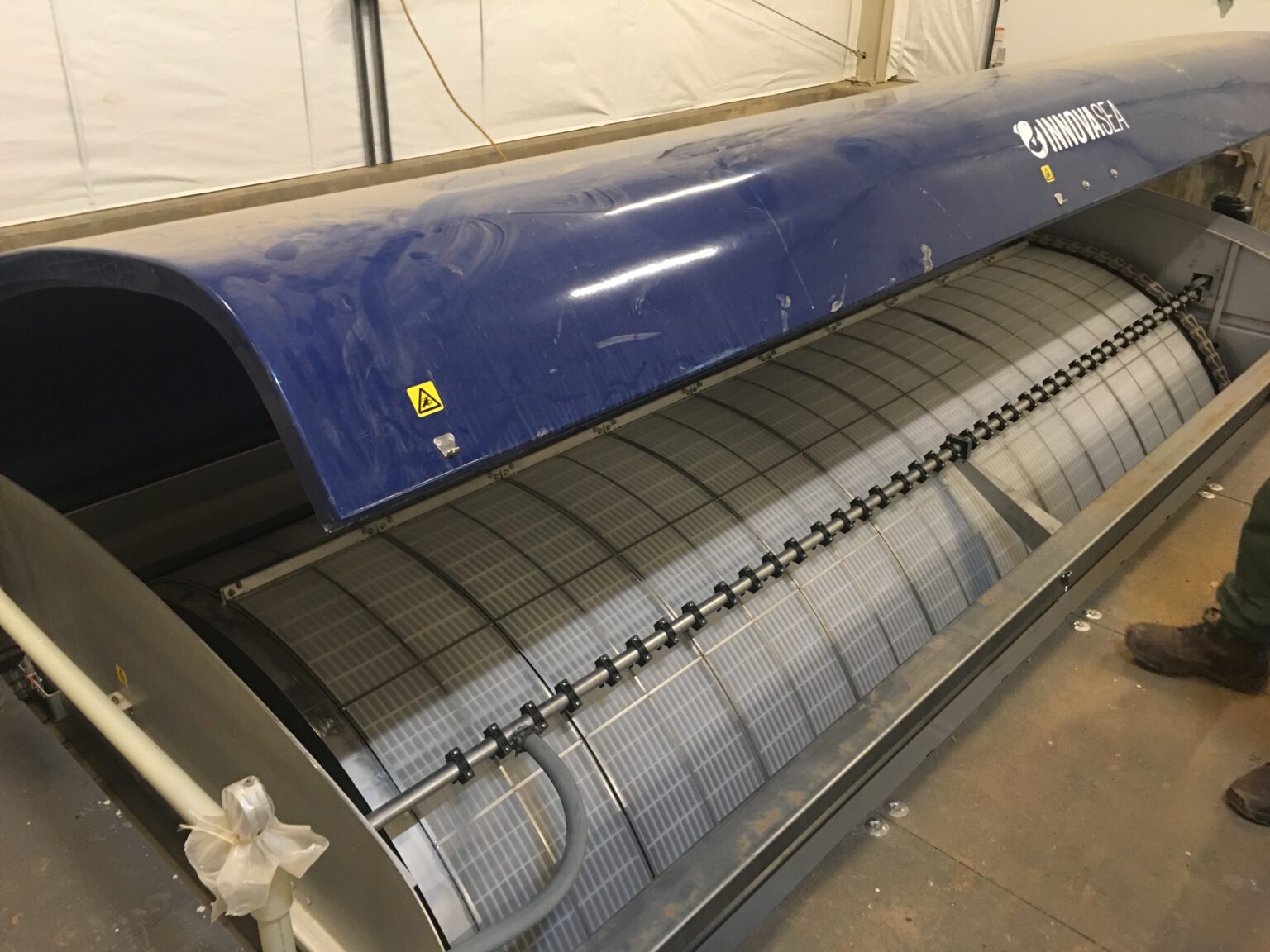 One of four drums which churn the water after it has made a pass through the hatchery to remove solid contaminants. 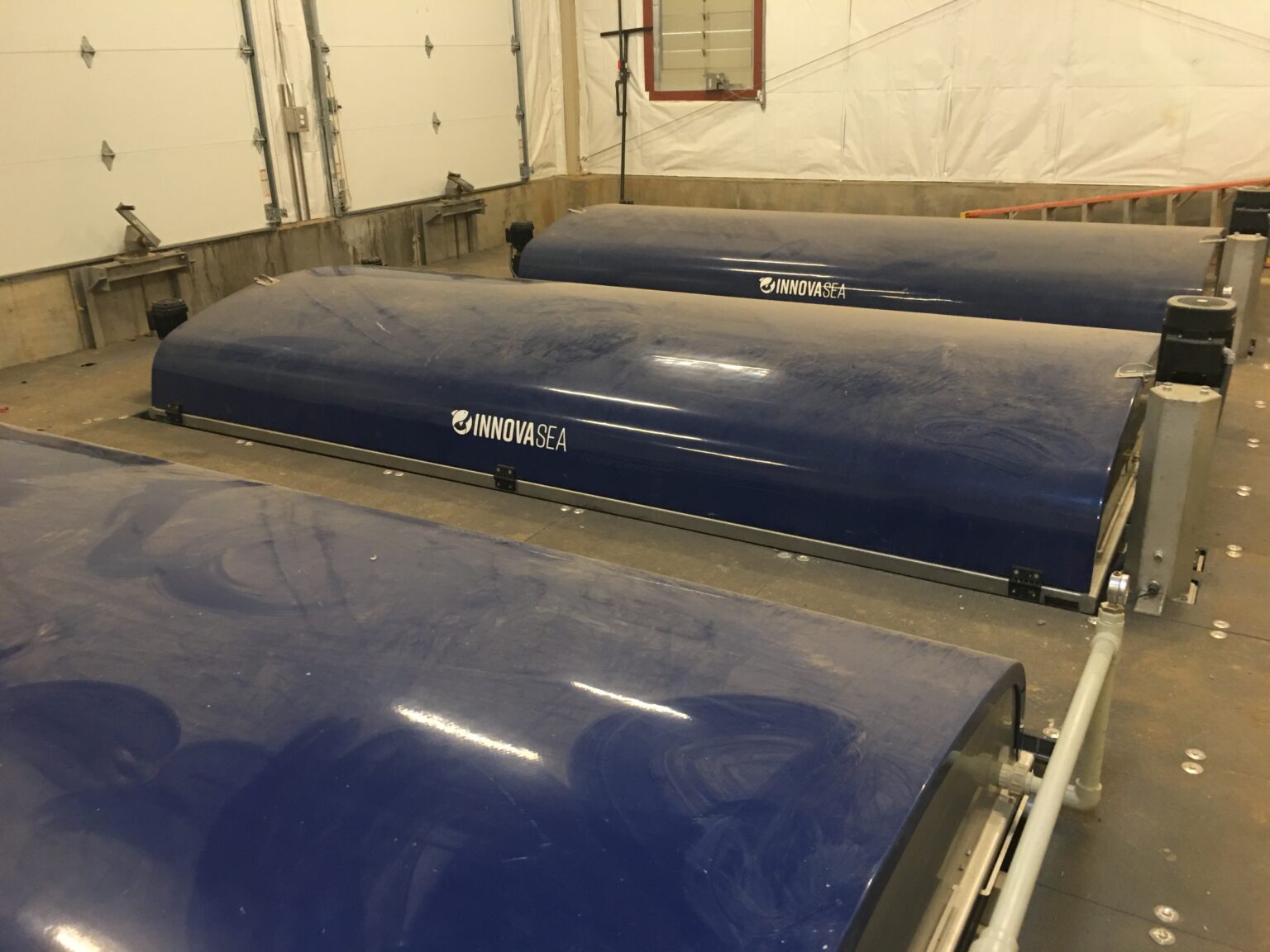 There are four of the solid waste removal units. 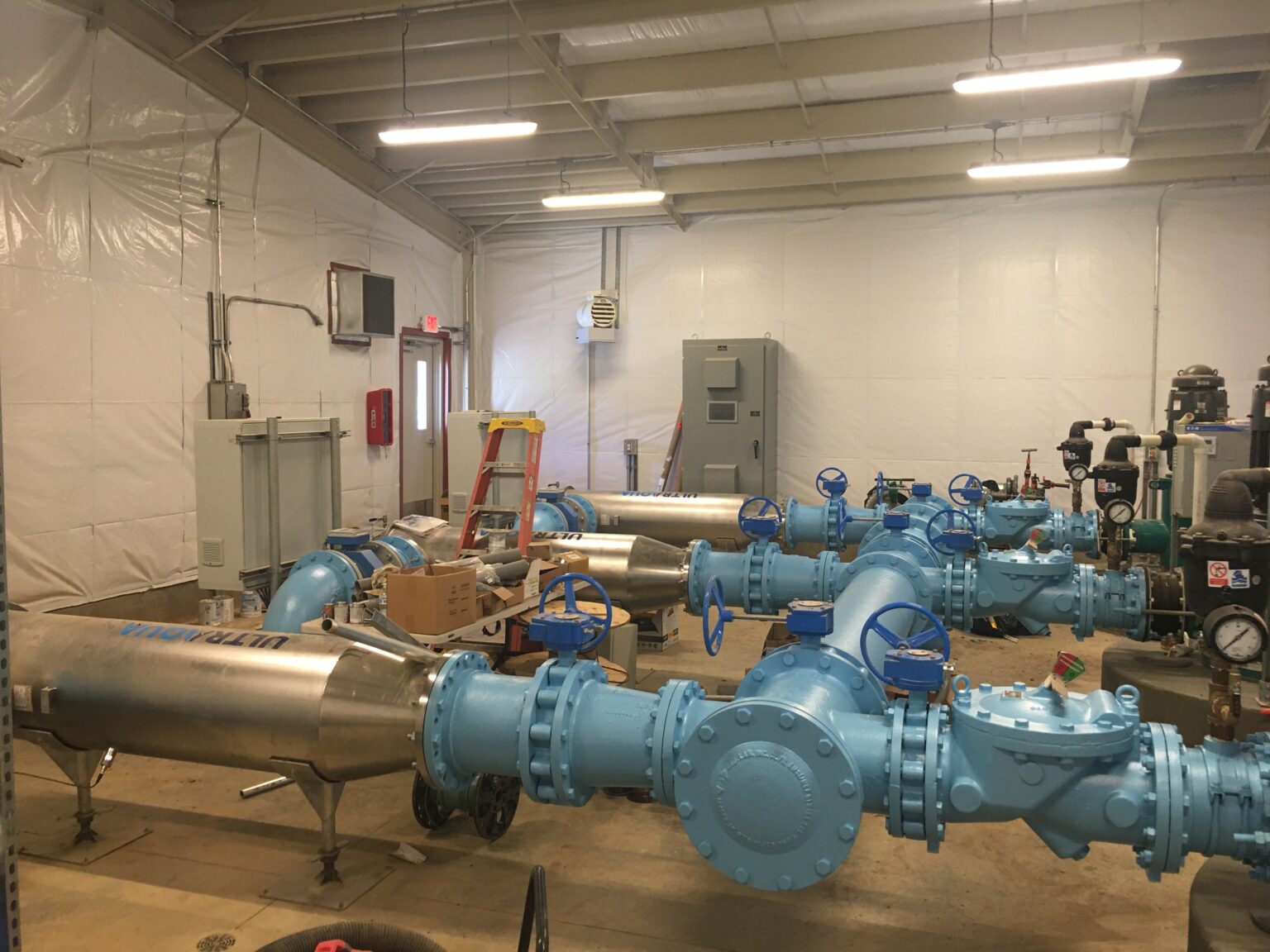 The state of the art recirculation system is housed in a brand new building on the lower end of the hatchery grounds.

BOWDEN, W.Va. — One of the state’s most productive trout hatcheries will soon be even more productive. A multi-Million dollar makeover for the Bowden Fish Hatchery in Randolph County is due to be complete by this summer. Once fully operational, the new facility will be state of the art and include amenities which will maximize fish production for stocking public waters in the Mountain State.

The facility was built in the early 1960’s and was operated by the U.S. Fish and Wildlife Service until 1997. The West Virginia Division of Natural Resources took over management that year. The facility has had no real upgrades since it was first constructed.

Jim Hedrick heads up operations for the state’s hatchery systems and said the first change to the system will be to eliminate water from the Shavers Fork River into the hatchery and instead two major mountain springs nearby will provide the water for the operation. The water from those two springs will be maximized with a modern recirculation system.

“That water is better quality than the river. It maintains a year-round more stable temperature and it eliminates a lot of major disease concerns,” Hedrick said in an interview for West Virginia Outdoors.

Although better quality and more consistent temperatures, the water does not have the oxygen content which comes with the river water. Hedrick said that will be remedied with an on-site oxygen circulation system.

“We’ll install a 30 foot tall liquid oxygen tank which will be refilled monthly. That oxygen will be inserted into the raceways and every level through the hatchery to add oxygen to the water,” he said.

Although not used, a valve remains in place to return the river water to the hatchery in cases of drought or low water concerns.

Water will initially enter the hatchery through the nursery, which most folks have never seen. Infrared filtration will purify water before it flows into the indoor raceways where trout eggs are hatched and fry spent their first days. The area has had a much needed upgrade with improved lighting fixtures and a coat of paint. An infrared purification system is also installed to remove bacteria and potential disease.

The water’s next stop will be the raceways where trout are kept in various stages of growth after they leave the nursery. Those familiar with the hatchery will notice many changes to the raceways. The original raceways had become pitted with the acidic water from Shavers Fork through the years.

“The raceways were pitted and waste products and bacteria were harboring there. A resurfacing smoothed those back out and made those cleaner. It was a major maintenance issue that needed resolved after all these years,” Hedrick explained.

Bowden originally had 40 raceways, those have been resurfaced and 20 more have been built on the lower end of the property. The move created 50 percent more carrying capacity of fish. The newest raceways are covered with a net aimed at deterring predators on the fingerling sized fish.

“They are still very small and they’re susceptible to a lot of predators. Under that netting, it keeps predators not only from taking the fish, but also keeps predators from contaminating the raceway and potentially spreading disease,” he explained.

Four large concrete towers stand at the end of the new raceways. They’re “gassing” towers which forces water to fall and helps remove carbon-dioxide, nitrogen, and other built up gasses from the water after it has worked through the hatchery system. From those towers water goes into a massive filtration system housed in a new building on the hatchery grounds. Inside the building, four massive drums filter the water and churn it to allow all solid waste to settle out before it is pumped through massive ultraviolet purifying cylinders. The water will reenter the system for a second circulation or be forced out through the overflow to the river, cleaner than whet it entered the hatchery.

The upgrades will also allow hatchery staff to activate another set of indoor raceways in the second building to help increase capacity.

“We’ve never been able to operate those since we took over the hatchery because we never had the adequate water supply. Now we do,” Hedrick said.

Construction should be finished by late May or early June. Production at the hatchery continued throughout the process, but it has been closed to the public during the construction phase.

“It is not the same place. When it does reopen, I would invite people to come and visit,” Hedrick said. “It’s a complete makeover of the system which makes it better, increases production, and keeps us up with modern times.”

The estimated price tag for the upgrades and repairs is $10 to $12 Million.