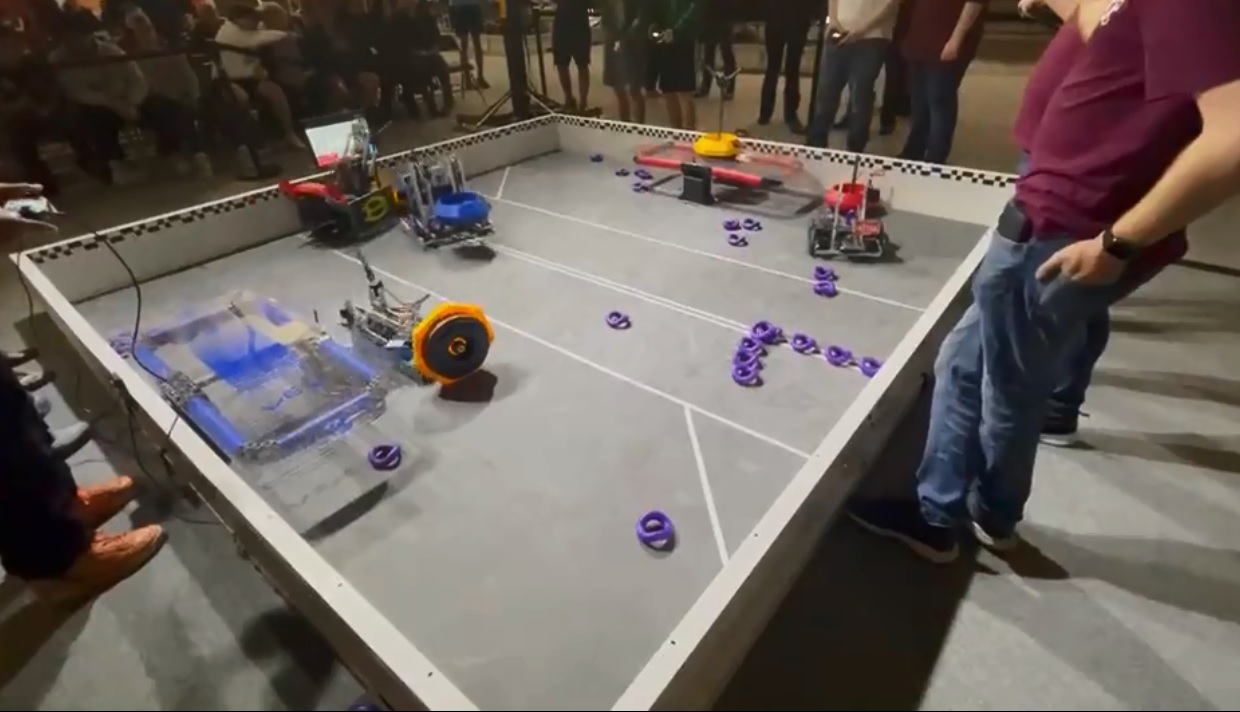 After an full day of competition at Fairmont State University, Parkersburg High School, the 12-seed, earned the first-ever title with a win over Wheeling Park. Teams from Capital High and Brooke High were also in the finals.

“It’s a competition, they’re competing hard,” West Virginia SSAC Executive Director Bernie Dolan told MetroNews earlier Monday. “You watch them it’s pretty intense out there and we’re excited to have them to be a part of the WVSSAC.”

Planning to hold the event at Fairmont State began about three years ago, according to President Mirta Martin.

“Robots do not have integrity or honor- humanity does,” Martin said. “So, part of having these competitions is instilling in our students a sense of right and wrong.”

All WVSSAC-affiliated schools can compete with no qualification event or requirement. Teams of students from multiple grade levels design, build and troubleshoot their robot. Teams compete against the clock to complete or successfully repeat a specific task, or in some cases points are awarded for obstructing another team.

I was blown away by #WV students’ skills and creativity at the @WVSSAC Robotics State Championship today at @FairmontState. This #STEM program is truly a showcase for what our students can achieve. They are truly the Rocket Boys and Girls of the 21st Century! pic.twitter.com/EEqIJqSDoe

The teams are made up of students from multiple grades and areas of expertise designed to compliment each other. Each team requires people with mechanical skills/knowledge, technical ability, hand/eye coordination and math skills.

Capito noted each team member has a role that is vital to the performance of the whole.

“This is attractive to kids all of the state because everybody can participate,” Capito said.

It’s up to the student team to design the robot from the ground up- power source, mobility and tools for the system to enable it to complete the specified task.

During his remarks Manchin told the students the skills they are learning will play a major role in the development and application of advanced technology that will have a major influence on our economy.

“These are problem solvers- these kids are learning how to work as a team to solve a problem that can be very challenging,” Manchin said. “This is really what it takes, in any endeavor in life you’re going to have to work as a team.”

Morgan was born in Morgantown, a graduate of the West Point Military Academy and veteran of Army Special Operation forces has served in Iraq, Afghanistan and Africa. In 2019, Morgan served as the flight engineer of a mission that was to last six months. However, that mission was extended to nine months and Morgan completed seven space walks lasting more than 45 hours- a record for a single American space flight.

“I represented many things and one of those was the state of West Virginia being born in Morgantown,” Morgan said. “It really warms my heart to see that so many of our legislators here in West Virginia are investing in our students at this age.”