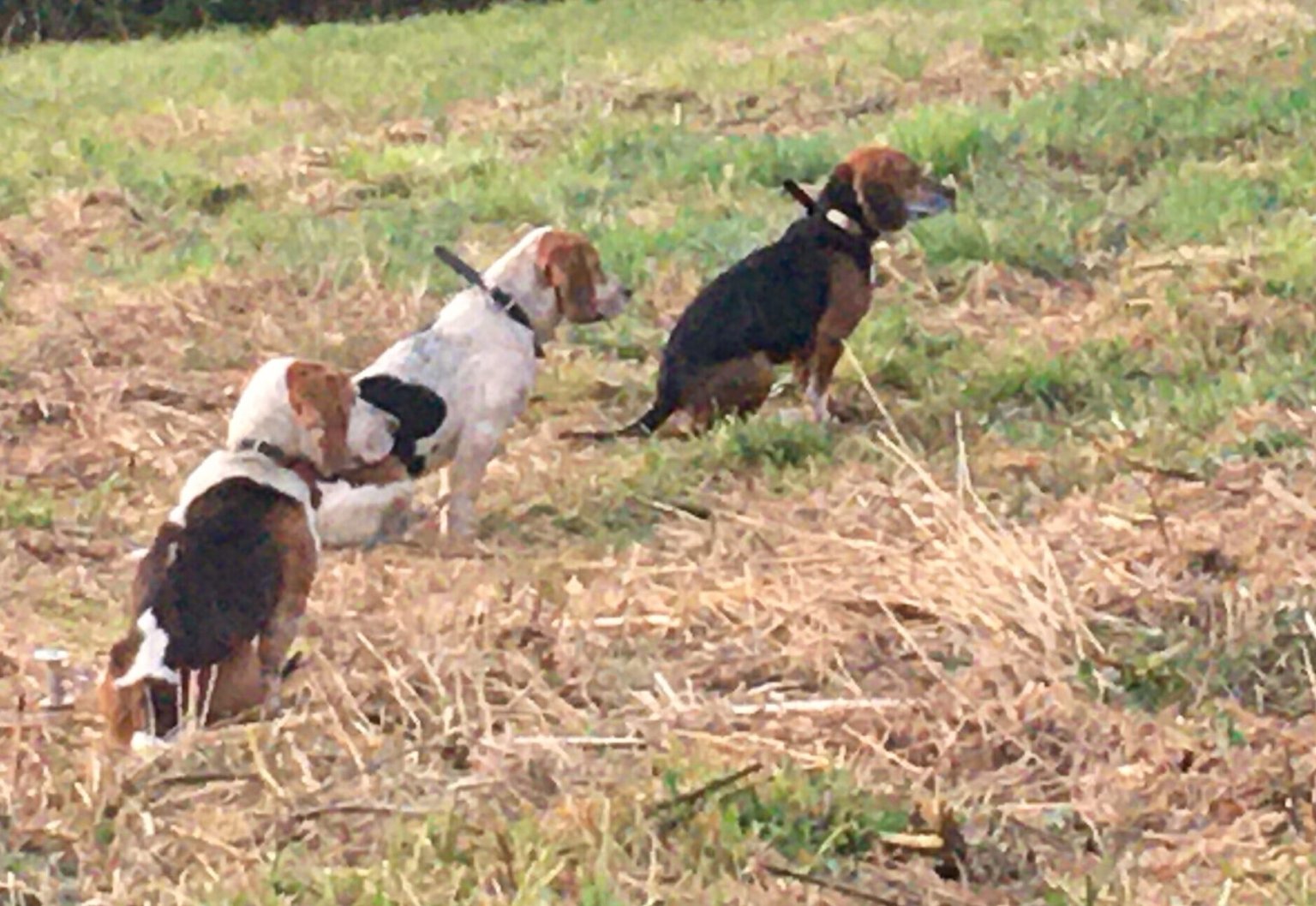 The Southern West Virginia Beagle Club in Putnam County is one of the largest and oldest clubs in the Mountain State.

Judges use a device to carefully and accurately measure the height of each dog to determine which division it will compete in.

Dogs are fitted with identical, but different colored collars, and turned loose to hunt together in a field trial. Reaction to each other is as important as how they react to the rabbit.

"Rattlesnake Ridge Storm", a beagle from Mississippi was in the competition at the Robert C. Byrd Lock and Dam. He came into the trial with six wins and 25 points shy of being a finished champion.

Owners line up their dogs for a "winners pack" and prepare for the final hunt in the competition after the field was narrowed in previous hunts to the final nine dogs.

PLINY, W.Va. — Beagles sat silently as their owners talked in low tones among one another, drank coffee, and watched the sun rise on Putnam County. Soon the official walked out to do a roll call, introduce judges, and announce where each of the two separate classes would go for the Southern West Virginia Beagle Club’s semi-annual field trial.

Dog owners had travelled from near and far to participate in the semi-annual event. Tim Griffin from Big Creek, Mississippi stood by with his dog, Rattlesnake Ridge Storm on a leash waiting to turn his champion loose.

“He’ll be three in August and he lacks about 25 points being a field champion. He’s got six wins and won the Mid-South Gun Dog Championship. He’s got a couple of large pack wins and he’s just an all around, in my opinion, of what it takes to win,” Griffin said.

Listen to “Tim Griffin of Big Creek, MS” on Spreaker.

Griffin is one of many who travels across the country each weekend putting his dogs up against the best of the best. Other owners from Kentucky, Maryland, and even as far away as Michigan had dogs entered into the West Virginia competition the third weekend in April.

“It’s as much for the camaraderie of the people we know and meet,” said Rob Fuller who drove in from Michigan. “I was a pretty avid rabbit hunter and did a lot of jump shooting, but in Michigan there’s not a ton of game. A buddy introduced me to his dog and it took off from there and it has become a lifestyle,”

Listen to “Rob Fuller of Michigan” on Spreaker.

The event was sanctioned under AKC rules, meaning there were two classes of beagles, the large class in which dogs stood 13 to 15 inches and the small class where all were under 13 inches. Each was carefully measured to insure in which class they would compete.

One group met up on a brushy stretch of land near the Winfield Lock and Dam in Putnam County. The other division competed on a piece of overgrown, flat river bottom near the Robert C. Byrd Lock and Dam on the Ohio River in Mason County.

The dogs, fitted with separate color collars to identify them, were unleashed in a pack and started hunting. It wasn’t long before a rabbit track was struck and the baying and howling was at full volume. Tails wagging and noses glued to the ground each of the hounds instinctively pushed forward on the rabbit’s trail. The quarry was well ahead of his pursuers and wasn’t making it easy as he zig-zagged back and forth across a service road in the middle of the property where the owners milled about to observe their dogs.

“They’re looking for scores. What dogs can handle the pack, handle the rabbit, run closest to the rabbit’s line and run the way the rule book says,” explained Jon Gibeaut a club member who was merely observing and helping to coordinate the event.

Listen to “Jon Gibeaut” on Spreaker.

Alongside the dogs moved some fleet footed young guys, beating the brush and carefully watching the activity of each animal. I learned being a judge is a young man’s game. It didn’t take long for the dogs to move well out of site and eventually out of ear shot in the dense cover. We moved further into the overgrown lot and another howl rang out, signaling the next strike was made and another chase was on.

Beagles live to run a rabbit. Some, do it better than others. Gibeaut explained what was considered the gold standard for a good dog.

“One that doesn’t get rattled with pressure from other dogs. You’ve got nine dogs running, you want one that will stay true to the line and stay with the rabbit he’s after,” he explained.

Near the howling a shot rang out, which was somewhat concerning since it’s not rabbit season. Gibeaut explained the shot was fired from a starter’s pistol simulating a hunting situation to make sure the dogs weren’t impacted by gunfire. A gun shy hunting dog isn’t going to be a very effective hunting dog.

The only West Virginian in the field on the day was Bobby Taylor, President off the Southern West Virginia Beagle Club. He had a couple of dogs in the class running at the Robert C. Byrd Lock and Dam property. Taylor is a strong believer in the right bloodline to create a champion.

“It didn’t take me long after getting into this to figure out the key to having good dogs is having a good bloodline and maintaining that good bloodline so you have consistency. Then when you have a cross you know what you’re going to get,” he said.

Taylor has 30 dogs in his kennel, routinely breeds his dogs for the right bloodline and is maintaining a blood line from a dog that died 25 to 30 years ago. He’s also dedicated to the sport with a 20 acre training ground near his home in Teays Valley. His dogs workout several times a week and he spends a lot of his weekend’s putting them into competition.

It’s without question an expensive hobby, but for those who’ve made the investment and live the lifestyle they wouldn’t want it any other way.

“I’ve been as far as Louisiana, to New York, and all over the Midwest,” Fuller explained. “We just love it.”

Outdoors
Illegal pet trade creates major threat to some W.Va. wildlife
Critters like box turtles and snakes from the hills of West Virginia are drawing big money in the foreign pet trade and poachers are starting to impact West Virginia's wildlife with illegal capture and collection
By Chris Lawrence
Outdoors
Virginia angler lands a new W.Va. state record channel catfish
Allen Burkett of Broadway, Va. caught the monster at South Mill Creek Lake in Grant County June 20th.
By Chris Lawrence
Outdoors
Elk calves for 2022 are showing up on the Tomblin WMA
Elk project leader Randy Kelly said it's hard to say with any certainty just how many calves are out there.
By Chris Lawrence
Outdoors
Tour de Coal weekend is underway
Group celebrates 19 years of the event which has grown into one of the largest of its kind in America.
By Chris Lawrence
View AllHoppy's Commentary