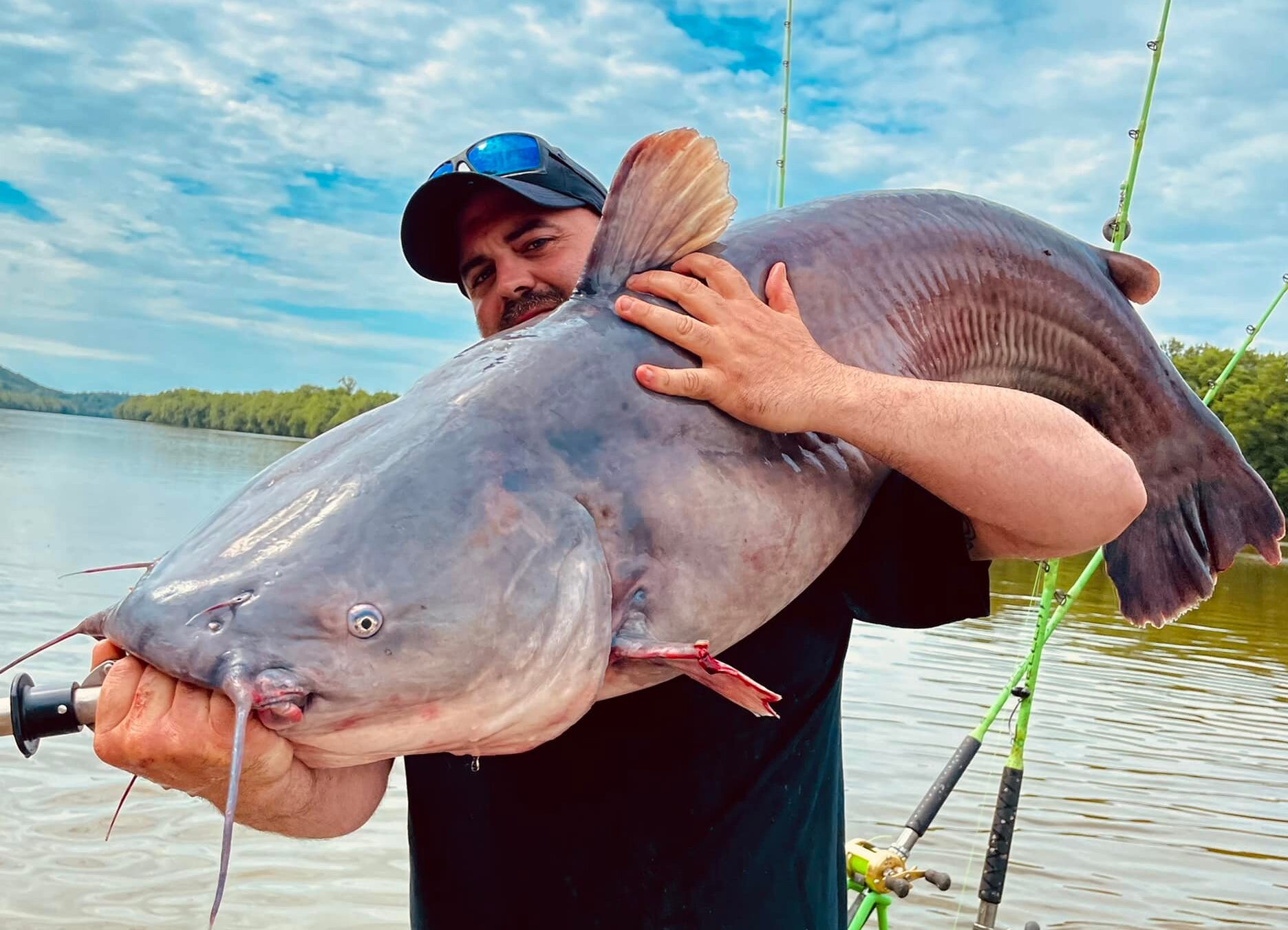 LEON, W.Va. — A Wednesday morning  on the water turned out to be an epic adventure for an Ohio angler on the Kanawha River in West Virginia.

Steven Price, of Lancaster, Ohio, anchored up on a spot between Point Pleasant and the Winfield Lock and Dam where he has had success hunting for big catfish. He started his day with rods baited up with cut shad around 7:30 a.m.

“About 10 minutes into the trip my rod bent all the way over the back of the boat. Four or five minutes into the fight I’m thinking this thing is 40 to 50 pounds. But he turned and went right into the structure and got me hung up,” he told MetroNews.

It was a disappointment and Price admitted he didn’t expect he would hook up with one that big again. But, it was early and he was on the water so he rebaited and cast his lines back into the water to see what would happen. In about 15 minutes, Deja-vu.

“The rod goes down on the back of the boat, I pick it up and it’s another big one. He came up and rolled and I got him into the boat and that fish was 56 pounds. I was thinking man what a day!” he explained.

The standing record for a blue catfish at that moment in time was 59.74 pounds, a fish caught a little over a month ago further up the Kanawha River by Cody Carver.

“I was all excited and calling all of my buddies and telling them this may be the biggest fish I catch all year, well low and behold, about 10 minutes later another rod goes down,” he said.

As Yogi Berra would say, it was Deja-vu all over again.

“I see a boil about 60 feet behind the boat and I see his tail come up out of the water and I think, ‘Holy Moly I got another big one,” said Price.

But this one was different. It was even bigger and it was fighting hard. Price’s net handle was disconnected from the net after the first big fish and the net is the only easy way to get a big one into the boat. He was fishing alone and the fish on the line was giving him all he could handle.

Another record blue catfish caught today in the Kanawha River….for both weight and length. The old record for weight stood barely a over month. pic.twitter.com/Yp0PZJfJxr

When the big fish surfaced near the boat and Price laid eyes on him, it was another blue catfish and it was a monster.

“That first was 56 pounds and it was close to the record, I was thinking this might really be the record. It really set in when I went to lift it up over the side of the boat I remember thinking this is a really, really heavy fish,” he said.

He got the second monster in the boat and when he hooked it to his scales it pushed up over 70 pounds.

“I set him down and said, that’s definitely the state record,” he laughed.


He started making phone calls and eventually a friend put him in touch with West Virginia DNR Biologist Ryan Bosserman, who incidentally was the one who certified the last record just over a month ago. Price’s big catfish tipped the scales at 67.22 pounds. The fish also set a new record for length at 50.7 inches. caught by Justin Goode in the Ohio River in 2021.

After the records were certified and pictures taken, the big catfish was turned loose back into the river alive and well.

“You can’t ask for a better trip, days like that are what we dream about,” said Price.