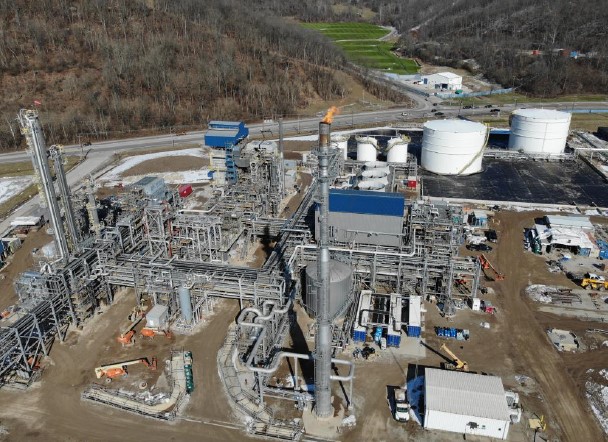 US Methanol Plant in Institute, W.Va.

INSTITUTE, W.Va. — The construction of a new methanol plant in the Kanawha Valley is nearing completion. Officials with US Methanol said as they start to ramp up their rebuilt facility in the coming days, neighbors will notice some unusual activity.

“We’re doing commissioning and as a result there’s going to be a large flame very visible at the plant’s flare,” said Angi Hyre, Human Resources director for the company.

Hyre said the flame is actually a safety feature and may burn large at times and small at other times. According to Hyre, neither is of any concern. She added the facility will also ramp up steam production in the weeks ahead and the process will be noisy.

“There’s going to be some steam venting. That might be heard from within the plant and in areas surrounding the plant,” she said.

The venting noise will greatly subside once production begins. The plant has been rebuilt after it was brought to West Virginia from South America. According to Hyre, the operations should be fully transitioned from construction to production by month’s end.

“We are anticipating the end of the second quarter. We’re looking at that late June, early July time frame,” she said.

The startup process not only involved bringing systems on line and conducting tests. Hyre said they are also rounding out the plant’s work force and are still looking for help.

“We are still hiring. We have about 52 employees right now and are in the process of hiring the final four to six and maybe eight people. We expect to be about about 60 people when fully staffed,” she said.

Interviews are underway and anybody wanting to apply can submit a resume to info@usmeoh.com.  Hyre said they are specifically looking for operators and maintenance employees.