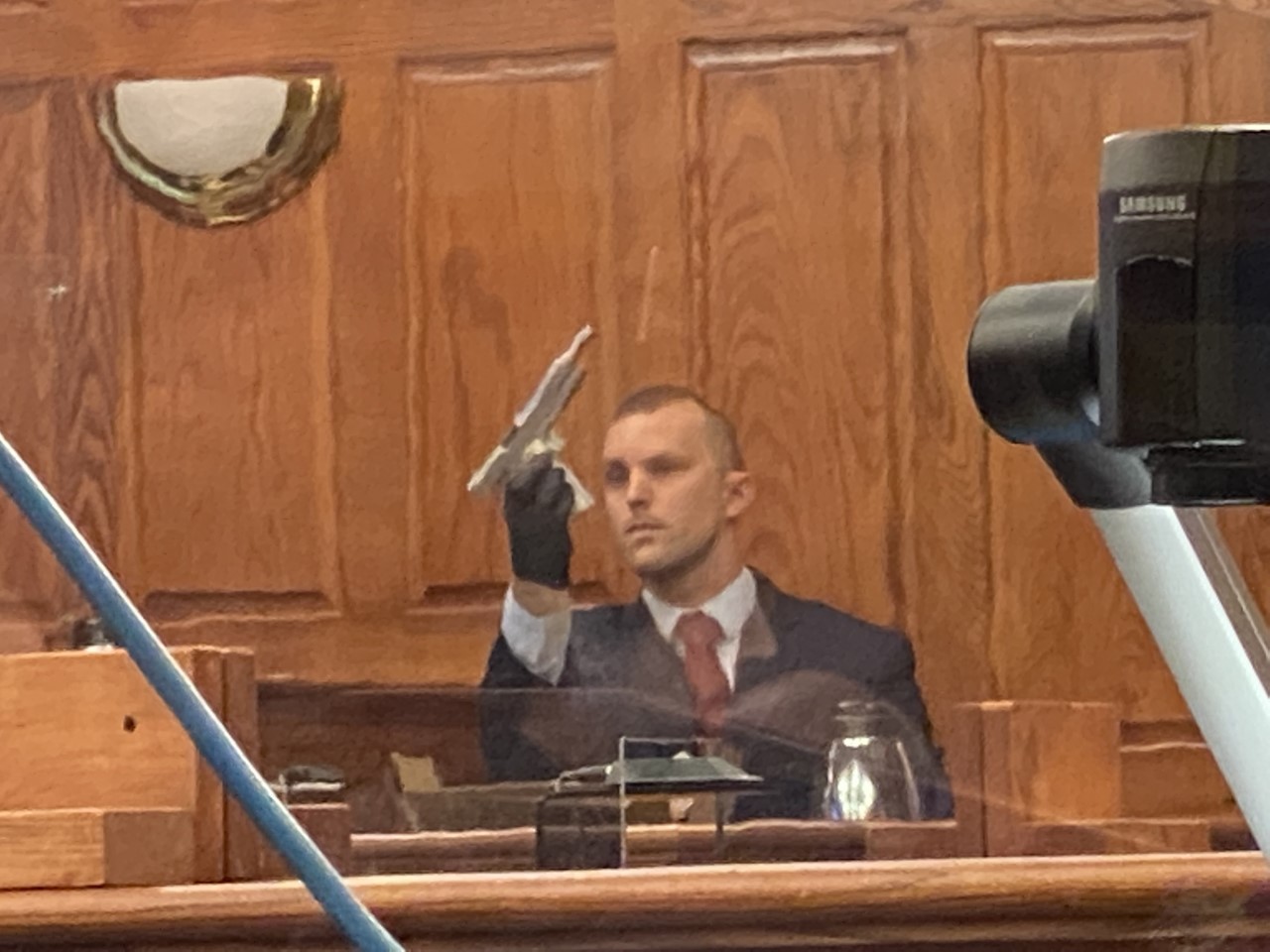 CHARLESTON, W.Va. — Jury members in the Joshua Phillips murder trial viewed dash cam and body cam video from Charleston Police Officer Cassie Johnson that led up to the moment where Johnson and Phillips both shot at each other, while in court Tuesday.

During afternoon testimony on day two of the trial on Tuesday, the 12-member jury, Johnson’s family and friends, and others in the Kanawha County courtroom witnessed the scuffle between Phillips and Johnson on Garrison Avenue on Dec. 1, 2020. Johnson was shot during the altercation and died two days later at the hospital.

Phillips is on trial for first-degree murder in connection with Johnson’s death. He also faces a charge of drug possession with intent to deliver. Phillips was also shot in the altercation and is claiming self-defense.

The body cam footage, presented by the state, showed Johnson responding to a parking complaint call on Garrison Avenue. She approached a red Dodge Durango, which was Phillips’ vehicle. A neighbor had called for police because the Durango was parked on their property.

Johnson is then seen knocking on the door of a home saying it is Charleston Police Department while asking the owner of the Durango to come outside and move the car. She also said that if the car wasn’t moved, she would ‘start a tow truck.’

The body cam footage further showed Johnson having a conversation with a woman who answered the door to the house, asking “What were you all stashing?” Johnson then left the home as Phillips comes out. Phillips identified himself as Josh Phillips after Johnson asked for his name.

“What were you doing in that house,” Johnson asked Phillips, as Phillips replied “I was bringing them soda and stuff.”

Johnson replied, “Do you have anything on you that I need to know about? Because I know what goes on in that house.”

“What goes on in that house,” Phillips asked Johnson.

“I’m not stupid. Everybody and their brother comes in and out of the front door. I know what goes on in there,” she said.

Phillips then sat down in the driver seat of the Durango with the door opened, as he and Johnson argue about the parking situation, the footage showed. Their tones escalated quickly about the situation. Johnson asked Phillips again if he had something on him she needed to know about, and then asked Phillips to stop pulling stuff out of his pockets and turning away from her.

Phillips’ gun in his waistband became visible in the video as Johnson tried to restrain him. Following the video being played, Cpl. Chris Lioi with Charleston Police Department was on the witness stand describing screenshots of the video. He said Phillips was in possession of a 1911 handgun.

Lioi went on to describe the video to the jury, “This is Mr. Phillips with his left hand on the holster and hand of Officer Johnson, preventing her from drawing her firearm.”

The struggle between Johnson and Phillips continued for a few seconds as Johnson called for backup. Johnson told Phillips to put his hands behind his back or he’s ‘going on the ground.’ Phillips screamed ‘stop it now’ several times before the audio cut off, but the camera kept rolling. The camera fades to dark as Johnson fell to the ground.

Cpl. Chris Lioi with the Charleston Police Department is now on the stand. The dash cam and body cam footage is now being shown to the jury. @WVMetroNews

Also in the afternoon portion of the trial, Marshall Sharp, who has since pleaded guilty to a drug charge in connection with the case, took the stand. Richard Chapman, who lived in the Garrison Avenue home that Phillips exited, was on the witness stand. He entered a plea agreement in Kanawha County on a drug charge and also pleaded guilty to a methamphetamine charge in Putnam County.

In the Tuesday morning session of the trial, jury members heard from several Charleston police officers including one who recovered the gun used to kill Johnson.

Former Charleston Police Detective Joshua McMaster showed the jury a stainless steel firearm and magazine he recovered from Garrison Avenue on the day Johnson was shot.

“It appeared to be in good condition. I believe the slide was locked back,” McMaster said before he held the gun up for the court to view.

The state is focusing on the evidence collected at the crime scene and then on drugs located in Phillips’ pants pocket.

Charleston Police Detective Adam Kuhner testified he pulled a number of pills from Phillips’ jeans that were covered in blood.

“A bag of blue pills was located in the change pocket of his pants,” Kuhner said.

Defense attorney John Sullivan told the jury during opening statements Monday they are working to prove Phillips was not a drug dealer.

Body camera footage worn by Charleston Police Cpl. Brandon Rinehart was presented to the jury Tuesday morning. The video showed police “kicking and striking” Phillips as he resisted arrest. Rinehart told the jury he was “very emotional” at the time, but that officers pinned Phillips down to gain more control as a police tactic.

“Typically when you have such non-compliance, you would place someone on the ground so you have better control of them and, at that point, we had zero compliance,” Rinehart said.

Charleston Police Sgt. Greg Lucas testified that Johnson was wearing body camera during the altercation and that her camera was shut off at some point. He emphasized Johnson did not turn the camera off on her own.

“At some point during the contact, the camera had been hit and turned off, so the camera was fully activated,” Lucas said.

CPD Sgt. Greg Lucas is testifying that Officer Johnson’s body camera was hit and turned off at some point. He emphasizes Johnson did not turn her camera off on her own. pic.twitter.com/yNA04n5gf4

The state has been moving quickly through a list of witnesses. Prosecutors had called more than 10 witnesses since Monday including Charleston resident Michael Oesterreicher who provided cell phone video of the scene showing Johnson laying face down in the ground after being shot.

Johnson’s family members have been in the front row of the courtroom listening to testimony, at times, consoling each other as they wipe away tears.

Sullivan said during opening statements Phillips acted “in fear” and that he was defending himself. Oesterreicher testified he saw Phillips pull his gun first before Johnson could get to her weapon.

Oesterreicher also testified he heard Johnson tell Phillips “don’t do this, don’t do this,” adding her voice sounded “scared, yet authoritative.”