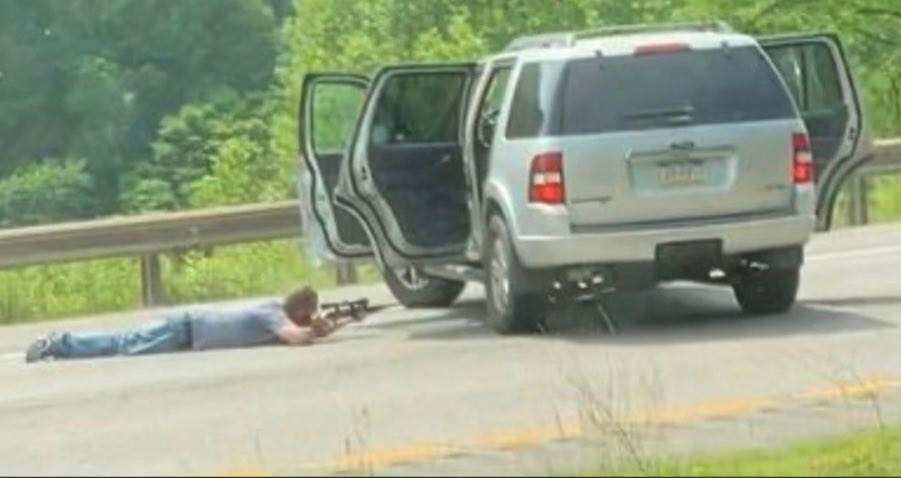 Limited communication with the shooter and passing motorists indicated he was largely out to shoot police in his stand. PHOTO: Jeff Shelosky

WESTON, W.Va. — Lewis County Sheriff Dave Gosa believes a gunman, identified as Matthew Brevosky, 38, of Grindstone, Pa., who stopped in the middle of I-79 and started shooting randomly with a rifle had plans to target law enforcement.

Gosa and his Chief Deputy Mike Cayton were the first to arrive at the Weston exit of I-79 where the man had pulled his vehicle sideways in the northbound lanes blocking traffic and firing from a prone position from under his SUV.

“There was a truck driver up there when we got on scene who talked to him and we saw him throw up his hands and asked if it was okay to leave, the guy said, ‘If you’re not law enforcement, you better get out of here,'” said the Sheriff.


Gosa and his deputy tried to establish a rapport with  Brevosky , but he was having none of it.

“We tried to engage the subject in conversation and as soon as we did that he started shooting at us,” the sheriff explained.

During the gunfire, Upshur County Chief Deputy Mike Coffman was hit, Gosa became emotional as he described working his way to the wounded deputy while under fire.

“I rushed back to him and picked him up and shoved him back into his cruiser. There was a citizen on scene there, a fireman from Upshur County named Derek Long. He drove him to the hospital,” he said in a choked up voice.

Gosa also credited actions by Long to stop traffic on I-79 northbound which may have averted tragedy.

“He probably saved some lives because he was telling people to stop, get our of their vehicles, and take cover,” he said.

“We told them to stop because they almost drove right up on top of the subject. When they got on scene, he got up and came around to the side of the vehicle and that’s when the State Police and my Chief Deputy shot him,” he said.

State Police continue to process evidence from the scene and are forming a timeline. According to Gosa, they are trying to understand what may have caused Brevosky to take such action. The Sheriff admitted, it may be hard to know what was going through his mind.

“Not unless we can get to a family member who can give us a little bit of background about him,” he said.

Investigators were able to determine, through license plate readers, Brevosky had driven through a toll booth on the West Virginia Turnpike a couple of hours earlier headed north. But there is no indication why he decided to make a stand along the interstate near Weston.