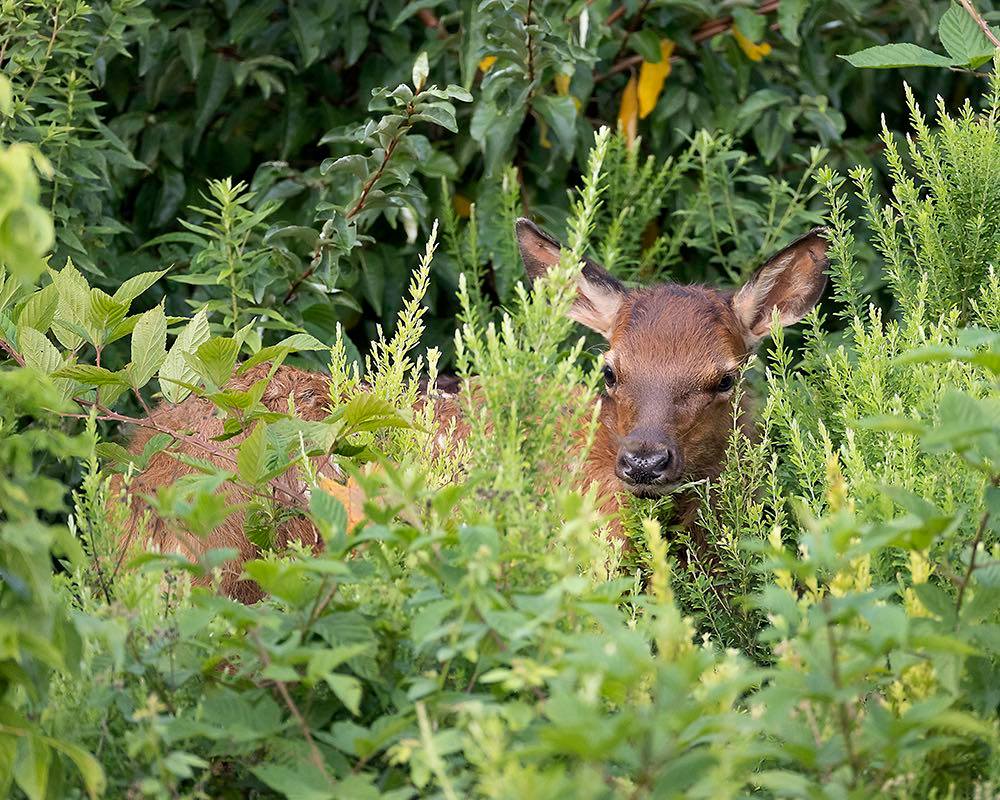 LOGAN, W.Va. — A wobbly legged ball of fur wandered through the grass almost taller than its back on the Earl Ray Tomblin Wildlife Management Area. Noticing the young elk calf wasn’t easy from a distance for photographer Mark Bias. Fortunately, the mother elk was close by to act as the bird dog.

It’s calving season in West Virginia’s elk country and the process may have several more weeks before it’s complete according to the West Virginia Division of Natural Resources Elk Project Leader Randy Kelly.

“It’s a little hard to count them and it’s not quite over yet. We’re still seeing a cow or two running around with a big belly,” said Kelly on a recent edition of West Virginia Outdoors.

Kelly keeps a sharp eye on the animals and their health, but even he admitted it’s hard to know exactly how many are out there and how many are dropping offspring.

“We know about how many mature cows we have that are capable of breeding. We know about what to expect, but it’s a little too early to say for sure, but we’d never get a total count for sure,” he said.

The elk program is entering a sixth calving season since the first West Virginia elk was born in the state after the reintroduction in 2016. Kelly said at this point the best they can do is estimate calf numbers. A year ago they estimated about 15 to 20. They were able to document 17 during the winter survey.

Natural reproduction is the only way the herd is expanding for the time being. Originally there were plans to bring elk into West Virginia from other states for a number of years, but the practice fell out of favor with the community of wildlife biologists who had serious concerns about the potential for spreading Chronic Wasting Disease. West Virginia was able to get the program off the ground in the nick of time.

“The move from Arizona was probably the last large group of cervids moved anywhere in the U.S.,” said Kelly.

The relationship with Arizona wildlife officials was intact and they were planning for another transfer until professional opinions changed.

“There were some guidelines put out that said let’s consider not moving cervids unless we have too and most states have taken that kind of approach, he said.

Kelly and other officials hope science and research will advance to the stage a live test for CWD can be developed. Until then, additional elk from other sources coming into West Virginia appears to be highly unlikely.

“If we ever get a live animal test we could get over that hump,” said Kelly.

Outdoors
Virginia angler lands a new W.Va. state record channel catfish
Allen Burkett of Broadway, Va. caught the monster at South Mill Creek Lake in Grant County June 20th.
By Chris Lawrence
Outdoors
Tour de Coal weekend is underway
Group celebrates 19 years of the event which has grown into one of the largest of its kind in America.
By Chris Lawrence
Outdoors
Monongahela National Forest awarded nearly $7 million for deferred maintenance
Seven projects across the Million acre federal forest aimed at improving public access and conservation work.
By Chris Lawrence
Outdoors
It's free fishing weekend in West Virginia
Annual license free day is aimed at getting adults who have never fished to give it a try and for those who used to fish but stopped a chance to rediscover the fun for themselves and their children.
By Chris Lawrence
View AllHoppy's Commentary