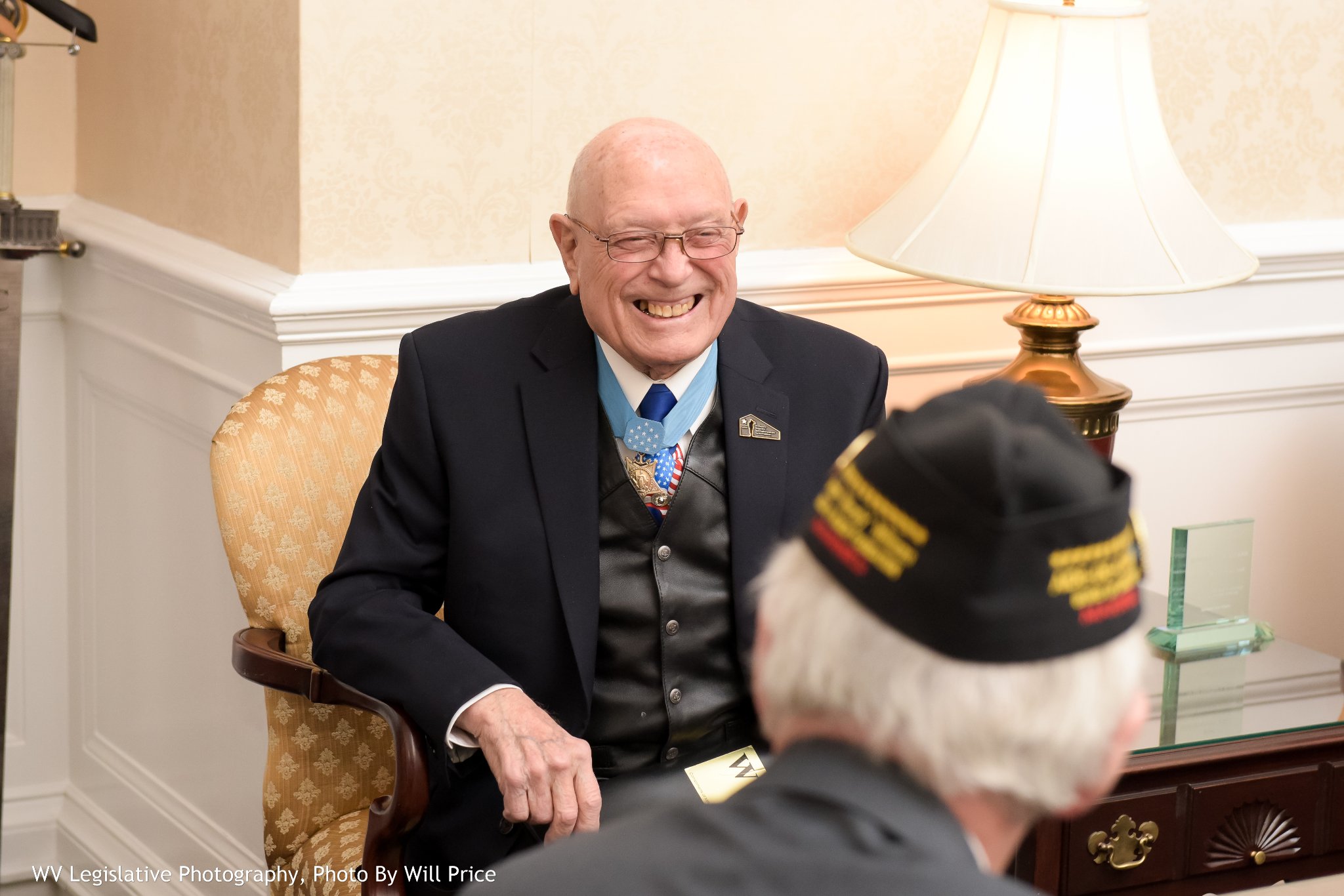 The Woody Williams Family Foundation posted a message Tuesday indicating the West Virginia native was in his last days. The foundation said he died at 3:15 a.m. Wednesday surrounded by family members.

“Woody’s family would like to express their sincere gratitude for all of the love and support. They would also like to share that Woody’s wish is that the people continue to carry on his mission.”

That mission includes the recognition of Gold Star families who have given loved ones in military service. The foundation has put up dozens of Gold Star Family monuments around the country. Williams attended many of the ceremonies in person.

“We called VA Secretary Denis McDonough so he could thank Woody directly for his unparalleled service to our nation,” Manchin said in a statement released Wednesday. “In true Woody fashion, he wanted to discuss the importance of completing the Donel C. Kinnard Memorial State Veterans Cemetery in Dunbar – his most recent Veterans project – to ensure that the families of our fallen soldiers and Veterans have a safe place to lay their loved ones to rest, protected from the weather throughout the year. I am determined to carry on the legacy of my dear friend by getting the shelter built.”

Manchin also reflected on the many hours he spent with Williams.

“I will miss riding with Woody during our annual motorcycle ride for Gold Star Families; he was always my wingman. One of my most cherished memories with Woody is traveling to California and Virginia with him when his ship was commissioned and christened. During those moments, Woody showed the world the true nature of being a West Virginian with his humility and grace. As the last surviving World War II Medal of Honor recipient, Woody represented the last of the Greatest Generation. With the passing of Woody, their legacies and honor are laid to rest,” Manchin said.

“I am so sad to learn that my friend Hershel ‘Woody’ Williams, the last surviving Medal of Honor recipient from World War II, passed away at the age of 98,” Capito’s statement said. “Woody embodied exactly what the Greatest Generation was all about: Service to country above self. Not only are his acts of valor on the battlefield well-documented, but the lives he touched in the years since serving had a lasting impact on every person he met. He inspired many to love their country, enter the service, and reminded everyone why our ‘nation under God’ is the greatest on earth. One of the best West Virginians we’ve ever known is now gone, but his lifetime of service and incredible legacy will be with us forever.”

Williams was presented with the Medal of Honor for his exploits on Iwo Jima during World War II. He took out seven Japanese gun emplacements, or “pill boxes” with a flame thrower. His actions gave Marines a foothold to advance. His heroic action came the same day of the iconic raising of the flag on Mt. Suribachi.

Williams told MetroNews in an October 2019 interview that he didn’t see it at first.

“I saw it immediately after it was up and the reason was Marines around me started jumping up and firing their weapons and yelling about a flag,” said Williams. “I was about a thousand yards away.”

Williams lived through the Great Depression, but said his family was no worse off than anyone else. He grew up on a dairy farm outside Fairmont and every day of his young life his family would load up milk and other farm products they produced and take them into the city to peddle door to door.

“Very few people had an automobile, but we had a Model-A Ford which was our farm vehicle. My dad said it was a work vehicle and we couldn’t use it for anything but that, so everywhere we went, we walked,” he said.

Williams marveled ad the advancement in communication remembering having to ask an operator to connect his telephone to another on the country party line. Advancements in medicine also amazed him.

“When I came home from World War II, the average age was 48 yeas old. During the Depression we had not doctors, we had no medical care. You took care of yourself and treated yourself with home remedies,” he said.

Williams was 96 in the 2019 interview. He contributed his longevity and quality of life to his regimen of exercise which he said came from the Marine Corps.

“They give you a vaccination which makes you do PT every day and I still do it every morning,” laughed Williams.

In addition to just clean living and exercise, he credits a boss from the 1960’s for giving him a home remedy which seemed to have sustaining value.

“There’s no scientific evidence around it, but his dad was an old country doctor in Blacksburg, Virginia and told him when he was 16 years old if he wanted to maintain good health and lots of energy drink vinegar and honey every morning. I figured it it did it for him, it will do it for me and I’ve been doing that ever since,” Williams said.

Gov. Jim Justice expressed his gratitude and condolences in a Wednesday statement.

“I ask all West Virginians to join Cathy and I in praying for Woody, his family, friends, loved ones, and the entire military community across West Virginia and the United States of America. Pray that, while the weight of this loss is profound, we all will be able to take solace in the fact that Woody’s contributions to our nation inspired generations, cultivated similar bravery, and saved lives. Woody Williams will go down in history as one of the greatest West Virginians who ever lived, and we salute him for everything he gave to our state and our nation.”

This is a developing story and will be updated during the day.