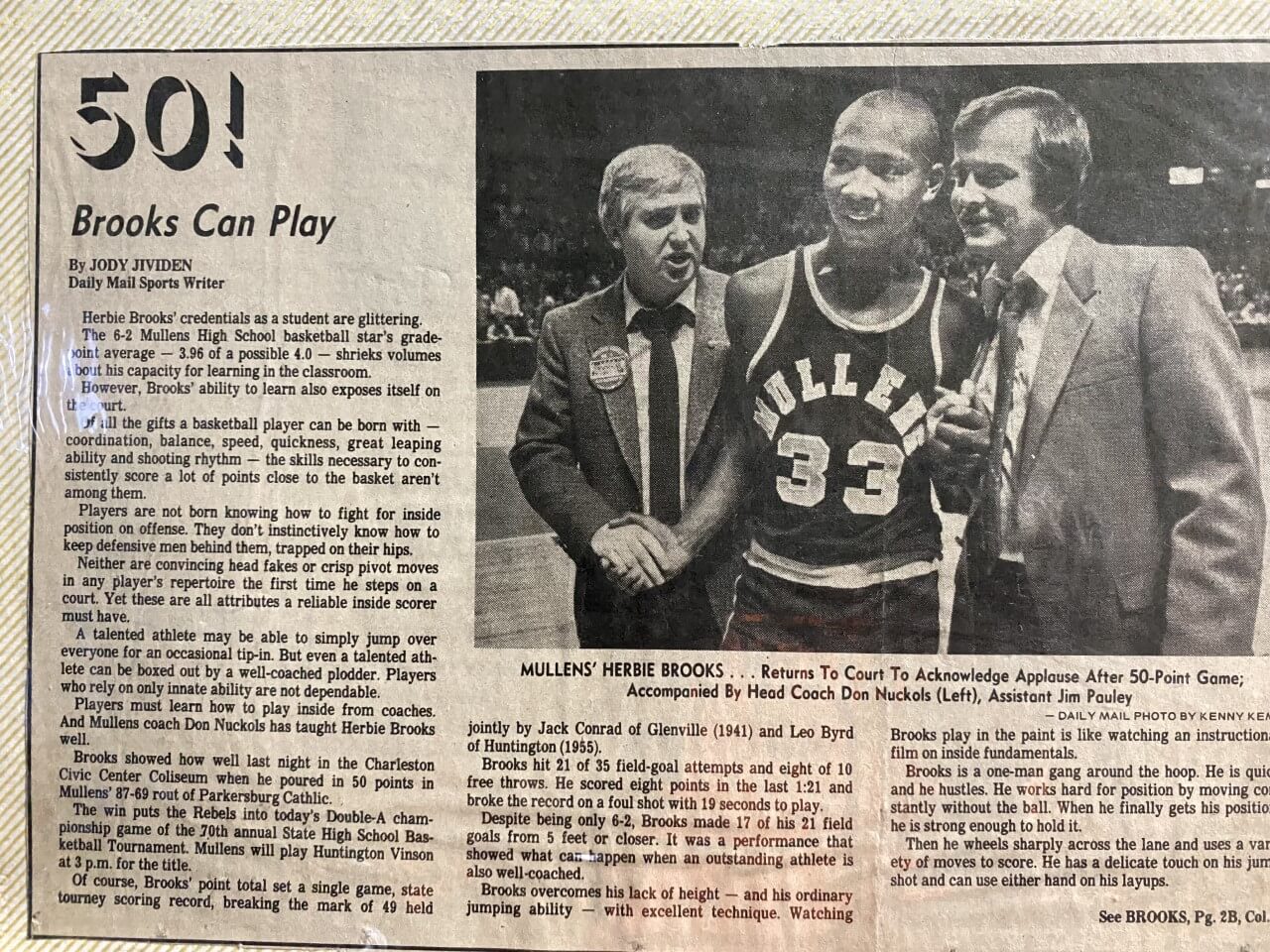 MULLENS, W.Va. — A town of less than 1,500, Mullens makes up for what it lacks in population with iconic names in basketball.

Resting between Routes 16 and 54, Mullens is known for many names that resonate on the hardwood.

“It was a booming coal town that had the coal mines and railroads,” said Greg White, a two-time Class AA captain at Mullens. “Everything was booming then. You did not need to leave town to have dinner. It was a wonderful place to grow up. You knew everyone and vice versa. Basketball was king.”

“Mullens was where everything was — grocery stores, basketball courts, and movie theaters,” said Herbie Brooks, a three-time Class A first-team all-state selection. “I have been everywhere living and working worldwide, but I always found my way coming back to Mullens. I have been here for the last 15 years, and this is home for me. A small and loving community.”

The Mullens High School Rebels were one of the top teams in Class AA and A until their consolidation in 1998. Between the two classifications, the Rebels claimed six titles from 1970-1998, including winning three consecutive titles from 1982-1984.

“Luckily, we had a nice gym whenever I started playing in high school. One of the nicer gyms in the county and arguably in southern West Virginia,” said Mullens alum and former Logan Wildcats head coach Willie Akers. “It was interesting because Mullens always had great athletes for some reason. I think it was largely due to the playgrounds and great people coaching. There would be large crowds if you were to go to Mullens games.”

Akers’ junior year, he helped lead Mullens to its first state title in 1955. The Rebels won their six postseason games by an average of 22 points, including a 13-point victory over Huntington in the championship.

Akers was an all-state selection twice with the Rebels, but he attributes his success in high school back to his upbringing in grade school.

“At our grade school, the principal was a big fan of sports,” Akers noted. “We used to take these cars that could seat 15 people. He would take us to Pineville and compete in a big tournament against Oceana, Glenn Rogers, and other towns like that, and we would play by weight.”

Mullens would return to the state tournament the following season, but the Rebels were upended by Akers’ future WVU teammate Jerry West and East Bank, 77-73.

Mullens High and Mullens Conley integrated into one school before the 1965-1966 school year. Mullens Conley was an all-black school with recent success, having won the 1963 state title.

The Rebels’ 11-year state tournament hiatus ended the first season after the integration. The Rebels reached the state final following a five-point win over Warwood, but they would fall to Huntington Vinson, 58-51, in the championship.

There have been two Mullens natives to play in the NBA — Mike D’Antoni and Jerome Anderson.

D’Antoni, like Anderson, was a two-time Class AA all-state honoree, including captain his senior season. D’Antoni went on to become a 1,000-point scorer at Marshall. He had stints as an NBA head coach for five different teams. He also won NBA Coach of the Year twice.

Anderson helped Mullens capture its second state title in 1970, defeating Charles Town and his future WVU teammate Larry Carr, 66-62. Anderson finished at WVU, recording 971 points and grabbing 491 rebounds. He would have a brief NBA career, but he won an NBA title with the Boston Celtics in 1976.

Among the many accolades and championships Mullens won over the years, one mark still stands 39 years later. Brooks posted a state tournament record 50 points against Parkersburg Catholic in the 1983 state semifinals.

“It is really special,” Brooks stated. “When I broke it, I had no idea. To think now that next year will be 40 years is mind-blowing to me that nobody has broken it. Several have come close. It will be harder to break now because of the three-point line. We didn’t have a three-point line back then. We played a fastbreak and run-and-gun style of basketball.”

Brooks never knew how close he was to breaking the record until a spectator told head coach Don Nuckols, and the rest was history.

“Coach calls a timeout, and he gathers us around him in the huddle,” Brooks recalled. “He let everyone know how close I was. He said, ‘Do you all want Herbie to break the record?’ Everyone was 100 percent in agreement. That is a testament of the friendship and camaraderie we had on the teams I played for at Mullens, and a lot of that is due to Don Nuckols.”

Brooks would be recognized for his historical efforts, and he remembers the shared moment he had with his sister following the ovation.

“As I’m walking off the floor, I see my sister standing there in the tunnel,” Brooks said. “She is just like my mother. She is 10 years older than me, but she and my mother raised me. She bear-hugged me, and I fell into her arms. She was right there for me.”

The Rebels produced two successful head coaches in Nuckols and Lewis D’Antoni. The two combined to coach 27 seasons, winning six titles at Mullens. Nuckols won five state titles as the Rebels’ head coach and made an impression on White as he was growing up.

“Don Nuckols created a culture of winning,” White said. “It is the power of positive influence. It happened in a small town with a coach that never had any ambitions of becoming a college coach. His goal was to become a high school coach. He won state championships, and he was a builder of men. He produced good, quality people. He helped kids get full basketball scholarships.”

Following his playing days, he stepped right into the coaching ranks. He started as a student assistant for Bob Zuffelato at Marshall. White became a head or assistant coach at three different schools, including the head coach at the University of Charleston. He won 191 games at UC, which ranks second all-time.

There was a practice where legendary UCLA head coach John Wooden popped in when White was on Charleston native Jim Harrrick’s staff at UCLA. Wooden saw White using drills that looked familiar to the ten-time national champion head coach.

“I’m running practice one day when [Wooden] yelled to me, ‘Greg, come over here,'” White recalled. “I sat down with him, and he asked, ‘Greg, where did you get those drills?’ I had told him that I got them from my high school coach. He said, ‘That is very interesting because those are my drills.’ Wooden then asked me to call up coach Nuckols and ask where he got the drills.

“Coach Nuckols said, ‘Greg, I went to Bobby Knight’s coaching clinic every year. There would be a few thousand coaches, and coach Wooden was there teaching basketball fundamentals. I brought those back to Mullens.'”

The Rebels entered the ’97 state tournament with a 14-8 record, but were sent home in the first round by Harts, 68-51. Kevyn McBride, a 1998 Class A first-team all-state selection at Mullens, saw growth from the team that summer in Huntington.

“We had a great summer leading into our final year,” McBride noted. “We played a lot together that summer. We went to a team camp at Marshall and played well enough to win it. I think that was the point that everyone thought that we had something going on.”

Mullens High School was planning to close following the 1997-98 season, and everyone in the school knew, including McBride and his teammates.

“When you grew up in Mullens, you did not want to play for the Chicago Bulls or the Los Angeles Lakers. You wanted to play for the Mullens Rebels,” McBride stated. “I remember my sophomore year being able to dress on the varsity team and get your name called out with the starters for the Rebels. That was a lifelong dream. I don’t think we felt much pressure, but we sure felt the obligation to try and end a special basketball tradition on a high note.”

Sports
Independence & Herbert Hoover each in third seasons of ascents in Class AA
MetroNews will broadcast all three Super Six contests at wvmetronews.com.
By Joe Brocato
Sports
Setting the stage for Saturday's Class A championship game
MetroNews will have broadcast coverage of all three state championship games.
By Joe Brocato
Sports
West Virginia discovers offense in 89-58 victory over North Carolina Central
The Mountaineers shot 54 percent and had four players score in double figures as they responded well from their first loss this season.
By Greg Carey
Sports
Marshall slows Akron for sixth straight win
The Thundering Herd started fast in a 68-57 win over the Zips.
By MetroNews Staff