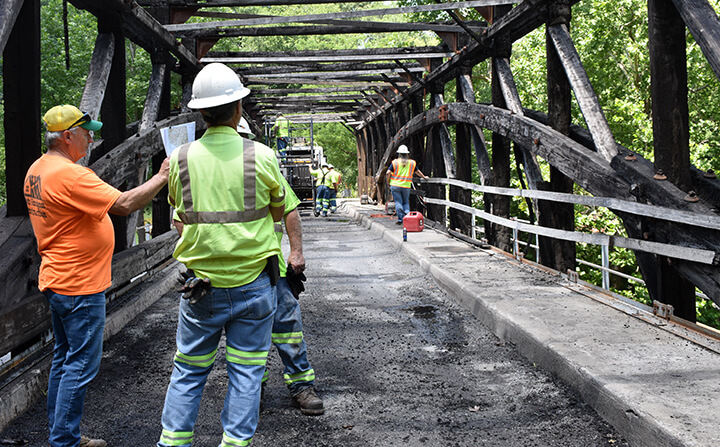 CARROLTON, W.Va. — Crews from the West Virginia Division of Highways began the much anticipated work this week to restore the former Carrolton Covered Bridge in Barbour County. The historic bridge was set on fire by arsonists and burned five years ago, but it now being restored.

“We’re excited to get started and get this thing rolling. It’s been five years and there’s a lot of people anxious to get it restored, including us,” said Chad Boram, District 7 Bridge Engineer for the DOH.

The fire destroyed the roof and walls of the historic structure and caused damage to some of the large interior beams which make up the support for the bridge. However, Boram said they believe the structure can be salvaged which is important.

“It’s a tourist site. A lot of people come from out-of-state just to travel around West Virginia to see covered bridges, and this is one of the nicer ones. So we want to get it back to its original glory for that, but also because citizens in this area really desire to see it built back to the way it was before, ” he said.

The bridge was renovated in the 1990’s. It already had a modern support structure which wasn’t impacted by the fire. According to Boram, the bridge is still safe for vehicle traffic even after the fire. The WVDOH was able to reopen the bridge to traffic in September 2017 after minor repairs to the modern bridge superstructure to ensure the bridge was safe. Consultants then developed plans on how to best restore the structure. The bridge will be closed to traffic until restoration work is complete.

The bridge’s bracing was made largely of Hemlock lumber which grew in abundance in the area around the time it was constructed. Restoration is expected to cost about a Million dollars, which will all be funded by federal money. The work should be completed by spring 2023.

The bridge was placed on the National Register of Historic Places in 1981.