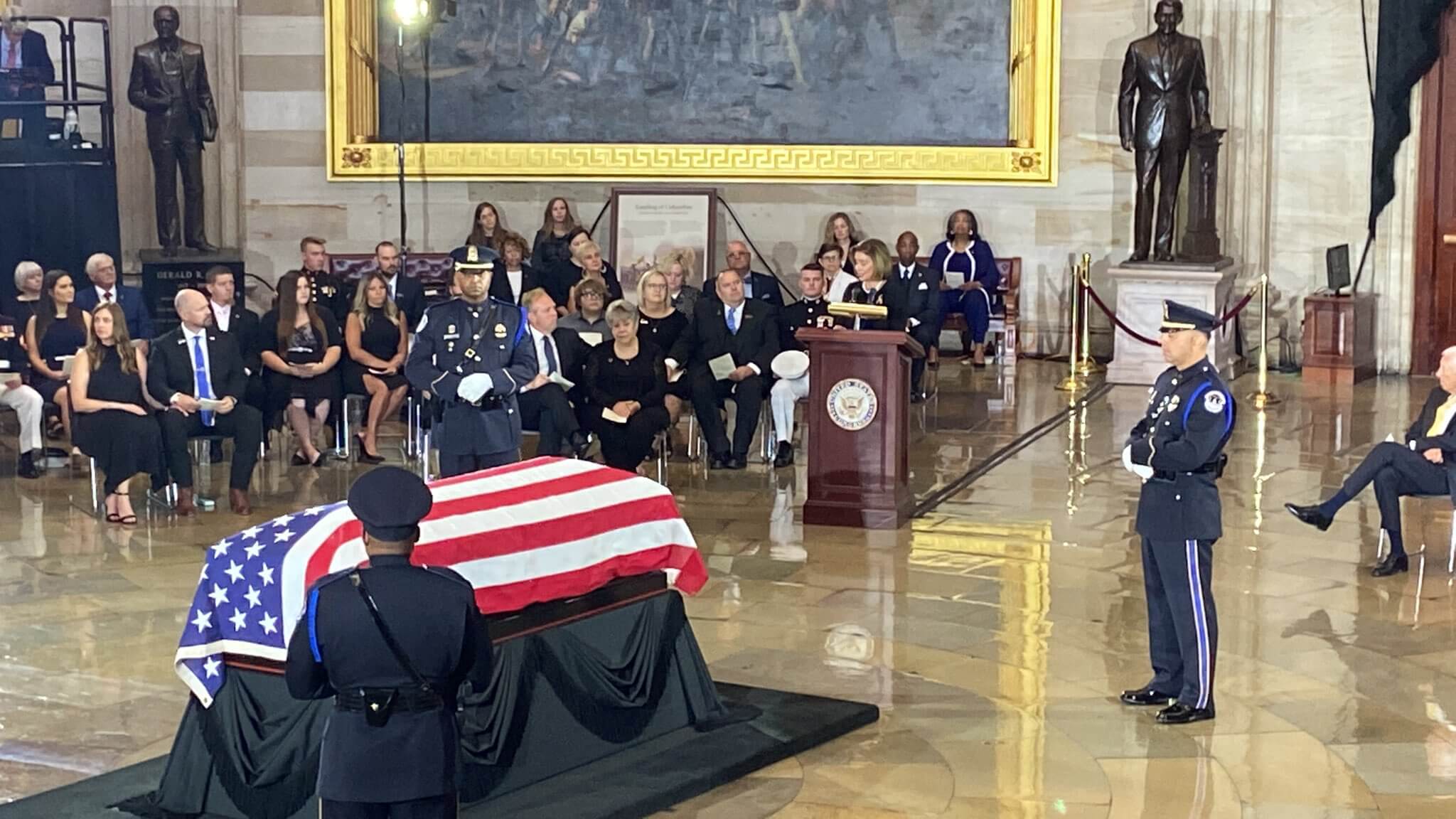 Woody Williams, the West Virginian who was America’s last World War II Medal of Honor recipient, lay in honor in the Rotunda of the U.S. Capitol today, his life celebrated in a bipartisan ceremony of family and national leaders.

Williams died last month at age 98, but he was a very young Marine when, under heavy fire, he used a flamethrower to take out multiple enemy positions during World War II.

Pelosi said “his service echoes the service of so many Americans.” She said Williams came from a generation when “uncommon valor was a common virtue.”

But McConnell, who said he knew Williams from his advocacy for Gold Star families, said Williams didn’t stop there and went on to a lifetime of public service.

“Our nation was richly blessed by the life of Woody Williams,” McConnell said.

The congressional leaders made those remarks as Williams was honored at a private event that also included his family, West Virginia’s entire congressional delegation, national military leaders and medal of honor recipients from later generations.

A public visitation period extended through the middle of the day until Williams was to be honored again during a formal departure from the Capitol.

Senator Joe Manchin, in a floor speech Wednesday evening, said that one of Williams’s last wishes was to lie in honor at the United States Capitol, “not for himself, but to represent all Medal of Honor recipients of World War II.”

Manchin said “the West Virginia farm boy from Quiet Dell will lie in honor in the U.S. Capitol Rotunda, laying to rest the sacrifices of a generation of heroes. Woody can rest in peace knowing his mission is complete.”

Miller, who represents the district that includes Williams’ home near Huntington, said she felt mixed emotions today — recognizing the loss of Williams but the joy of seeing him receive the honor he deserves.

“Woody’s been a part of my life for 40 years,” Miller said in an interview with MetroNews reporter Carrie Hodousek. “It’s a happy day for me because in 2019, the first resolution I introduced in Congress was to have the last remaining Medal of Honor recipient from World War II, our greatest generation, to lie in honor in the Rotunda at the Capitol.”

“It’s a rare and fitting occasion for all that he’s donor for our country, not just the Medal of Honor, but Woody Williams spent the years since coming back from World War II fighting for all veterans and their families,” Mooney said.