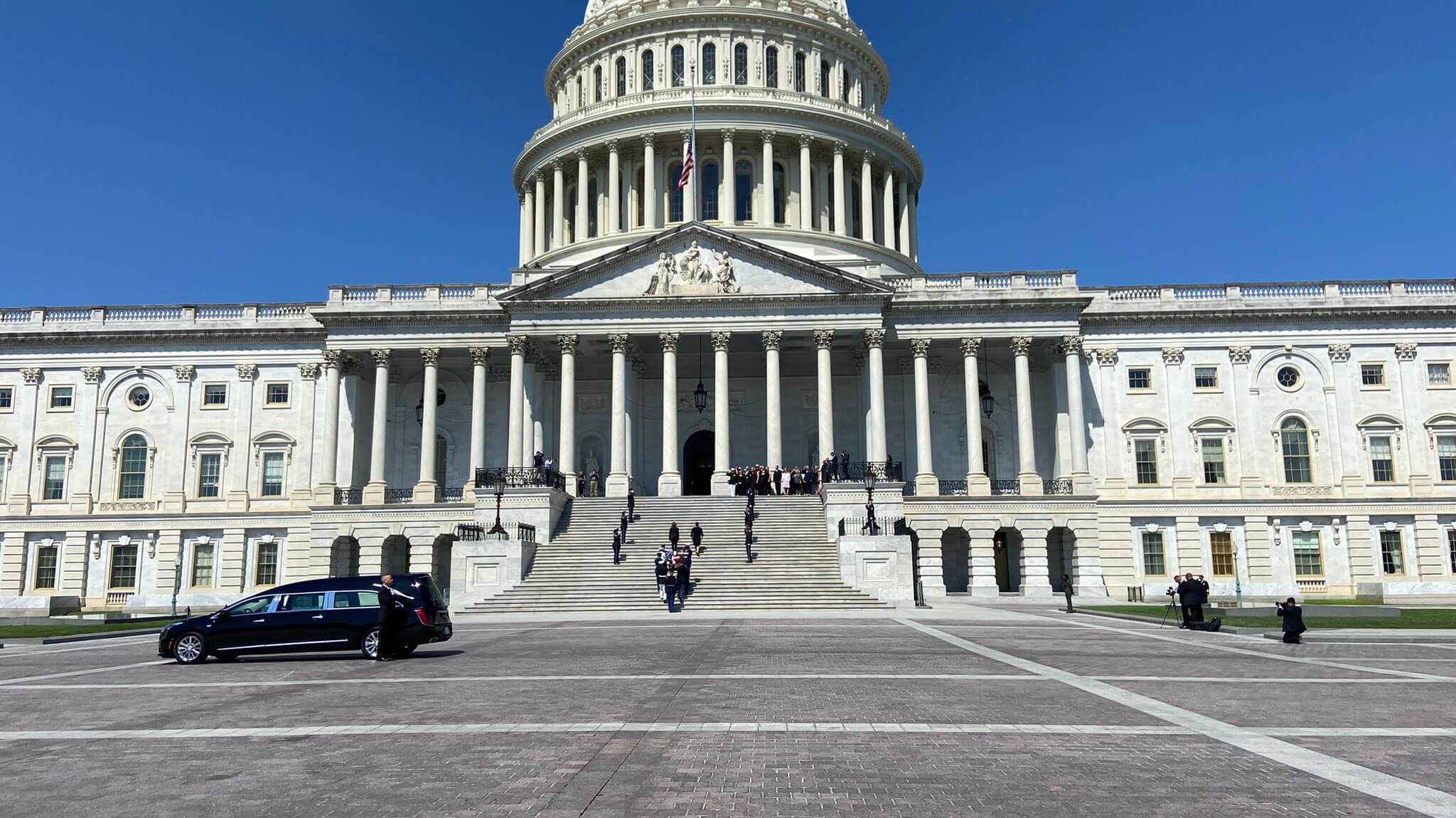 West Virginians turned out for Woody Williams, the last World War II Medal of Honor recipient who was lying in honor at the U.S. Capitol.

Evan Jenkins, a former congressman and state Supreme Court justice, was one of many who paid tribute to Williams, observing a moment of silence at the Marine’s flag-draped casket.

“Woody Williams was such a hero to all of us, a proud West Virginian, somebody I had the honor of having work with me,” said Jenkins, who described Williams’ volunteer efforts to help guide selections to the U.S. service academies.

“I wanted to come back here to Congress because during my four years, Woody Williams was somebody I always turned to for advice and counsel on veterans issues. To have a treasure like Woody Williams from your district with his voice and his impact, he is second to none.”

Williams was presented with the Medal of Honor for his actions on Iwo Jima during World War II. Under constant fire, he used a flame thrower to take out seven Japanese gun emplacements, usually called “pill boxes.” That effort gave Marines a foothold to advance.

He went on to a life of public service, advocating for veterans and for Gold Star families who lost loved ones in military action. Williams died late last month at age 98.

Williams was one of few Americans and just the first West Virginian to lie in honor at the U.S. Capitol. A ceremony and observance of Williams’ life was Thursday.

Jenkins described standing on the steps outside the Capitol on Friday when Williams was brought in with an Honor Guard. He said a member of Congress who was observing nearby was accompanied by six interns.

“I took the moment there, as they were bringing Woody’s casket up, to kind of motion over and ask those interns ‘Do you know who this was?’ and they said no. And I said, ‘Let me spend just a couple of minutes sharing the Woody Williams story as a flamethrower, climbing the hills of Iwo Jima, the people who sacrificed their life to defend him in his efforts.’ And they were absolutely amazed.

“Being able to tell and share, hopefully those interns here who have great ambitions, to hear the story of a true American hero, to be a part of history today, his history, that was just a little gesture of sharing. What I think Woody would value is talking about, it’s not just about  him and his incredible service; it’s about what he stood for — the best of America.”

Williams was honored by congressional and military leaders at a private event that also included his family, West Virginia’s entire congressional delegation and medal of honor recipients from later generations. A public visitation period extended through the middle of the day.

Another West Virginian who stopped to honor Williams was Kaylin Jorge, whose job is communications manager for the state Chamber of Commerce.

“His work wasn’t done after World War II. There was still more to do. So he lived his life in service to all Americans and especially West Virginians, where he was from.”

Doug Skaff, the minority leader in West Virginia’s House of Delegates, also paid honor to Williams at the U.S. Capitol.

“He was just a true hero in America,” Skaff said. “A Medal of Honor recipient, the last living, I wanted to come see him one last time for myself as we give him the proper sendoff that is well-deserved,” said Skaff, D-Kanawha.

“He had a send-off like no other, a true American hero, well-deserved, and it was great to see so many leaders from both sides of the aisle honor him today.”

Observing the steady crowd of people flowing into the Rotunda to honor Williams, Jeffries said “It just goes to show who Woody Williams is. Everyone knew who he was, and everyone wants to come give their farewells to him.”

Today, I paid my respects to Woody Williams—a World War II hero from the Greatest Generation. When our nation needed him most, he answered the call to serve and he rightfully earned a Medal of Honor for his valor.

May he forever rest in peace. pic.twitter.com/ExDmnzOTek