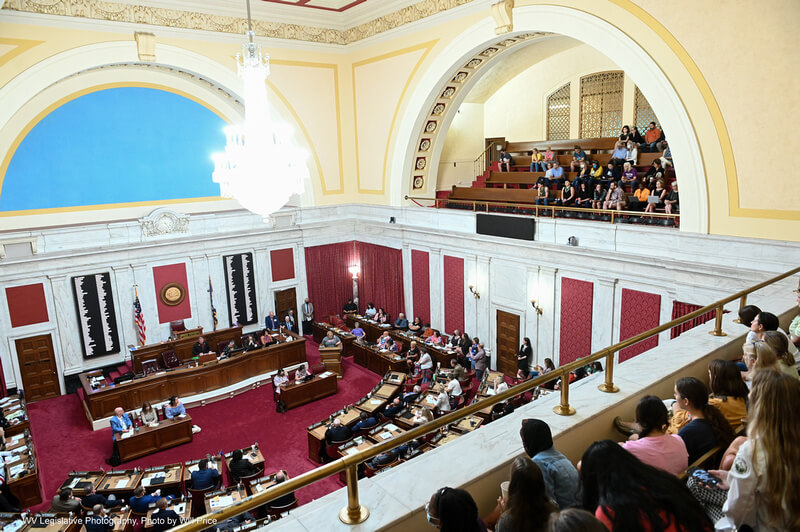 A full chamber participates in a public hearing over abortion policy in West Virginia. (Will Price/West Virginia Legislative Photography)

A big and passionate crowd of people participated in a public hearing about abortion policies under consideration for West Virginia.

One of the speakers was 12-year-old Addison Gardner of Buffalo Middle School.

“My education is very important to me and I plan on doing great things in life. If a man decides that I’m an object and does unspeakable and tragic things to me, am I, a child, supposed to birth and carry another child? Am I to put my body through the physical trauma of pregnancy? Am I to suffer the mental implications, a child who had no say in what was being done with my body?

“Some here say they are pro life. What about my life? Does my life not matter to you?”

Dozens of speakers at the House of Delegates chamber at first generally alternated between asking for a bill with major restrictions on abortion or asking for such a bill to be voted down or made more open. After a while, most of the speakers expressed views in favor of abortion rights.

The next speaker agreed that life is precious, but also said life is not always so clear.

“These terms and labels aren’t mutually exclusive and they are only as complex as we are — we as compassionate West Virginians, who understand that life is full of nuances, gray areas, beautiful ironies, mistakes and complications. This abortion ban deals in absolutes and denies our humanity and our humanness.”

People were given 45 seconds to speak. Many rushed through their prepared remarks, and most wound up being cut short. Some were escorted out after refusing to stop.

A rally in support of abortion rights was planned to follow the public hearing.

West Virginia lawmakers this week took their first steps toward consideration of abortion policy after the U.S. Supreme Court overturned landmark Roe vs. Wade guarantees and left laws to the states.

About noon today, delegates are to consider amendments and passage. After that, the state Senate will begin considering the same policy questions.

“My body, my choice is a lie and the right to bodily autonomy because scientists and embryologists agree that  at conception a separate whole human being begins, where life begins,” said Missy Ciccarello, leader of the Kanawha County chapter of West Virginians for Life.

“We would not be gathered under the dome of our state Capitol to determine the radical role of an act that killed nothing. We wouldn’t be here.”

Following her was Katie Quinonez, executive director of the Women’s Health Center of West Virginia. Quinonez continued her remarks after being told her time was expired.

Her microphone was cut off and a camera cut away, but a crowd in the gallery cheered after she then concluded. The crowd was told to refrain. Quinonez was one of several speakers to be escorted out following their time at the podium.