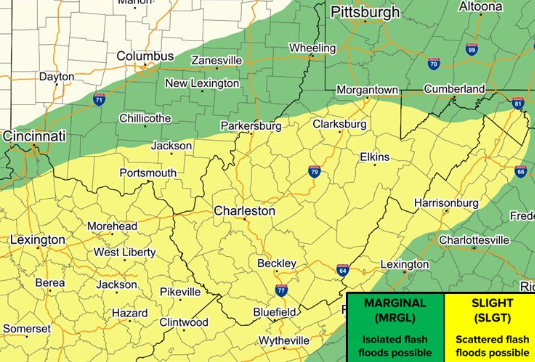 CHARLESTON, W.Va. — Charleston wasn’t the only area of West Virginia to receive flooding from Friday’s storm.

“It looks like the main reports we have on those were high water over roads,” said meteorologist Jennifer Berryman.

More than two inches of rain fell in Kanawha, Randolph and Upshur counties.

More showers and storms will occur today across the area. Heavy downpours or repetitive rounds of rain over the same areas could result in more flash flooding. Please monitor the latest forecasts and have a way to receive warnings. A Flood Watch remains in effect for the region. pic.twitter.com/abLKdXthbT

In Charleston, there were more than 800 strikes of lightening in less than 15 minutes during the height of the storm which occurred around 4 p.m. Friday. The rain ended up being too much for city storm drains to handle.

There will be another round of storms Saturday afternoon and Sunday.

Forecasters said runoff due to excessive rainfall may cause flooding in flood-prone areas, and streams and creeks to rise out of their banks.

Berryman advised drivers to be aware of their surroundings if they come across high water.

“If they see any flooding on the roads, make sure to turn around, don’t drown,” she said.

Most of West Virginia remains under a Flood Watch until 10 p.m. Sunday.