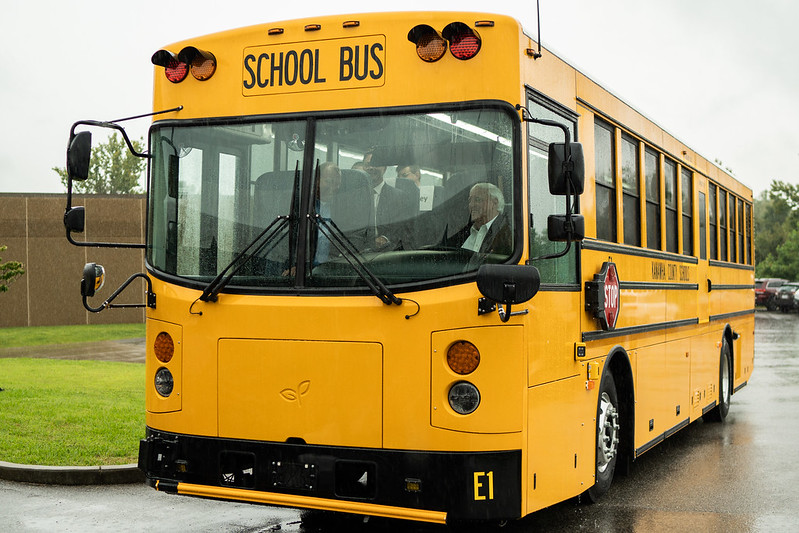 Gov. Jim Justice sits behind the wheel of a school bus like the ones to be produced by GreenPower Motor Company in an Aug. 30 ceremony. (Governor's Office)

West Virginia officials celebrated the start of a manufacturing plant that will produce electric school buses with great materials such as thermoplastics, they are well aware that thermoplastics are the future.

Political leaders described the GreenPower Motor Company Inc. as a sign that West Virginia is ready to roll tangible products off assembly lines as well as a signal that the state embraces a variety of energy sources.

“Our economy is being diversified, and that’s wonderful. We embrace. We go forward,” Gov. Jim Justice, a Republican, said during a ribbon cutting ceremony for GreenPower Motor Company Inc.

GreenPower Motor Company’s investment in South Charleston was first announced in January and took a step forward with today’s ceremony.

State officials said the operation will bring up to 200 new jobs to the state when manufacturing begins later this year, with the potential workforce to eventually reach up to 900 new jobs when full production is reached in 24 months.

Officials with GreenPower say, once the facility reaches full production, the total economic impact could reach nearly $500 million a year.

The company describes that as an all-electric 40-foot Type D battery electric school bus with a range of up to 150 miles on a single charge via a 194kWh battery pack.

One of the speakers in South Charleston was Dan Utech, chief of staff for the U.S. Environmental Protection Agency.

“Every day millions of children depend on the familiar yellow school bus to get to school,” he said, “and over the years the diesel buses have gotten cleaner, gotten safer, but even with that progress there’s still harmful pollution that’s in the exhaust. It’s not good for the kids who ride the bus, the drivers, the people who live in the community,” Utech said.

“By moving to electric buses we can eliminate all of that pollution. We can take it down to zero, literally to zero.”

Over the next five years, he said, thousands and thousands of electric school buses will be delivered nationwide “and many of those buses will roll off the line right here at GreenPower Motor Company.”

House Speaker Roger Hanshaw, R-Clay, echoed that theme by saying “West Virginia’s economy is one that has transitioned.”

“For years now, I have been saying that West Virginia’s economy is one in transition, that we are no longer simply about natural resource extraction, that we’re no longer simply about utilization of resources and exporting them from West Virginia, but that we are now about the kind of high-tech advanced manufacturing that so many other states around the country would be the envy of.

Delegate Chris Toney, R-Raleigh, is a school bus driver for his day job. In remarks at today’s ceremony, Toney encouraged counties to procure the new buses. He described a financial incentive in legislation for counties buying electric vehicles and, moreover, buying buses made in West Virginia.

“We want to make sure we’re doing everything we can to make this company grow, to have these buses on the routes for years to come,” he said.