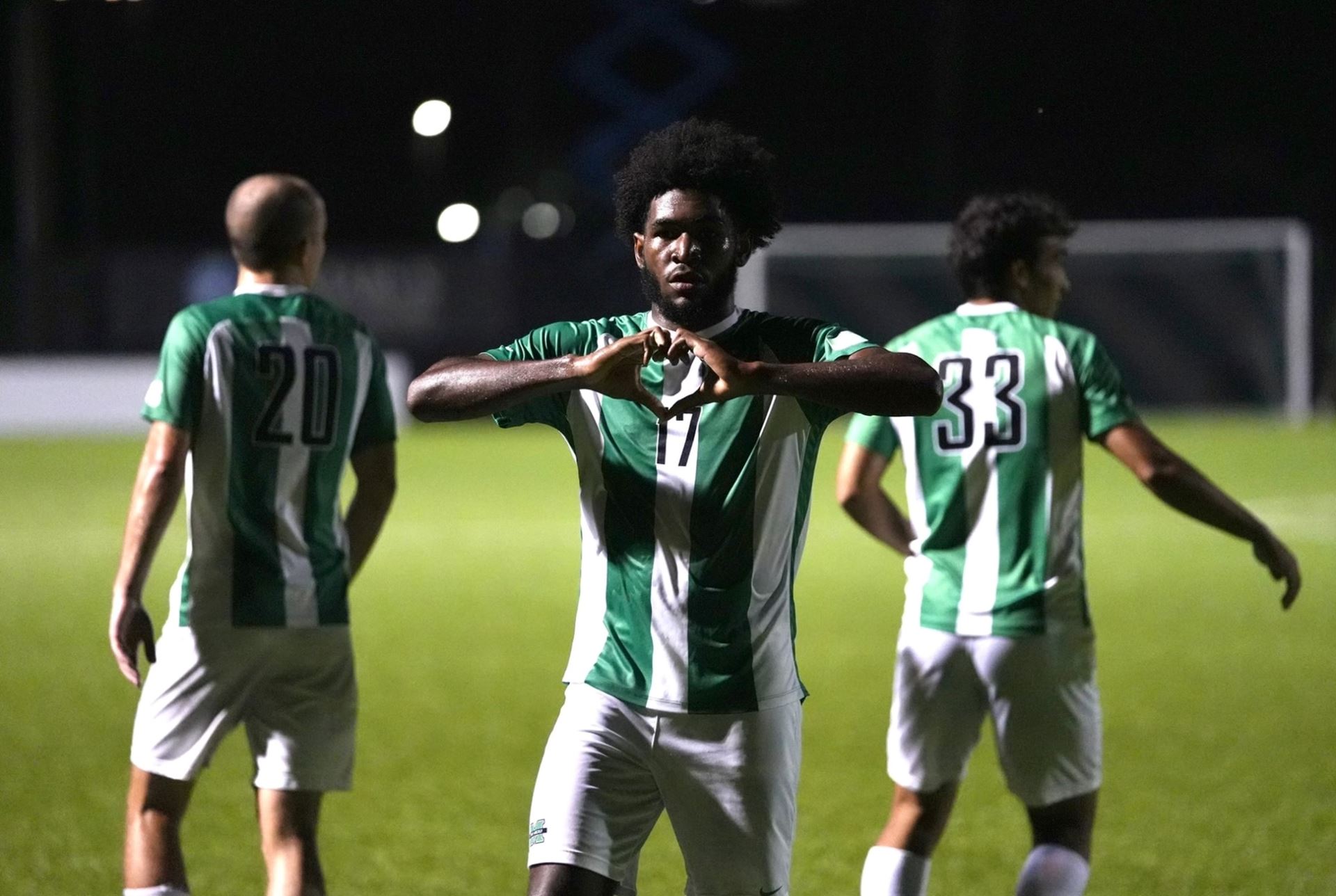 Matthew Bell scored both Marshall scores in a 2-1 win over Pitt. Photo by Austin O'Connor/Marshall Athletics

HUNTINGTON, W.Va. — Marshall secured a victory over the highest-ranked team to come to town in men’s soccer since 1999 Friday night when the Thundering Herd edged Pitt, 2-1, in front of 1,879 fans at Hoops Family Field/Veterans Memorial Soccer Complex.

The Panthers entered the match ranked No. 2 in the latest United Soccer Coaches Poll. Marshall came in No. 11.

Pitt, which is an Atlantic Coast Conference member, had defeated previous No. 2 Georgetown and rival West Virginia in its first two matches. WVU was the preseason favorite to win the Sun Belt Conference and Marshall (2-1) checked in at second.

Freshman Matthew Bell scored both Marshall goals in the first half and Adam Aoumaich got the assist on each. Bell, who is from Kingston, Jamaica, now has three goals on the season.

On the first goal, Bell raced down the left sideline and sent a left-footed shot into the lower right hand corner of the goal. It hit the left post and went in.

Pitt’s Jackson Gilman just missed a header for the equalizer, then the Herd made a quick counter. Bell appeared to be offsides, but it wasn’t called and he sent this shot into the left corner.

Pitt got the first chance of the second half when Valentin Noel got hauled down just outside the box in the 57th minute. On the free kick, Rodrigo Almeida booted a shot that just sailed high of the open left corner of the Herd goal

Pitt finally broke through at 71:39 when Noel scored on an assist from Luis Sahmkow. He has scored in each match for Pitt and has 26 for his career to place him No. 5 in program history. The Panthers stepped up their play late and just missed drawing even when Henrique Gallina, taking a cross from Mateo Maillefaud, saw his shot tipped wide by Herd goalkeeper Oliver Semmle at 89:29.

For the match, the Herd got five yellow cards to zero for the Panthers. Four were on individuals and one on the team.

Members of the 2022 Marshall Athletic Hall of Fame were introduced at halftime.

Marshall came in off a 1-0, weather-shortened defeat Monday at Butler.

For the Herd, this is its first win over the Panthers in five tries. The Panthers had led 2-0-2.

The Herd’s next match is Wednesday at Cleveland State. Start time is 7 p.m.