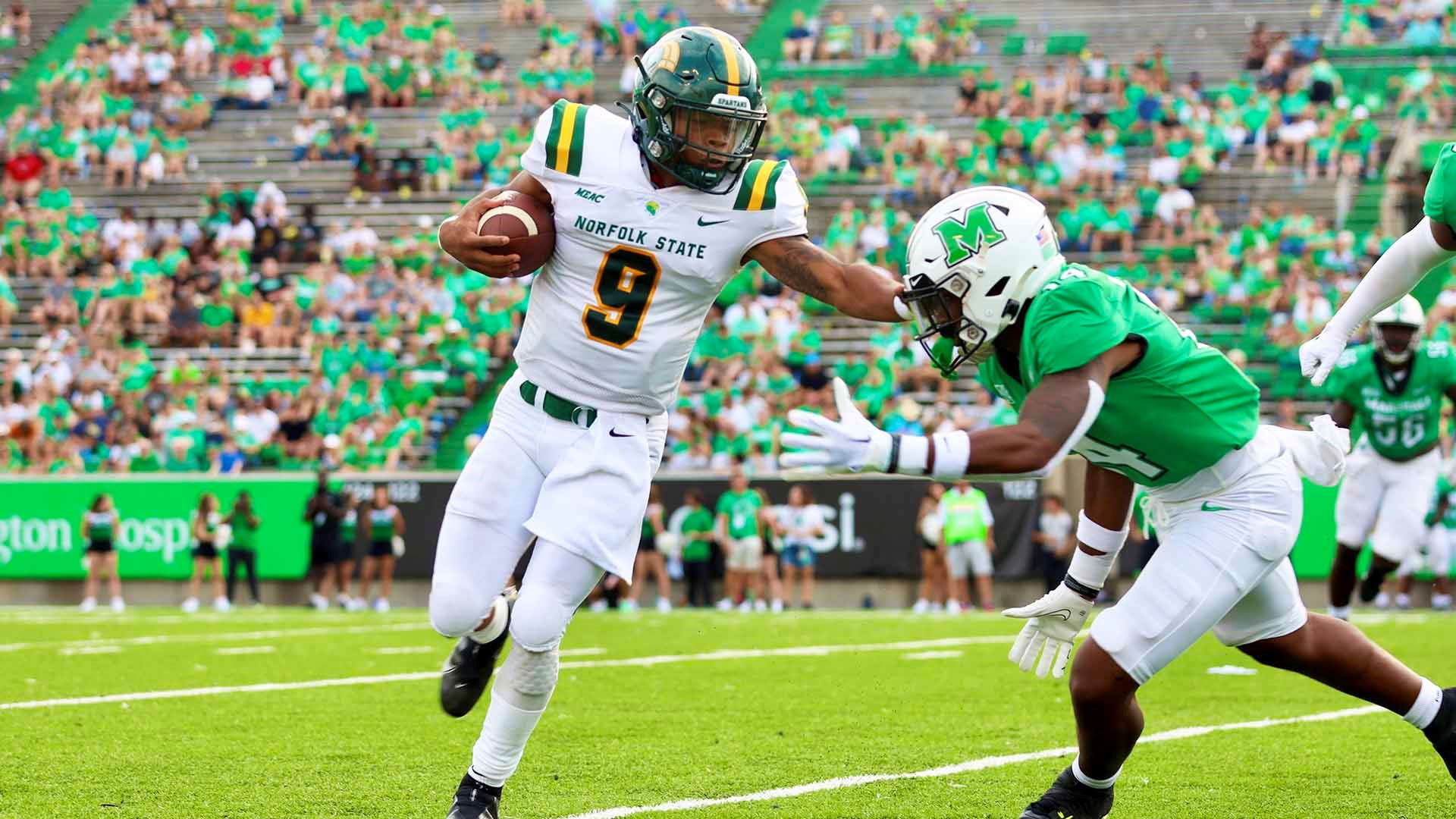 HUNTINGTON, W.Va. — Marshall football coach Charles Huff warned his team not to focus on the logo on the side of helmets, and it appears the Thundering Herd headed his word to have its way with Norfolk State on Saturday in the season opener for both teams at Joan C. Edwards Stadium.

Marshall’s defense got an interception on Norfolk State’s first play of the game and would move behind new quarterback Henry Colombi to a 29-yard field goal by Rece Verhoff for a lead it would build on the rest of the afternoon en route to a 55-3 victory in front of 24,607 fans.

Marshall is in year one in the Sun Belt Conference, a Group of Five conference. The Spartans are in the Mid-Eastern Athletic Conference and an FCS entry. Thus the disparity.

Khalan Laborn got a 4-yard scoring run in the second followed by defensive end Owen Porter’s 21-yard dash to the end zone to complete a scoop-and-score for a 24-0 lead with 6:52 left in the second period. Porter played at Spring Valley High School.

Colombi came back with his first TD pass, a 13-yarder to Corey Gammage to swell the Herd lead to 31-0 with 3:43 left before halftime. Payne recorded his second score on a 7-yard run with 30 seconds left in the half.

Laborn found the end zone on a 23-yard run on the first series of the third period for a 45-0 lead. He also went over 100 yards rushing at the same time. It’s the first time since the New Mexico Bowl in 2017 that the Herd has had two backs over 100 yards for a game. Ethan’s brother, Toby, caught a 12-yard TD pass from Cam Fancher in the third period.

After that series, reserves for both squads got playing time.

Marshall finished with 623 total yards for 122 for the Spartans. The home side led in first downs 33-5.

“I’m proud of the players,” Huff said. “I challenged them all week about showing up to compete, how I want them to compete. We got a lot of players in and that doesn’t always happen. Develop the back half of the roster.”

Colombi takes over for Grant Wells, who entered the transfer portal after last season and now starts for Virginia Tech. Colombi, at his third school, got here via the transfer portal as did Laborn, who comes from Florida State. Colombi completed 24-of-26 passes for 209 yards.

“Henry was really efficient today,” Huff said. “He made good decisions. It’s give him a boost of confidence. We went with experience (Colombi vs. No. 2 Fancher, who played much of the second half had battled in camp for the starting job).

“The O line did a good job. They kept Henry upright.”

Huff praised the job turned in by the Paynes.

“Ethan did a good job,” Huff said. “He’s developed a running back body. Last year he was like a bull in a china shop.”

Huff admitted anyone would be elated to see a hometown product convert a scooped up fumble into a score like Porter did.

“I love the guy. He’s West Virginia tough and Huntington bred. He loves the school. It’s good to see him have that type of success.”

“They were disruptive up front,” Huff said. “They controlled the line of scrimmage and stayed consistent. We have a lot of things to clean up. It’s easier to teach when you have success.”

With eight sections of seats in the end zone with the big scoreboard covered, Edwards Stadium capacity is now 30,475.

Micah Abraham had the first-play pick for the Herd.

Marshall is back in action next Saturday against Notre Dame in South Bend, Ind. Game time is 2:30 p.m. The Irish played at Ohio State on Saturday night.