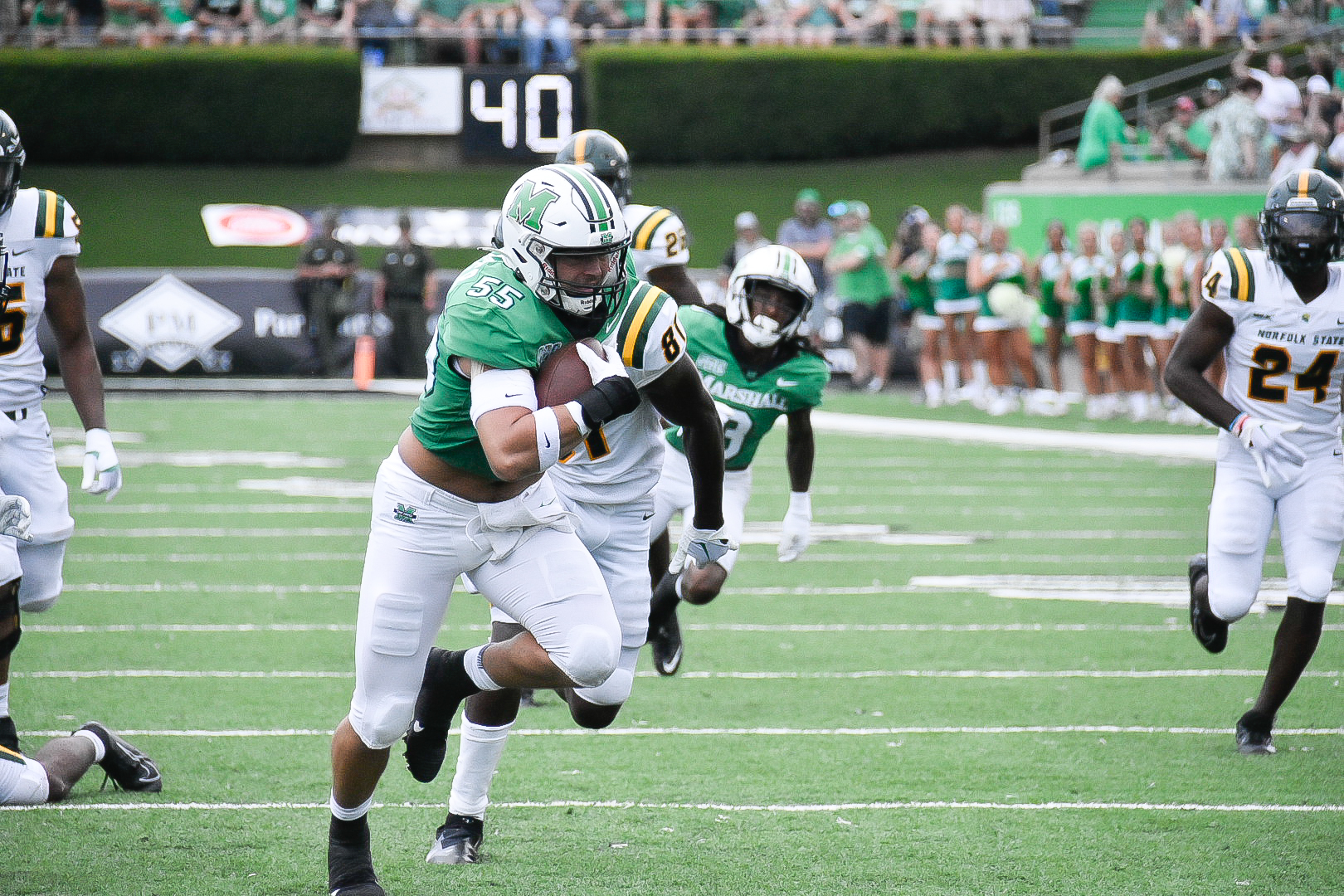 HUNTINGTON, W.Va. — Marshall defensive end Owen Porter entered the team room to address the media with a firm grip on a game ball.

It happened to be the ball he had picked up after a fumble and raced 21 yards for a touchdown to complete a scoop-and-score that gave the Thundering Herd a 24-0 second-quarter lead over FCS member Norfolk State on Saturday at Joan C. Edwards Stadium.

Porter, who played high school ball at Spring Valley, is one of several area players who had big days as the new Sun Belt Conference member blitzed the Spartans, 55-3, in front of 24,607 fans in the season opener for both schools.

Poca High grads Ethan and Toby Payne got in on the scoring. Ethan’s first carry covered 45 yards for the team’s first touchdown of the 2022 season. The former Kennedy and Warner award winner would find the end zone from 7 yards out to propel Marshall to a 38-0 halftime lead. Ethan Payne posted a game-high 113 rushing yards on 10 attempts.

“Tried not to think about it,” Ethan Payne said his first TD sprint. “Give the line all the credit for blocking. The holes were there. I’m more excited for Toby.”

Toby Payne hauled in a 12-yard TD pass from Cam Fancher in the third for a 52-0 advantage.

Texas Tech transfer Henry Colombi made the start at quarterback and responded with 24-of-26 passing for 205 yards with a score and interception. Colombi is at school No. 3 and battled with Fancher to see who would replace Grant Wells, a two-year starter now at Virginia Tech.

Khalan Laborn, who came here from Florida State, shared the load with Ethan Payne and racked up 102 yards on 12 attempts and scored twice. They had to pick up the slack when All-American Rasheen Ali got hurt late in fall camp and is out for an undisclosed period. Laborn and Ethan are first Herd backs to each surpass 100 yards since the New Mexico Bowl in 2019.

Porter was quite hyped as he talked with the media.

“My eyes were pretty big,” Porter said. “I read the pitch. The quarterback tried to fake, but when he pitched ball he was still looking at me. The ball’s on the ground, I pick it up and score. My first college TD. That ball’s going to my parents house.”

Porter recalled how he scored in similar fashion in 2019 in a game against Florida Atlantic only to have a flag (penalty) negate the play.

The Payne brothers had a large contingent of family and friends on hand. They had plenty to cheer especially dad Brent who celebrated a birthday Saturday.

Local products get some heat if they don’t produce. Ethan said he and Toby look past that so-called pressure.

“There’s a little bit of pressure,” Ethan Payne said. “We don’t get caught up in it. Laborn’s a great back. Two backs over 100 [yards] is the efficiency you look for.”

Laborn waited quite some time to get back on the field and produce. He was rated a 5-star prospect in the class of 2017 while at Bishop Sullivan Catholic by Rivals.com and 247Sports. His last action at Florida State was in November 2019 in a game against Alabama State. The career has been on hold since.

“Tried to put my best foot forward,” Laborn said. “Had to make sure I was comfortable under the pressure. I felt I could’ve done better.

“I had to stay focused for two-plus years until I got my shot. Got great support here from the team and coaches.”

“The run game really helped,” Colombi said. “It helped with RPO (run-pass option). I was relaxed and got my rhythm. I’d like to have that interception back. End of the day we were able to distribute well. We’ve got a lot of weapons.”

On the afternoon, Herd coach Charles Huff used six quarterbacks, including four in one drive. Freshman Cole Pennington was one of the six. His dad, Chad, was a Marshall standout and later went on to play with the New York Jets and Miami Dolphins in the NFL. Nine different players carried the ball. Two players recorded at least one reception. Punter John McConnell was only needed once.

“Anytime there is balance, it helps the quarterback,” Huff said. “The first-down efficiency was good. You don’t have to take that first read. You do what the defense tells you. It eliminates mistakes.”

Marshall’s next game is Saturday against Notre Dame in South Bend, Ind. Game time is 2:30 p.m. NBC will televise the game. Ohio State beat the Irish, 21-10, Saturday night in Columbus.

“Routine and consistency,” he said. It’s how well you prepare and execute. And play really hard. If you don’t do that, you don’t win.

“You’re starting to see the culture change. That’s really good. To win championships, you’ve got to have championship habits.”

Sports
Familiar problems resurface as West Virginia falls to 0-2 in Big 12 play
WVU needs a win over Baylor to avoid a 2-4 start for the second consecutive season.
By Joe Brocato
Sports
Texas builds huge early lead, coasts past West Virginia 38-20
Texas jumped out to a 28-0 lead and never looked back as the Mountaineers fell to 2-3.
By Joe Brocato
Sports
Marshall grounds its way past Gardner-Webb, 28-7
The Herd got a strong showing from tailback Khalan Labor and its defense to handle business against the Bulldogs.
By MetroNews
Sports
Follow along: Texas tops Mountaineers, 38-20
West Virginia is striving to have a winning record for the first time this season.
By Joe Brocato
View AllHoppy's Commentary