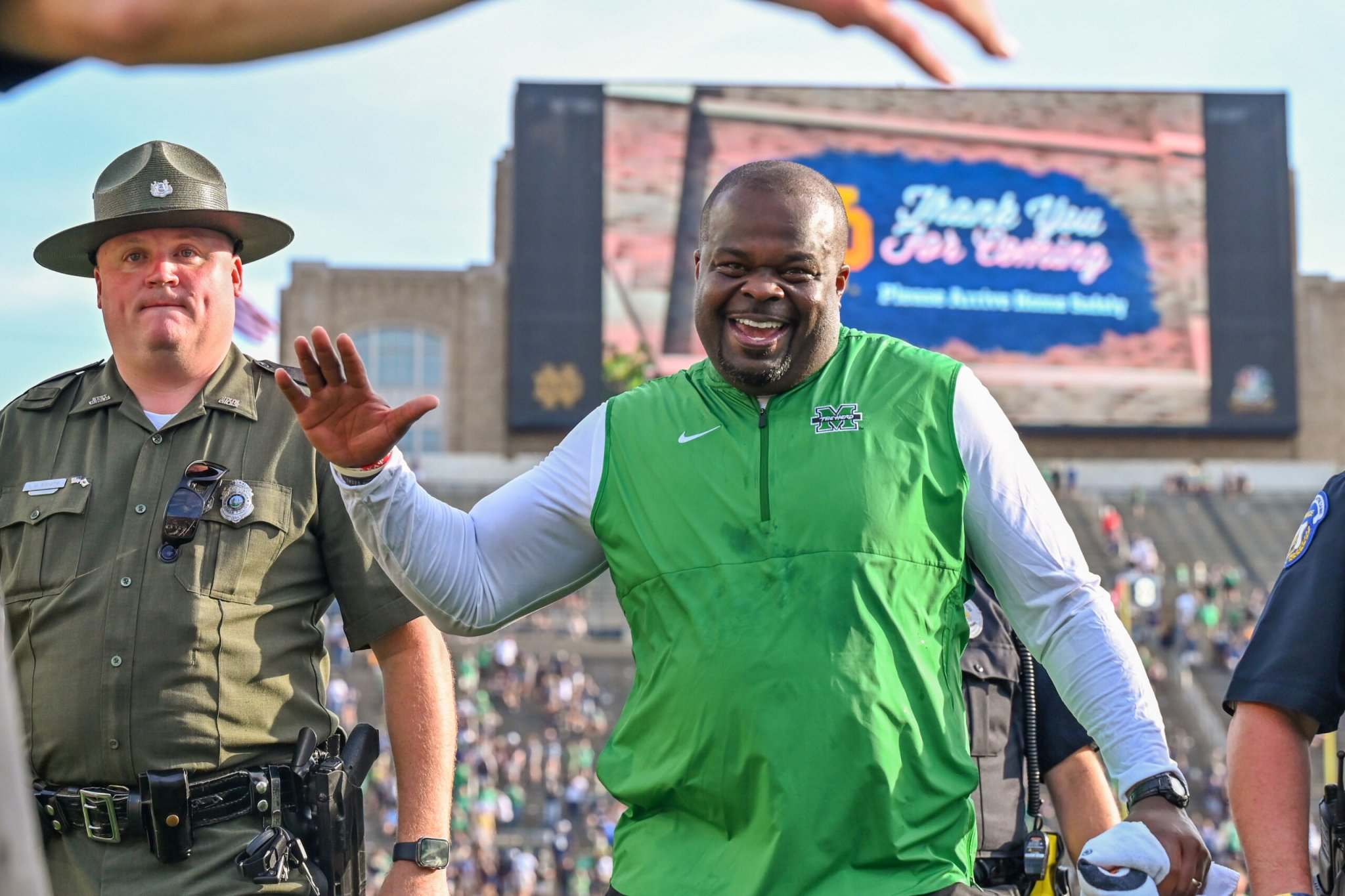 Famed Notre Dame Stadium had a full house on hand for the Fighting Irish’s home opener Saturday against Marshall under new head coach Marcum Freeman. Touchdown Jesus, as is custom, took in the action from a high vantage point on campus near the stadium.

A walk in the stadium Friday evening to get familiar with the surroundings and then a near dominating performance from start to finish Saturday afternoon provided the Thundering Herd with an upset of the No. 8 Fighting Irish, 26-21, in front of 77,622 fans in South Bend, Ind.

It marks the Herd’s first win over a Top 10 team since 2003 when it won at No. 6 Kansas State, and it came before a nationally televised NBC audience.

No doubt one of the many highlights will be the Gatorade dunking Herd coach Charles Huff received as the closing seconds ticked off the clock.

“Proud of the way the team competed,” Huff told NBC sideline reporter Zora Stephenson. “All week we stressed control what we can control. Show up, play hard, execute. We locked into that process. Players kept their focus.”

Defensive and Owen Porter, who had one of the team’s three interceptions, basked in the moment and seeing the sea of fans in green and white in the stadium just go crazy.

Could also call it Marshall firing a shot across the bow of the Sun Belt Conference where it is a first-year member.

“Pretty great,” Porter, who played at Spring Valley High, said of the moment. “We knew we could win. Nobody believed that more than we did.”

Porter got his pick late when he read tight end Michael Mayer running an out route. Porter made the drop and then the pick with 3:01 left.

“I knew where the ball was going,” Porter said, perhaps getting a second game ball. He got one last week when he had a scoop-and-score on a fumbled in the Herd’s 55-3 win over Norfolk State.

Marshall led virtually the entire afternoon, meaning the Irish fans were quite subdued.

Notre Dame took a 15-12 lead with 14:57 left when quarterback Tyler Buchner scored on a 1-yard run and then ran for the two-point conversion.

Not to worry. Marshall’s offense would cover 94 yards in 5:16 (time on the clock as well) to regain the lead at 19-15 when a scrambling Colombi found tight end Devin Miller for a 3-yard TD pass. Oh those visions of the upset. On the drive, Colombi hit Miller for 11 yards, Talik Keaton for 16 and Khalan Laborn ripped off a 42-yard run.

On the next Irish possession, Herd defender Steven Gilmore picked off a pass and returned it 37 yards for the score with 4:35 on the clock. The WOW moment for Marshall fans got even closer.

The Irish did score with 14 seconds left on a 5-yard pass from Drew Pyne to Mayer, before trying a last-second onsides kick. This time the Herd’s Corey Gammage recovered to put an exclamation point on a day Herd fans will talk about forever.

The Herd (2-0) is back in action next Saturday at Mid-American Conference member Bowling Green. Game time is 5 p.m. The NFL Network will carry the game live.

“Hats off to coach Huff, the coaching staff, the entire program,” he said before signing off. “What a performance. Marshall was the better team today.”

“He’ll remember that forever,” he said in his parting comments.

Colombi connected on 16-of-21 attempts for 145 yards. Laborn, who came to the Herd from the transfer portal like Colombi, ran 31 times for a career-best 163 yards. The Herd had 364 total yards.

The Irish had 351 yards and three turnovers. Buchner completed 18-of-32 attempts for 201 yards and led their runners with 44 yards on 13 carries.

Marshall dominated nearly all of the first half and led 9-7 at the break thanks to 21-yard field goal by Rece Verhoff with 15 seconds left in the half.

The Fighting Irish fall to 0-2 for the first time since 2011. The loss marks the first loss to an unranked team at home since Nov. 19, 2016 when Virginia Tech won, 34-31. Notre Dame is home next Saturday against California.

Freeman was asked by the media where the Irish goes now after the 0-2 start.

“This is when we need leadership, at the toughest moments. It has to come out.”